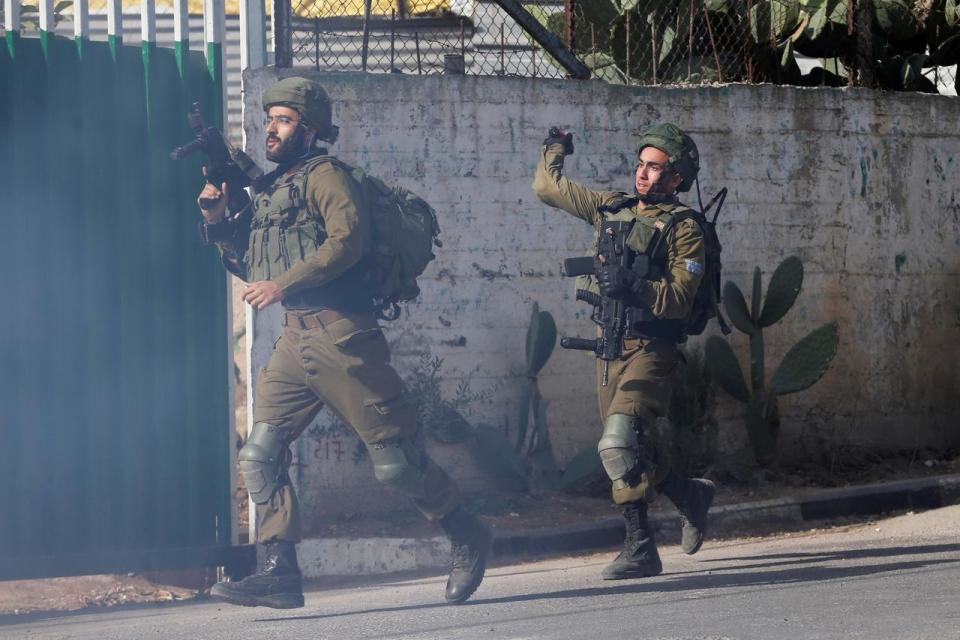 Israeli soldiers run during an anti-Israel protest by Palestinians in al-Arroub refugee camp, in the Israeli-occupied West Bank

From early morning Gaza militants fired rockets into Israel and the Israeli military struck from the air, resuming after an overnight lull.

The bodies of six people killed in Gaza City were brought into Shifa hospital in taxis and ambulances early Wednesday, as relatives wept and screamed. Medics and witnesses said they were civilians who lived in densely populated neighbourhoods.

A father and his son were among the dead with another son badly wounded, said family members.

“They started this, we did not want war,” said one grieving relative.

Islamic Jihad confirmed that two of its militants were killed in separate strikes south of Gaza City during the morning. Medics later said another man was killed by an air strike while on a motorcycle.

The worst fighting in months erupted on Tuesday after Israel killed Abu Al-Atta, a senior commander of the Iran-backed Islamic Jihad militant group, accusing him of masterminding and planning attacks against Israel.

In response to the killing of Atta and his wife, Islamic Jihad fired about 200 rockets into Israel on Tuesday, resuming on Wednesday morning.

Despite attempts by diplomats to restore calm, an Islamic Jihad official told Reuters that his group told mediators it intended to carry on its retaliatory attacks.

“Attempts to restore calm did not succeed, the Islamic Jihad see that it is time to respond to the assassination policy, which was revived by the Zionist enemy,” the official said, asking not to be identified.

“The enemy will pay the price of its foolishness and we are determined to confront this aggression with all our might.”

However there was no sign that Hamas, the much larger Islamist group that controls Gaza, was inclined to be drawn into the fray. Hamas and Israel have managed to defuse previous escalations and avoid a full-scale conflict for the past five years, after fighting three wars from 2008-2014.

The rockets from Gaza sent Israelis rushing to shelters in towns near the Gaza border and deeper in the country, with air raid sirens going off as far north as Tel Aviv and missiles striking Israeli highways and towns. There were no reports of deaths in Israel.

The Israeli military assembled armoured vehicles along the border with Gaza, though a ground incursion into the territory seemed unlikely at this stage.

Prime Minister Benjamin Netanyahu said that Israel, having taken out the Islamic Jihad commander, was not interested in a broader conflict.

“We don’t want escalation, but we are responding to every attack against us with a very sharp attack and response. Islamic Jihad best understand that now rather than when it’s too late for it,” Netanyahu said at the start of cabinet meeting.

In Gaza, schools and most government offices remained closed for a second day, as were schools throughout much of southern Israel.

Israel captured Gaza in a 1967 war and withdrew troops and settlements in 2005. The territory has been controlled since 2007 by Hamas while under an Israeli security blockade, also backed by Egypt, which has wrecked its economy.

KATHMANDU: “There are predominantly two types of movies, ones with profit in mind and ones with cultural and religious practices... Read More...

Her community helped her summit Mt Everest, now she is paying back by hunting new trekking routes and promoting tourism in Helambu
17 hours ago