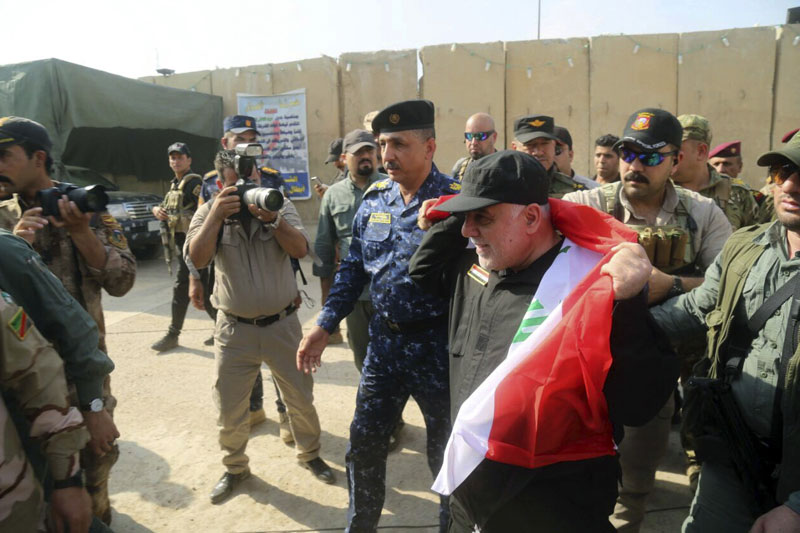 MOSUL, July 10: Iraqi Prime Minister Haider al-Abadi has been celebrating with Iraqi troops in Mosul after they drove Islamic State militants from some of their last strongholds in a nearly nine-month campaign.

But heavy fighting by holdouts continues in parts of the Old City neighborhood near the Tigris River.

A smiling al-Abadi walked among the soldiers, at one point grabbing an Iraqi flag and briefly draping it across his shoulders. Other troops waved flags and pointed their weapons in the air nearby.

Al-Iraqia TV quoted him congratulating "the heroic fighters and the people on the big victory" in Iraq's second-largest city.

Islamic State militants now control less than a mile of territory in the shattered city, but they are using human shields, suicide bombers and snipers in a fight to the death.

Iraq's state TV says the country's prime minister has arrived in Mosul to declare victory over the Islamic State group in the more than eight-month old operation to drive the militants from the city.

Al-Iraqia TV quotes Haider al-Abadi as saying he "congratulates the fighters and the people on the big victory" in the key city.

Dressed in a black uniform of a type worn by Iraqi special forces, al-Abadi was shown on Sunday as descending from a military plane and was greeted by senior security forces commanders.

Backed by the U.S.-led coalition, Iraq launched the operation to retake Mosul in October. Iraqi state TV says government forces have driven the militants from all areas and are "chasing" them in some areas in the city.

The militants captured Mosul, Iraq's second largest city, in a matter of days in the summer of 2014.

Iraqi troops are celebrating the clearing of Islamic State militants from some of their last strongholds in Mosul, but heavy fighting is still underway.

Lt. Gen. Jassim Nizal of the army's 9th Division said Sunday his forces have achieved "victory" in the sector allotted to them, after a similar announcement by the militarized Federal Police. Iraqi special forces are still fighting a few hundred meters (yards) away.

Nizal's soldiers danced to patriotic music atop tanks even as airstrikes sent plumes of smoke into the air nearby.

Iraq launched the operation to retake Mosul in October. IS now controls less than a square kilometer (mile) of territory in Mosul's Old City, but is using human shields, suicide bombers and snipers in a fight to the death.