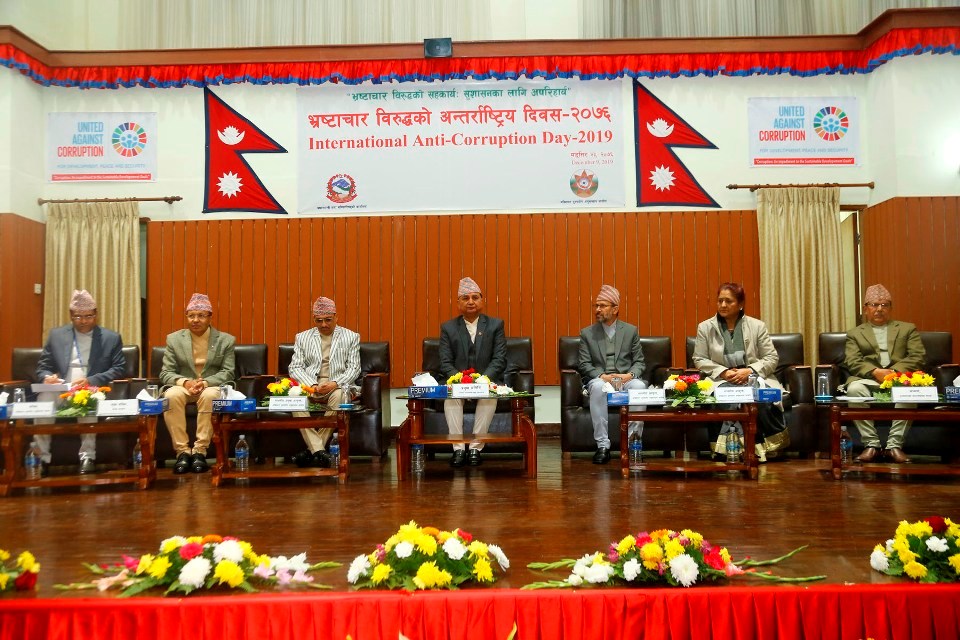 KATHMANDU, Dec 9: Various programs are being organized in Kathmandu on Monday to mark the International Anti-Corruption Day.

The theme of the day is "‘united against corruption", according to the United Nations. December 9, is marked as the International Anti-Corruption day since 2005. The UN General Assembly on October 31, 2003, had adopted the United Nations Convention against Corruption and designated December 9 International Anti-Corruption Day, in order to raise awareness about corruption and of the role of the Convention in fighting and preventing it.

This convention came into force in the year 2005, and since then the day is being observed annually. Government agencies and civil society organizations in Nepal working in the field of promoting good governance organized programs to mark the day.

Commission for Investigation and Abuse of Authority (CIAA), the country's key anti-corruption government agency hosted a program at its headquarters at Tangal in the capital today morning to mark the day.

Addressing the event, Deputy Prime Minister and Defence Minister Ishwar Pokharel vowed to controlling corruption in the country. Pokharel said that anyone found involved in corruption would face tough action. "There is a hearsay that the government is only going after small fry while letting off the big fish. This is not true. Anyone found involved in corruption would face stern action. High profiles would also face action," Pokharel said while reiterating the government's commitment to curbing the corruption in the country.

The deputy prime minister also said that nobody will be politically protected if they are found involved in corruption. He also urged the civil society, non-governmental agencies and concerned stakeholders to join hands with the government to controlling corruption.

Speaking at the event, Chief Commissioner of the CIAA Navin Kumar Ghimire claimed that the anti-graft body registered 351 corruption cases at the Special Court in the fiscal year 2018/19. "This is the highest number of cases registered at the court by the CIAA in its 29-year-long history," Ghimire said adding "Based on the court verdicts, we claim that we have been able to succeed in 88% cases." In the current fiscal year, CIAA remained 112 days and 170 corruption cases were registered in the same period.

To mark the day, the Transparency International Nepal chapter is currently organizing a program in Kathmandu.

The global campaign #UnitedAgainstCorruption is focused on corruption as one of the biggest obstacles to achieving the Sustainable Development Goals (SDGs), the UN headquarters stated on its official website.

“On this International Day, I urge people everywhere to continue to work on innovative solutions to win the battle against corruption and to ensure that precious resources serve the peoples of the world,"  UN Secretary-General António Guterres said in a press statement.

Every year $1 trillion is paid in bribes while an estimated $2.6 trillion are stolen annually through corruption – a sum equivalent to more than 5 percent of the global GDP, according to United Nations. In developing countries, according to the United Nations Development Programme, funds lost to corruption are estimated at 10 times the amount of official development assistance.

Corruption is a serious crime that can undermine social and economic development in all societies. No country, region or community is immune.

"To mark International Anti-Corruption Day, we will leverage the recognition of the multi-year "United Against Corruption" theme and will continue to support the 2030 Agenda, which forms the backbone of the campaign. In addition, the campaign will also have a youth component," the UN said on its website.

'Coordination among provinces needed on law and security'

KATHMANDU, Nov 24: The Commission for Investigation of Abuse of Authority on Sunday filed cases against 38 government employees including... Read More...