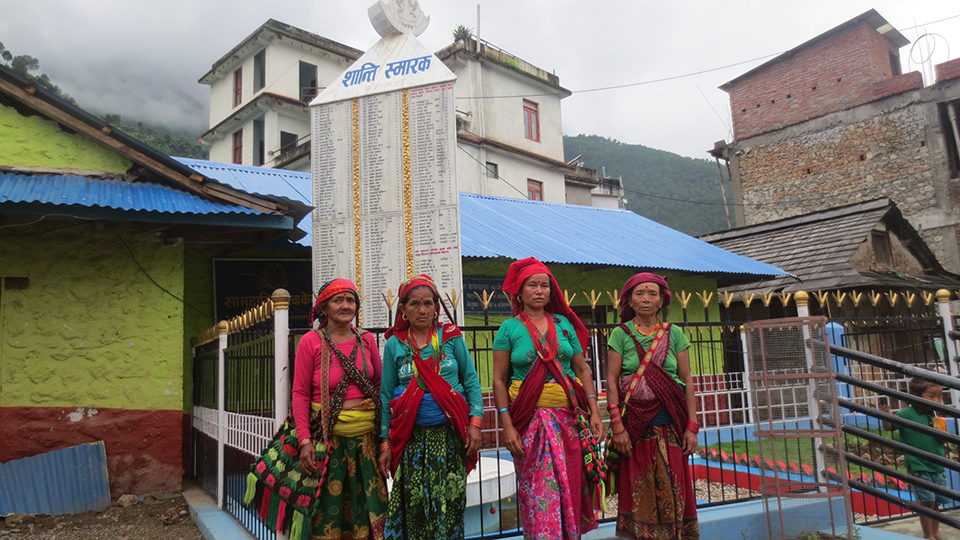 Dil Kumari's eldest daughter Pabitra was just three years old at the time and her youngest son was two.

Dil Kumari, a 48-year-old local of Thawang, knows nothing about the whereabouts of her still missing husband. Thawang is considered the cradle of the decade-long Maoist armed insurgency.

Dhan Bahadur Roka, an employee of state-run Radio Nepal, was abducted by the Maoists in June 2001. The Maoists have neither returned him home alive so far nor produced a dead body.

Roka used to write and read the news in Kham, the language of the Magar community. He had returned to Liwang, district headquarters of Rolpa, to meet his family and the Maoists abducted him when he was headed for Surkhet.

Dil Kumari often fancies that her husband will come back. But her hopes have gradually faded over the years.

“Will he still come back alive? I'm not sure,” said Dil Kumari adding, “Villagers had informed us at the time that the Maoists had already killed him. But we never had confirmation. Still, people reported dead are sometimes found to be still alive.”

Pabitra, the daughter, is now studying forestry science with support from the Federation of Nepalese Journalists. As for Dhan Bahadur's fate, the family remains in the dark.

Omsara Sunar, 40, whose son was abducted, is also in great distress. It's almost 19 years since the 15-year-old was reportedly abducted by the then Royal Nepal Army and the family knows nothing about his whereabouts or his fate. “Who is to blame for this? I have no idea who abducted him. I often feel he will just suddenly turn up.

Sukman Kami, a local of what is now Sunchhahari Rural Municipality, was abducted by the army while he was working the fields in Gam village. The army reportedly killed the 49-year-old in September 2002, but his wife Lalmata was never informed about his fate.

“He was among 12 locals killed and we never received the body,” said Lalmata adding, “My husband was killed in September and the following April my son Nar Bahadur was abducted. " The 20-year-old had gone to Pyuthan for manual work.

Lalmata has remained bereft of both the breadwinners in the family.

Altogether 3,038 conflict victims in Rolpa, one of the districts most affected by the armed insurrection, have registered complaints with the Transitional Justice (TJ) bodies to seek justice. Of them, 116 have sought to find the whereabouts of their missing kin.

The TJ bodies—Truth and Reconciliation Commission and Commission of Investigation on Enforced Disappeared Person—have remained without any commissioners since the last five months after the previous incumbents retired in April.

The appointment of new commissioners has been delayed as the major political parties continue to disagree about the candidates. Rights bodies and the conflict victims themselves are also unhappy over the appointments process and the existing TJ laws.

Delay in investigating conflict-era cases has dampened the hopes of victims that they will ever see justice.

Meanwhile, the conflict victims fear that the privacy of their complaints will be compromised and the alleged perpetrators themselves will target them for taking up their cases with the TJ commissions.

“Privacy can be compromised if the perpetrators get access to the complaints filed against them. We will be deprived of justice if the commissions are left without officials and if the privacy of our complaints is not assured,” said Shree Kumari Roka, whose father was killed during the Maoist insurgency.

KATHMANDU, July 19: While questioning the independence of the ongoing selection process to appoint commissioners at the two transitional justice bodies,... Read More...