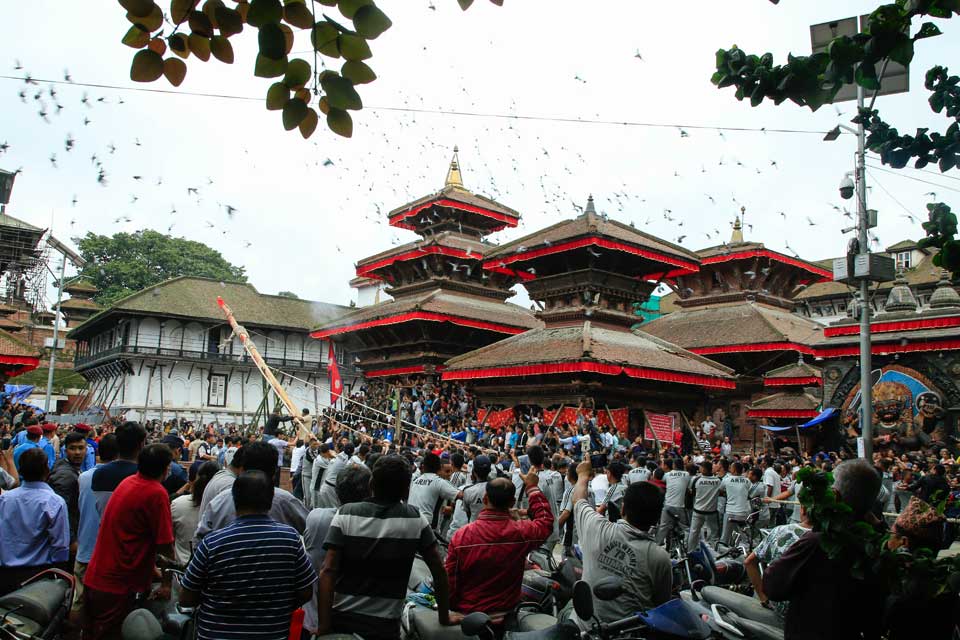 KATHMANDU, Sept 24: The traditional festival, Indrajatra, is being observed today by worshipping the Devraj Indra, the God of rains and good harvest.

This festival is celebrated especially in the three districts of the Kathmandu Valley, and Dhulikhel and Dolakha. The annual traditional festival begins on the Bhadra Shukla Chaturdansi of Nepali month, Bhadra. It is an eight-day long festival.

On the day the festival begins, a sacred wooden pole called Lingo with flags on its top is erected at Hanuman Dhoka, the historic place of Nepal. During the festival, chariot processions and typical cultural songs and dances are performed.

The erected pole with flag is called 'Indradhwojotthan'. On the bottom of the pole, Lord Bhairav is worshipped. The Indrajatra festival is taken as the celebration after conquering the enemies. It is believed that worship of Lord Indra gives one strength.

The wooden pole is brought by performing tantric acts from a jungle of Nala in nearby Kavre district. The pole is made holy with various rituals at Bhotahiti, Kathmandu.

Today, the Head of the State, the President, observes the chariot processions of Shree Kumari, Shree Ganesh and Shree Bhairav at historic Hanumandhoka. Kumari is worshipped as the Living Goddess by the President on the occasion, and prasad received.

The government has also announced a public holiday today in Kathmandu valley.

In pictures: Indrajatra at Basantapur

KATHMANDU, Sept 15: The traditional festival, Indrajatra, is being observed by worshipping the Devraj Indra, the God of rains and... Read More...