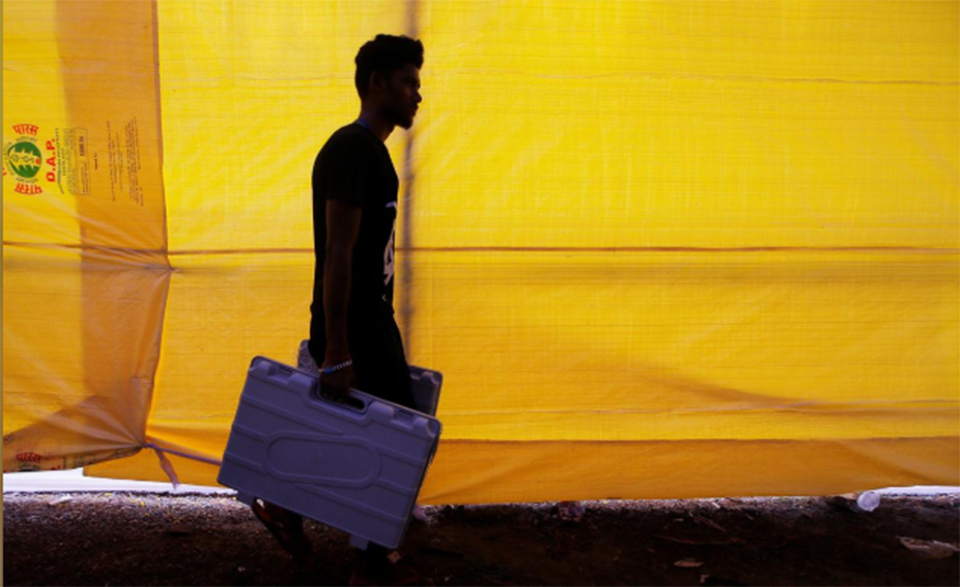 An election staff member carries Electronic Voting Machines (EVM) after collecting them from a distribution centre ahead of the fifth phase of general election in Howrah on the outskirts of Kolkata, India, May 5, 2019. REUTERS/Rupak De Chowdhuri

NEW DELHI/SRINAGAR, May 6: India’s northern heartland began voting on Monday in the fifth phase of a staggered general election, with Prime Minister Narendra Modi hoping his record on national security will win him a second five-year term.

More than 87 million people across seven states are eligible to vote on Monday, including in the northern state of Jammu and Kashmir, where Muslim separatists have been fighting the security forces for decades.

The separatists have called for a boycott of the vote in Muslim-majority Kashmir and protesters threw stones at polling stations and at least one person was shot and wounded when police opened fire, police said.

Militants also threw a grenade and a petrol bomb at polling stations but there were no injuries.

The seven-phase general election began on April 11. The last votes will be cast on May 19.

Monday’s voting includes some of the most electorally important regions in the north, including Uttar Pradesh, the state with the most members of parliament.

Uttar Pradesh is also where Hindu nationalist groups have aggressively pushed for the building of a temple on the ruins of a 16th century mosque, in the city of Ayodhya, which has become a flashpoint in tension with minority Muslims.

“The main issues here are the temple, nationalism and the country’s economic development,” said Sharad Sharma, an Ayodhya-based spokesman for the Vishwa Hindu Parishad, or the World Hindu Council, a group linked to Modi’s Hindu nationalist Bharatiya Janata Party.

Voting is also taking place in strongholds of the main opposition Congress party in Uttar Pradesh, including the Amethi constituency of Congress leader Rahul Gandhi, and Rae Bareilly, which is represented by his mother, Sonia Gandhi.

Modi campaigned on his national security record, in particular his tough stand against rival Pakistan following a suicide bomb attack by a Pakistan-based militant group that killed 40 Indian paramilitary police in the Indian part of Kashmir in February.

Hundreds of additional troops have been deployed in Kashmir for the vote and polling staff and equipment was airlifted in.

Turnout was very low in the first hour of voting in the Himalayan region, an election official said.