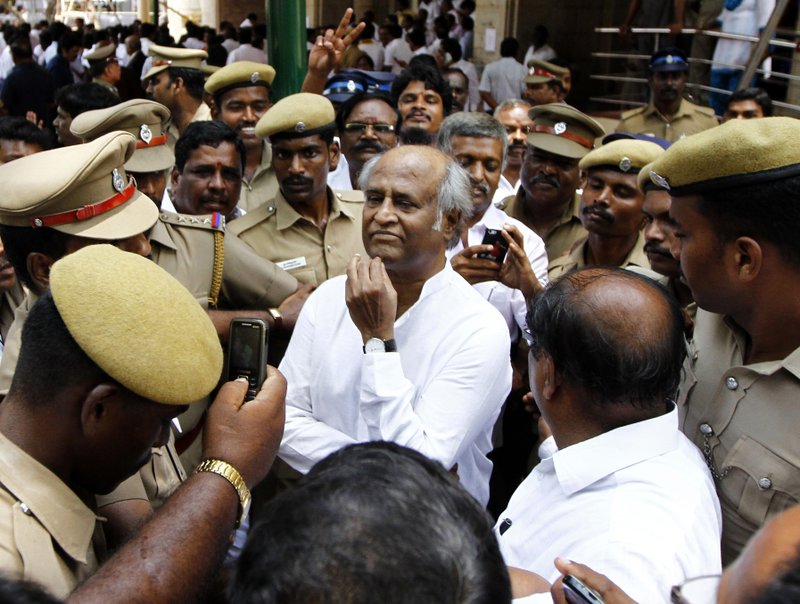 NEW DELHI, Dec 31: Movie superstar Rajinikanth is entering politics in his southern Indian state with a plan to launch his own party, calling it his duty.

The 67-year-old said Sunday to his cheering supporters that his objective is to change the system and bring good governance to Tamil Nadu. He called for a political change and appealed to his fans to bring all sections of society into the fold.

“I do not want cadres. I want watchdogs,” New Delhi Television channel quoted Rajinikanth as saying.

Rajinikanth is one of India’s most popular stars and many of his 175-plus films since 1975 have broken box-office records, mostly in Tamil and Telugu languages.

His political prospects appear bright following a huge political vacuum created by the death of Jayaram Jayalalithaa, an iconic political figure, and the near-retirement of 93-year-old Muthuvel Karunanidhi, the leader of the opposition Dravida Munnetra Kazhagam party.

C.N. Annadurai and M. Karunanidhi were both scriptwriters who went on to become chief ministers. M.G. Ramachandran, a top actor-turned-politician, also had a strong screen presence and following among masses.

Born Shivaji Rao Gaekwad, Rajinikanth worked as a bus conductor for three years before joining an acting school. He started in small roles as a villain in Tamil cinema and worked his way up, landing roles in Bollywood, the Hindi-language film industry based in Mumbai.

The Indian government honored him with a top national award — the Padma Bhushan in 2000, and the Padma Vibhushan in 2016 — for his contributions to the arts. At the 45th International Film Festival of India in 2014, he was conferred with the Centenary Award for Indian Film Personality of the Year.

Bollywood superstar Amitabh Bachchan also tried his hand in politics as a member of India’s Parliament representing the Congress party, in support of his friend, the then-Prime Minister Rajiv Gandhi, in 1980s. He resigned after three years following allegations that he accepted bribes in the purchase of artillery guns. His name was later cleared from the scandal.