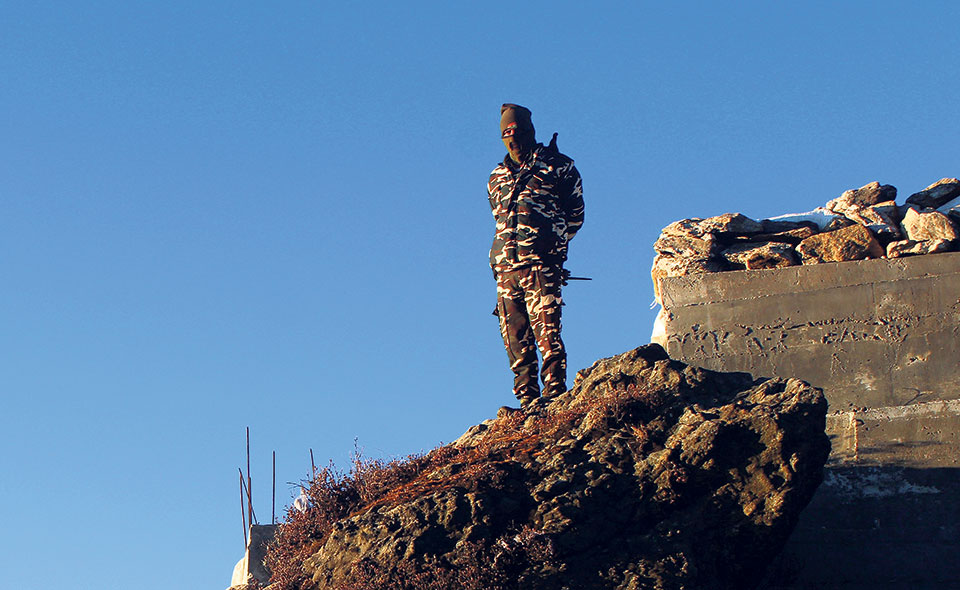 ILAM, Nov 18: The Indian border security personnel have stopped tourists from visiting a viewpoint, which is at an altitude of 3,636 meters in Sandukpur in Ilam district.

The Sashastra Seema Bal (SSB) of India has put a notice board on the way to the viewpoint, stopping tourists from visiting the famous site. The viewpoint belongs to Nepal. The SSB has also barred tourists from taking pictures of the site. Mountains of three different countries can be seen from the viewpoint.

In the past, SSB hadn’t prevented tourists from visiting the viewpoint. Tourists say the Indian security personnel had asked them to delete the photos taken from the viewpoint.

Meanwhile, the plan of Sandakpur Rural Municipality to construct a view tower in Sandakpur at a cost of Rs 10 million was also stopped by the Indian side. The Indian side had claimed that the region is in the Dasgaja area.

“Due to the obstruction by the Indians, the rural municipality couldn’t construct a viewtower in Sandakpur,” said Udaya Rai, chairman of Sandakpur Rural Municipality, adding that the Indian side has stopped infrastructure development in several areas which belong to Nepal.

“We were building the route in the region that belongs to Nepal, but the Indian side obstructed the construction claiming that the region is in Dasgajha (no man’s land) area,” he said, adding that the Indian securities had pointed a gun at him. But, after the locals protested against the move of the Indian side, the trekking route was constructed along the Gauribas-Kalpokhari route.

Locals say that the number of Indian security personnel at the border has increased in recent times. Meanwhile, the Indian side removed the notice board when Khinu Langwa Limbu, a provincial assembly member of Province 1, visited Sandakpur a few days back. The SSB officials again placed the notice board after Limbu returned from Sandakpur.

KATHMANDU, June 23: A landlady arrested on the charge of refusing to rent out a room in her house to... Read More...

CHITWAN, June 24: Blood donation on birthdays is gaining momentum as a campaign in Chitwan where blood shortage is a... Read More...

ROLPA, June 23: Three people have been killed in a landslide in Rolpa. ... Read More...