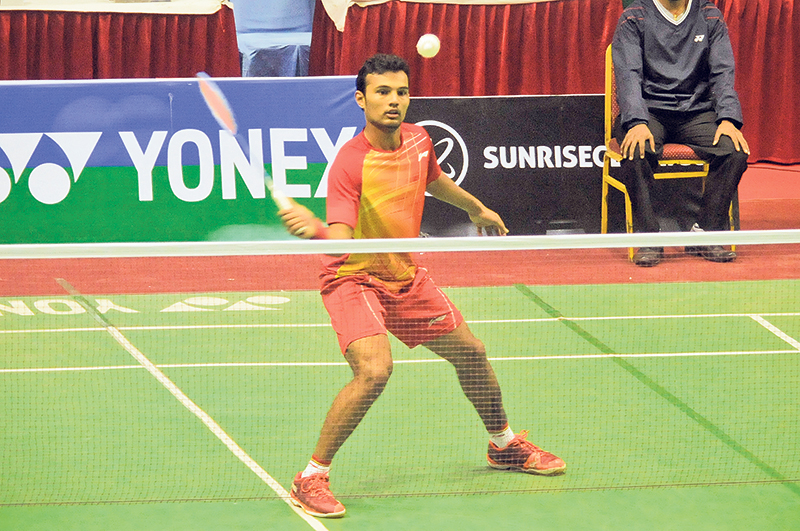 Abhisek Yelegar of India plays against Cao Cuong Pham of Vietnam during a semifinal match of the BWF Yonex Sunrise International Series 2016 badminton tournament at the covered hall of Tripureshwar, Kathmandu on Thursday. (Bijay Gajmer/Republica)

KATHMANDU, Dec 16: Indian players dominated the ongoing BWF Yonex Sunrise International Series 2016 badminton tournament as they made to the finals of four out of five events included.

The tournament being held at the Dasharath stadium, Tripureshwar, will see all India finals in men’s singles, women’s doubles’ and mixed doubles’ while men’s doubles will be between Indian and Pakistani shuttlers. Similarly in the summit clash of the women’s single’s event, will see Indonesian shuttler vying with Vietnamese opponent.
To set the all India final in men’s singles event, Siddharth Thakur and Abhisek Yelegar overcame Vietnamese players Duc Phat Le and Cao Cuong Phanm respectively. Fifth seed Siddharth who had beaten Nepal’s number one Ratnajit Tamang in quarterfinal registered 21-19 21-18 victory over seventh seed Duc. Similarly, second seed Abhisekh beat Cao in the third set with score of  21-13, 6-21, 21-16.

Both Indian finalists Siddharth and Abhisekh know each other very well since they both are product of Anup Sridhar Badminton Academy, Bangalore. After the semifinal, both players expressed similar views regarding the final stating that the match will be 50-50 affair. “Since we both are from same academy, we train together and know each other’s strengths and weaknesses. So we both have equal chance of winning the final,” said Siddharth, who is ranked 10th in senior players ranking in India.

bhisekh also said that final match against his fellow countryman will be tricky given the experience of playing each other. “One who plays better on that particular day, will clinch the title,” said Abhisekh who is ranked 20th in Indian senior players ranking.
Similarly in the women’s doubles event, the Indian pair of Jakkampudi Meghana and Poorvisha S Ram has set the summit clash against the fellow countrywomen Anoushka Parikh and Harika Veludurthi. The pair of Jakkampudi and Poorvisha eased past the Bangladeshi pair of Aktar Shapla and Alina Sultana 21-8, 21-15. Similarly another Indian pair of Anoushka and Harika registered wins of 21-16, 21-13 against the pair comprising of Iranian Aghaei Hajiagha Soraya and Indonesia’s Devi Yunita Indah Sari.

In the mixed doubles’ event, the pair of Venkat Gaurav Prasad and Juhi Dewangan    of India is set to battle against the opponent of same country comprising of Saurabh Sharma and Anoushka Parikh. In the mixed doubles’ semifinal, the pair of Venkat and Juhi defeated the Bangladeshi pair of Mohammad Salman Khan and Alina Sultana 21-12, 21-13. Similarly, Saurabh and Anoushka edged past another Bangladeshi pair of Mohammad Anamul Haque and Aktar Shapla 21-15, 21-13.

Women’s singles’, the only event of the tournament whose final will be without any Indian players will see Indonesian shuttler Devi Yunita Indah Sari vying against top seed of the tournament Thuy Linh Nguyen of Vietnam. Devi overcame Thi Phuong Thuy Tran of Vietnam 21-17, 21-16 while Thuy edged past Iranian player Aghaei Hajiagha Soraya 21-17, 21-6.

Thuy of Vietnam who had beaten Nepali opponent Sichhya Shrestha in the quarterfinal said that she was confident of winning the title. “I am ready for the final. I think I have done pretty well until now. Thus I hope to continue the momentum and become champion,” said Thuy who is first seed of the tournament.

"Do not impose tax on my period" (Photo feature)
17 hours ago
'No changes made in the tax imposed on sanitary pads in new budget'
16 hours ago
Nepal recorded a BoP deficit of Rs 38.75 billion during mid-July and mid-August
9 hours ago

Is the delta variant of the coronavirus worse for kids?
8 hours ago