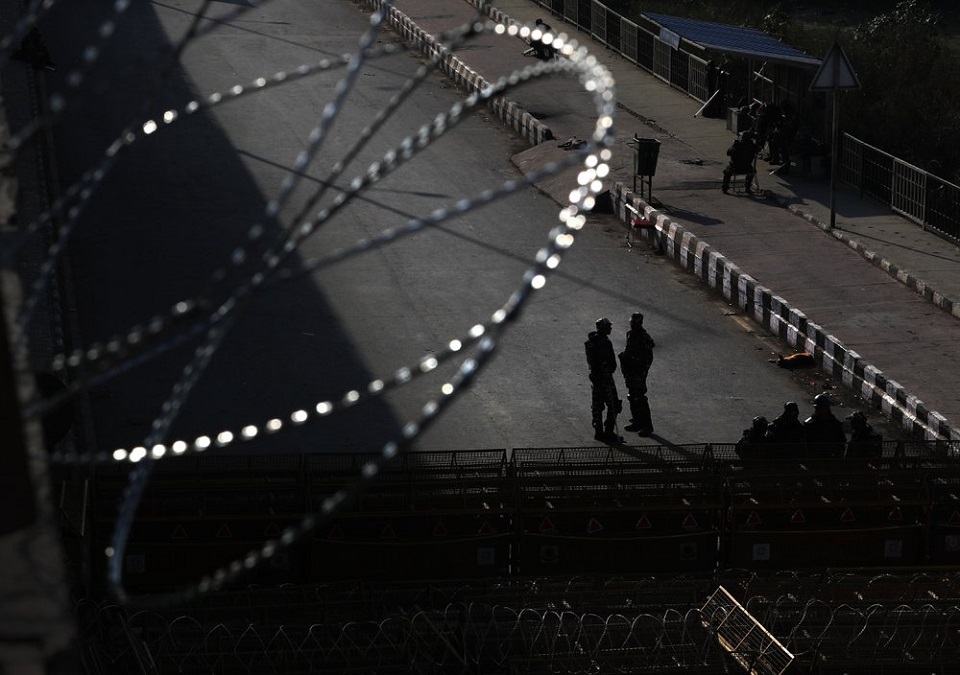 Indian paramilitary force soldiers stand guard at a heavily barricaded road along one of the three main protest sites outside New Delhi's border to thwart the growing farmers' protest on the edges of the capital, at Delhi-Uttar Pradesh border, in New Delhi, India, Friday, Feb. 5, 2021. India's agriculture minister on Friday defended the new agriculture reform laws in Parliament, dampening hopes of any quick settlement with tens of thousands of protesting farmers demanding their repeal by blocking three highways connecting New Delhi to northern India for over two months now. (AP Photo/Manish Swarup)

NEW DELHI, Feb 6: Tens of thousands of protesting Indian farmers plan to blockade highways across the country for three hours Saturday to press their demands for the repeal of new agricultural laws.

Authorities deployed thousands of security forces mainly outside India’s capital, where farmers have camped at three main sites for more than two months. They say they won’t leave until the government rolls back the laws it says are necessary to modernize Indian agriculture.

The scheduled highway blockade is set to start at noon local time (0630 GMT).

Several rounds of talks between farmers with the government have failed to produce any breakthroughs.

The farmers say the laws will leave them poorer and at the mercy of corporations. Their action is a major challenge to Prime Minister Narendra Modi.

On Friday, Agriculture Minister Narendra Singh Tomar defended the laws in Parliament, dampening hopes of a quick settlement as he made no new offer to resume talks with the farmers.

The largely peaceful rally turned violent on Jan. 26, India’s Republic Day, when a group of of farmers riding tractors veered from the protest route and stormed the 17th century Red Fort. Hundreds of police officers were injured and a protester died. Scores of farmers were also injured but officials have not given their numbers.

Farmer leaders condemned the violence but said they would not call off the protest.

Since then, authorities have heavily increased security at protest sites outside New Delhi’s border, adding iron spikes and steel barricades to stop the farmers from entering the capital.

RJPN calls off protest after change in poll schedule

KATHMANDU, June 1: The Rastriya Janata Party Nepal (RJPN) on Wednesday called off its protest program which the party had announced... Read More...

KATHMANDU, Feb 13 :The agitating staffers of the local bodies have halted their work across the country on Sunday. They claimed... Read More...

ITAHARI, Oct 29: Chairman of Sadhbhawana Party Rajendra Mahato on Saturday said that the constitution should be implemented only after... Read More...