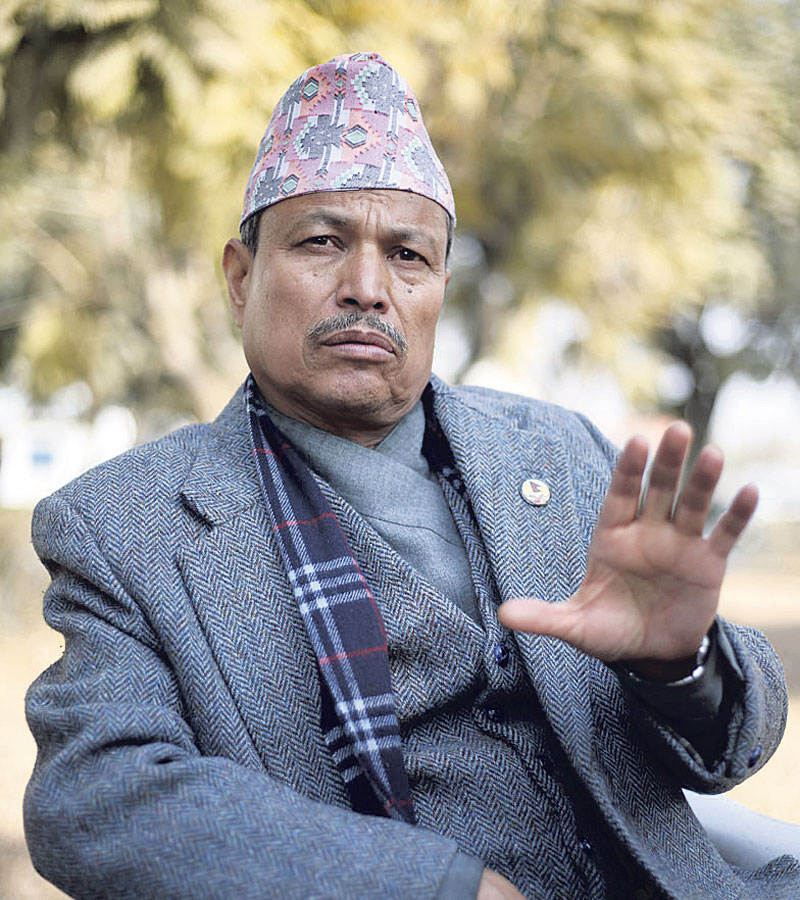 KATHMANDU, Aug 15: CPN-UML Vice Chairman Bhim Rawal has said that 15 various Indian dams and embankments near the Nepal-India border, the Indian river-linking project and the exploitation of the Chure area and river banks have caused the flood disaster in the tarai.

Tabling a motion of public importance  concerning floods, inundation, landslides and rescue and relief  in  parliament on Tuesday, Rawal said that most of the Tarai-Madhes area has been submerged due to dams built unilaterally on the Indian side near  the Nepal border.

“Our lands are inundated from the Mechi to Kanchanpur due to five different kinds of dams of different capacities and names built in India near the border,” said Rawal at the House meeting. “If we don’t take  up  this issue in  parliament, the tarai area will have to face more disasters in  future,” he said.

Rawal said the Laxmanpur dam and Kalkalwa embankment near  Banke district  have obstructed the natural flow of water, resulting in inundation in the district. “As many as 1,000 individuals of 300 families have been stranded in the district without food and water,” said Rawal.

According to him, the Mahali Sagar dam has been build  in Kapilvastu district just 10 km from the Nepal-India border, which is against international law. “The international convention on embankments states that any country should ask  the adjoining country about the effect of such embankments before starting construction,” he said.

He also said that the Rasiawal Khurdlotan dam  is located just six km away from Lumbini, the birthplace of Gautam Buddha and it is obstructing the flow of the Danab and Danda rivers.

The UML lawmaker claimed that the 3.5 km long Tanakpur dam along the Mahakali river in Kanchanpur district has caused inundation in  Nepal.

Likewise, the Sarada dam built just 11 km from Mahendranagar  has caused inundation in the Chandani and Dodhara areas. “Though India had to provide about 292 ropani of land in compensation to the Nepal side, it has not done so yet,” he said.

Rupendehi district, obstructing the natural flow of the Suiya river, according to Rawal.

Over a dozen villages in Nawalparasi district have been submerged after the Narayani river was  blocked by the Gandak dam, he said.

According to  Rawal, the Lalbakaiya dam in Rautahat district should have been build on both sides, but it has been build in such a way that the Nepal side is  submerged every year. “As a result, Gaur and other areas have been submerged. Gaur Municipality has been  over 90 percent submerged, according to local MPs,” he said. Another embankment has been built 10 km from the border in Rautahat, causing inundation in areas around Gaur every year.

The Bagmati embankment is also causing inundation in Sarlahi district and the embankment at the Kamala river has been inundating Dhanusa and Siraha districts, said Rawal. “The Indian side has linked the Jaynagar irrigation project to  Kamala embankment, causing flooding on the  Nepal side,” he said.

UML leader Rawal said that though international law bars the building of any structures along no-man’s-land, a three-km dam has been built on the  Gagan river near  Harkatti village close to Pillars No 256-1 to 4. This has  caused inundation in six villages in Siraha.

A dam built on the Khando river near  Lalpatti has caused inundation  in Saptari district most of the time. The five-km dam built just five km  from Pillars No 222 and 223 has blocked the flow of the river, according to Rawal.

The Koshi dam has caused inundation in 6,800 hectares   in Saptari and Sunsari districts and India has been  benefitting from this dam unilaterally, he said. India has built a 300-meter-long embankment on the Bakraha river near  no-man’s-land in Morang district, blocking the flow of the river to the Indian side, he informed  parliament.

According to Rawal, India has been building a 12,500 km long river linking project in the bordering areas without consulting  the Nepali side. This comprises barrages, dams, embankments and canals and is almost sure to cause inundation on the Nepali side, he said.

“Five different  commissions have been formed between Nepal and India to settle water resources and inundation-related problems. But such problems have not been settled due to instability in Nepal,” Rawal said. Encroachment of river banks and exploitation of the Chure  are also major causes of flooding and inundation. “Border area dams have made this problem worse,” said Rawal.

Earlier, Home Minister Janardan Sharma  said that Nepal should study the matter before signing  any international treaty and bilateral agreement.

KATHMANDU, Sept 18: Eight years ago, during his first visit to India as the prime minister of Nepal, Prime Minister... Read More...

Can you get the coronavirus twice?
18 hours ago
43 diagnosed with COVID-19 in Birgunj including medic, army personnel and banker
3 minutes ago