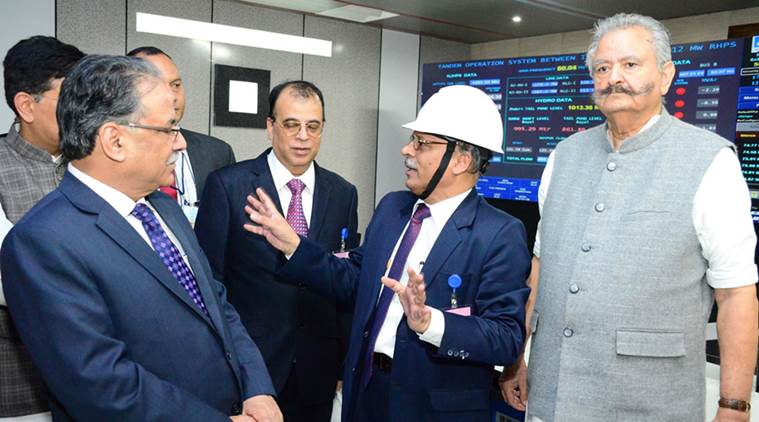 KATHMANDU, Sept 18: Eight years ago, during his first visit to India as the prime minister of Nepal, Prime Minister Pushpa Kamal Dahal had gone to observe the Tehri dam in Uttarakhand state.

Similarly during his second stint as PM of Nepal, Dahal who is currently on a state visit to India, observed the Nathpa dam in Himachal state of India on Saturday.

Former Prime Minister KP Oli, too, had gone to Uttarakhand to observe the Tehri dam during his India visit.

Though the leaders of Nepal seem eager to observe the big hydropower projects in India, India is considered one of the weakest countries in the world in terms of exploiting its hydropower potential.

Why does visiting some successful Indian hydropower projects become a priority for Nepali leaders though India hasn't been able to exploit even one-fourth of its total hydropower potential?

"India is not a very successful country when it comes to exploiting hydropower. It has hardly been able to exploit one-fourth of its hydropower potential," Khadga Bahadur Bisht, President of Independent Power Producers' Association of Nepal (IPPAN), told Republica Online, "Coal is the chief source of energy in India. They have started focusing on solar energy after environmental issues were raised."

So far, India has generated 42,783 MW of hydroelectricity. This year, production of renewable energy has taken over hydropower projects.

The country has further stressed on solar and renewable energy production of late.

Experts in the sector claim that Nepal which is preparing to construct huge hydropower projects cannot learn much from India.

On Saturday, Prime Minister Dahal visited the Nathpa Jhakri Hydropower project in Himanchal state of India. Built on the Satluj river, the capacity of the project is 1,500 MW.

In 2008, PM Dahal had visited the Tehri dam of Uttarakhand state.

"A country facing so much of energy crisis like Nepal should build reservoir based hydro projects," says Bista, "Therefore, maybe his priority is to learn from such projects. It might be fruitful."

Bista further adds, "But the government in Nepal changes every nine months. How can the PM implement in Nepal what he learns from visiting such projects?"

Hydropower entrepreneur Pradhan also shares the same thought. “The problem is our bureaucracy tries to control everything,” said Pradhan, “Unless we solve this problem, tours alone won’t make any difference.”

Former Prime Minister KP Sharma Oli had also visited the Tehri Dam during his India visit. The hydropower potential of the 250 meters tall dam is 1000 Megawatts.

Officials often compare this project with the Budhigandaki project to be built on the border of Dhading and Gorkha districts.

The project which is to be built to minimize the current energy crisis in the country will displace 45,000 people.  The plan is to generate 1,200 MW of electricity from this project.

While constructing the Tehri Dam, environment activist Medha Patkar had voiced against the project claiming that it had caused an environmental hazard and also displaced 100,000 people.

Pradhan recalls that Nepali experts had resolved the problems seen during the construction of the Nathpa Jhakri project which was built with an investment of USD 2 billion in 11 years.

“The turbines of the hydropower project didn’t even last one-tenth of its predicted time period,” said Pradhan, “There was a huge debate between the project developer and the turbine manufacturing company. The problem was solved after studying Butwal Power Company.” The turbine was affected by siltation.