KATHMANDU, Oct 14: Indian Army Chief Manoj Mukund Naravane will visit Nepal next month, the Nepal Army headquarters said in a press statement on Wednesday. The Army headquarters, however, has not disclosed the specific dates for the visit.

Nepal Army Spokesperson Santosh Ballav Poudel told Republica that Naravane will be visiting Nepal in November, and the two militaries are in touch to finalize exact dates.

Poudel said that there have been discussions between the two sides to fix the exact dates for the visit.

An invitation was extended to the Indian Army Chief by the Nepal government on February 3 this year, according to the press release.

Sources said that the proposed visit of the Indian Army chief could not take place in subsequent months following his controversial remarks in May on the road to Lipu Lekh, a sovereign Nepali territory which India claims as its own despite Nepal’s objection.

Without naming any specific country, Naravane on May 14 had claimed that the Lipu Lekh Pass is not a dispute and that Nepal has raised the matter at the behest of someone else, alluding to China. The statement further soured the ties between the two countries. Even former Indian diplomats criticized the remarks made by Naravane calling it undiplomatic.

His ‘demeaning’ remarks drew sharp criticisms in Nepal, prompting protests in various parts of the country, marking a new low in India-Nepal relations. However, Indian Army Chief softened his stance later in June.

Continuing a tradition of friendship between the two militaries, Indian Army Chief Naravane will be decorated with the honorary rank of General of Nepal Army during the visit, according to Poudel.

During his visit, President Bidya Devi Bhandari, the Supreme Commander of Nepal Army, will confer the honor on General Naravane.

Conferring the highest rank to the chiefs of each other’s militaries is a tradition that has been followed by Nepal and India since 1950 after then Indian army Chief General KM Cariappa visited Nepal. 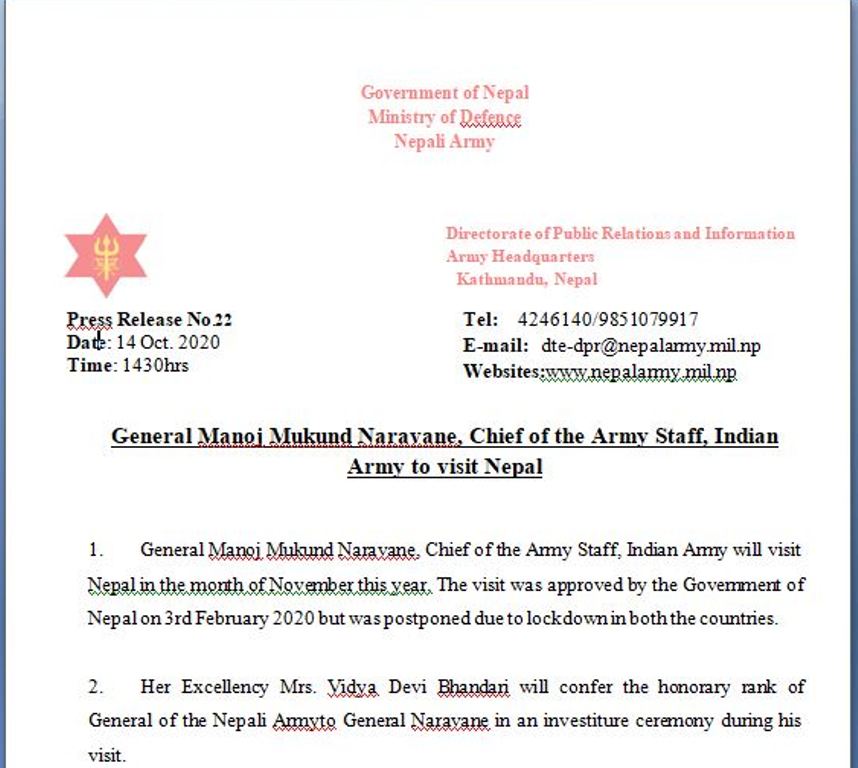