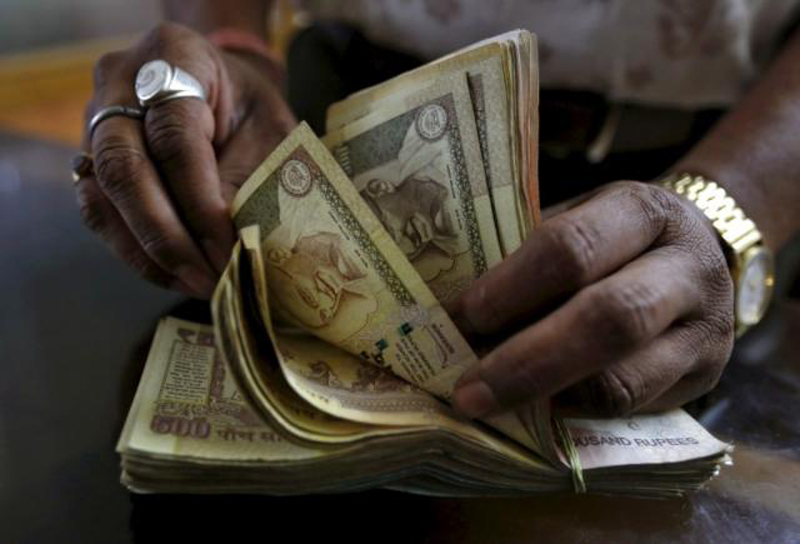 A money lender counts Indian rupee currency notes at his shop in Ahmedabad, India, in this May 6, 2015 file photo. REUTERS/AMIT DAVE/FILE PHOTO

MUMBAI, Nov 8: Indian Prime Minister Narendra Modi on Tuesday announced that 500 and 1,000 rupee banknotes would be withdrawn from circulation at midnight, saying it was part of a crackdown on rampant corruption and counterfeit currency.

The surprise step appears designed to bring billions of dollars worth of cash in unaccounted wealth into the mainstream economy, as well as hit the finances of Islamist militants who target India and are suspected of using fake 500 rupee notes to fund operations.

"Black money and corruption are the biggest obstacles in eradicating poverty," Modi said in an address to the nation.

New 500 and 2,000 rupee denomination notes will be issued at a later date, he added.

Modi's ruling Bharatiya Janata Party came into power in 2014 promising to bring billions of dollars of black market money into the regular financial system. Critics said it had failed to deliver on that promise.

Tuesday's announcement comes just over a month after the government raised nearly $10 billion through a tax amnesty for Indians to declare hidden income and assets.

A report by Washington-based think-tank Global Financial Integrity estimated that India lost $344 billion in illicit fund outflows between 2002 and 2011.

Modi also said militants operating against India were using fake versions of the 500 rupee note, worth about $7.50 at current exchange rates.

"Terrorism is a frightening thing ... But have you ever thought about how these terrorists get their money? Enemies from across the border have run their operations using fake currency notes. This has been going on for years," Modi said.

India accuses its neighbour Pakistan of harbouring militants who have launched attacks on its troops, particularly in the disputed Himalayan region of Kashmir which both countries claim. Pakistan denies the accusations.

Some officials and experts said Tuesday's move was the biggest in decades aimed at fighting graft.

"It is like a surgical strike on black money," said Revenue Secretary Hasmukh Adhia.