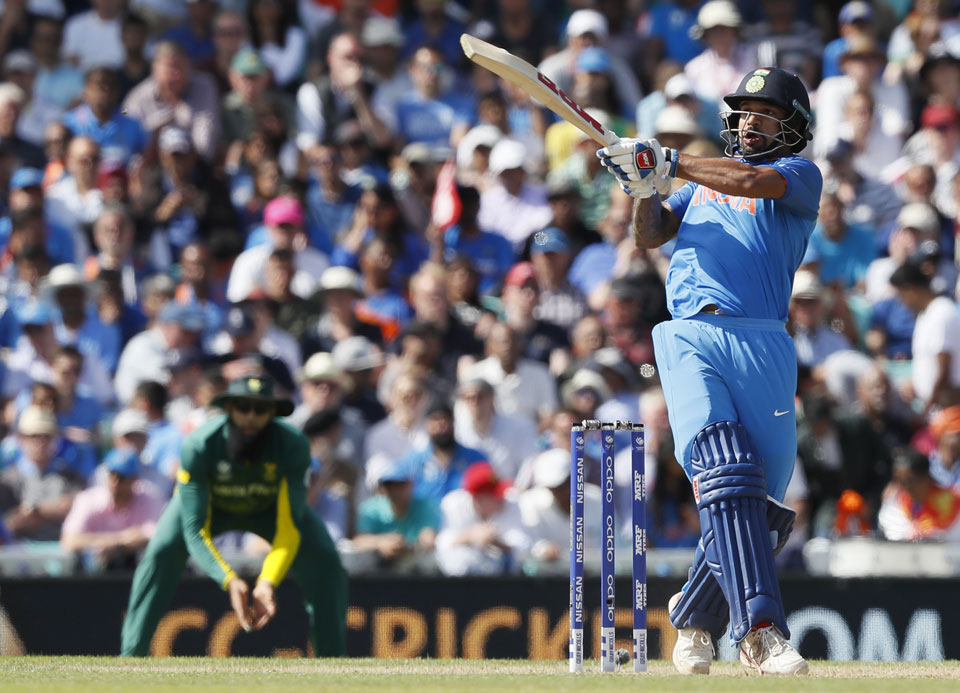 LONDON, June 12: India strolled into the Champions Trophy semifinals after routing South Africa for 191 at The Oval on Sunday.

India made 193-2 thanks to Shikhar Dhawan's 78 and Virat Kohli's unbeaten 76, and looks like playing Bangladesh in the second semifinal on Thursday at Edgbaston.

Surprising losses in their last outings meant the heavyweight matchup at The Oval wouldn't decide first and second in Group B, as predicted before the tournament, but instead decide who of defending champion India or top-ranked South Africa was going home early.

Not India, who improved to 4-0 against the South Africans in Champions Trophy history, and knocked them out for a third time.

Both captains preached calm would be crucial, and it was South Africa who failed to show it in near-perfect conditions in south London. From 140-2 in the 29th over, South Africa went an ugly 51-8 the rest of the way.

"The way we lost was the most disappointing part," captain AB de Villiers said. "Through soft dismissals we lost our way, and that was the part for me that hurt the most."

De Villiers was the first culprit. De Villiers, under pressure after scoring 4 and 0 in the Trophy, picked the lengths easily and looked comfortable in making 16 off 12 balls. But when Faf du Plessis guided a ball to point, Hardik Pandya was fast on it and accurate on the throw and de Villiers was caught well short despite diving.

David Miller came in and faced three balls when he was run out in a comical mix-up. Du Plessis cut to third man, set off, hesitated, set off and changed his mind again and dived back. He made it to his crease a fraction before Miller, who was sent back to the dressing room.

The fourth and fifth run outs by India in this tournament sent a shiver through the South Africans that they didn't shake off.

Trying to explain the run outs, de Villiers said: "Two guys try and trust each other to pull off a run or two and sometimes ... you come up short. I don't know what happened there today. I wouldn't like to blame guys."

Du Plessis was eventually bowled by Pandya for 36, Chris Morris was out for 4, and Duminy was the last specialist batsman with 13 overs left. He couldn't rally the tail, and the innings finished, appropriately, on a run out.

"Getting their big hitters early was a bonus," Kohli said. "When you get two run outs pretty quickly, the mindset totally changes. They hesitate going for their shots, we got them attacking fielders, and we asked the bowlers to make them play difficult shots."

The South Africans were frustrated by spinners Jadeja, who took 1-39 from his 10 overs without conceding a boundary, and Ashwin, playing his first one-day international since January because of the left-handers in South Africa's lineup. He took 1-43.

They were able to rest easy in the clubhouse while the top-order batsmen took care of business before a sell-out crowd of 22,828.

South Africa has the two highest-rated ODI bowlers in pacer Kagiso Rabada and spinner Imran Tahir, with backup from former No. 1 Morne Morkel. But they made little impact.

Morkel was a threat early, and deserved to take Rohit Sharma's wicket for 12 in the sixth over.

Kohli walked into medium-pacer Andile Phehlukwayo and launched him over mid-on for his first six, and reached his fifty off 71 balls. Dhawan got to his chanceless fifty with a boundary over mid on. He departed with victory in sight having hit a dozen fours and a six.

He and Kohli combined for 128 off nearly 25 overs. They were calm and assured. Unlike South Africa again.

BIRMINGHAM, June 15: India is set to use an unchanged team for the Champions Trophy semifinal match against Bangladesh after... Read More...

Manaslu avalanche: One killed, several others injured
37 minutes ago

Avalanche in Manaslu mountain base camp, bad weather makes rescue difficult
2 hours ago
Sabitra's request to find her husband who disappeared in Italy five years ago
2 hours ago