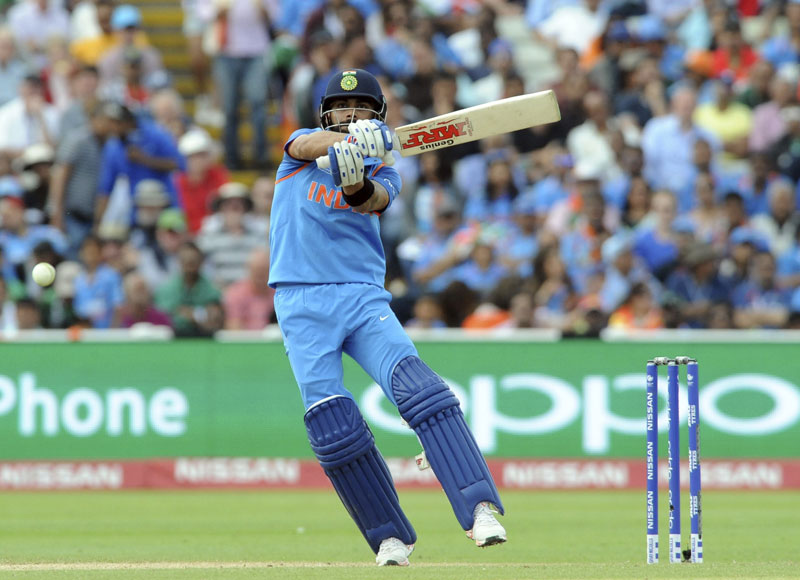 BIRMINGHAM, June 16: India coasted into a Champions Trophy final against fierce rival Pakistan by beating Bangladesh by nine wickets on Thursday, guided by an elegant century by Rohit Sharma and a surprising bowling performance by part-time spinner Kedar Jadhav.

Set a victory target of 265 by a Bangladesh team playing its first semifinal at a global tournament, India never looked in danger as Sharma hit an unbeaten 123 for his 11th ODI hundred and was accompanied at the finish by captain Virat Kohli (96 not out).

They had an unbroken 178-run partnership off 153 balls for the second wicket as Bangladesh's bowlers were smashed around Edgbaston, with Kohli passing 8,000 runs in ODIs and becoming the quickest to reach that milestone.

The defending champions reached their target with 9.5 overs remaining, setting up a final to savor at The Oval on Sunday and one that is sure to be watched by hundreds of millions of fans on TV.

India and Pakistan have only met in one ICC final — the 2007 Twenty20 showpiece, which was won by India. Pakistan has never won the Champions Trophy while India is a two-time winner.

Pakistan has bounced back from a 124-run loss to India in its opening group game — a performance Pakistan coach Mickey Arthur described his "shambolic" — to beat top-ranked South Africa, Sri Lanka and host England.

"The turnaround has been magnificent," Kohli said. "They've beaten sides that looked really strong against them, but the belief just showed on the field the way they played together as a team.

"What we are going to try to do is repeat the similar sort of cricket that we have played so far ... I don't know there's much that we need to change as a team."

Bangladesh, overwhelmed in the biggest match in its history, looked in good shape on 154-2 after being put into bat but lost Tamim Iqbal (70) and Mushfiqur Rahim (61) to Jadhav — an innocuous-looking bowler with an ungainly style. His figures of 2-22 off six overs were surprising given he is rarely used by India, having bowled just 30 overs and taken six wickets in 18 ODIs before this semifinal.

"His wickets were honestly a bonus," Kohli said. "It ended up changing the whole game for us."

Bangladesh finished on 264-7, which was always unlikely to be too short on a good pitch.

Sharma's innings was virtually chanceless, a masterclass that featured almost every stroke in the book. By the time he'd reached his fifty, off 47 balls, he had already caressed two square drives, a straight drive and a wristy shot through midwicket to the boundary. There was also a lovely lofted pull to the long-on rope.

He hooked Mustafizur Rahman for six to bring up his century and has now scored 91, 78, 12 and now 123 not out this tourmanent, which he came into off the back of an intense IPL campaign.

Sharma shared an 87-run stand with Shikhar Dhawan before the left-hander sliced Mashrafe Mortaza to point for 46, his second-lowest score in nine Champions Trophy innings that also takes in the 2013 tournament.

Kohli came to the middle and was also a joy to watch, hitting 13 fours in his 78-ball knock as Bangladesh's bowling became increasingly untidy. Mustafizur, arguably Bangladesh's top bowler, went for nearly 9 per over in finishing with 53 runs off his six overs.

Earlier, Bhuvneshwar Kumar removed Soumya Sarkar (0) in the sixth ball of Bangladesh's innings and Sabbir Rahman (19) at the end of the seventh over, before Tamim and Mushfiqur led a recovery.

The highlights of their stand included three straight fours from Tamim off spinner Ravichandran Ashwin and Mushfiqur's overhead scoop beyond wicketkeeper Mahendra Singh Dhoni for two runs to bring up the century partnership.

The match turned when Jadhav got through Tamim's attempted slog-sweep and bowled him for 154-3 after 28 overs, before his full toss was dragged by Mushfiqur straight to Kohli at midwicket for 184-5.

Paceman Jasprit Bumrah struck late to remove Mahmadullah (21) and Mosaddek Hossain (15), but Mashrafe Mortaza's 30 off 25 balls, which included five fours, gave Bangladesh something to cling to.

Thanks to Sharma and Kohli, it proved an easy chase for India.

"We could have scored 300 or 320, but once they got our two set batsman out, that was a big setback for us," Mortaza said.

"We have some experienced players now and hopefully next time we will come strongly. You have to be stronger mentally in these type of games, but otherwise we did well."