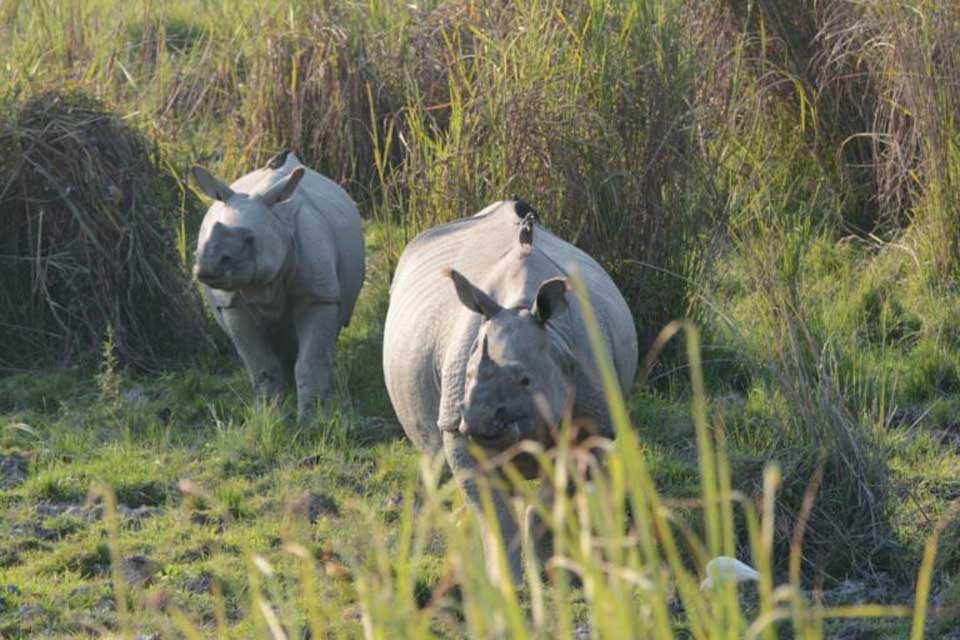 KATHMANDU, Feb 20: India and Nepal are all set to sign an agreement to cooperate on biodiversity conservation, including the transboundary conservation of species like the Indian rhino (Rhinoceros unicornis), Bengal tiger (Panthera tigris) and Asian elephant (Elephas maximus), Indian media reported on Tuesday.

The memorandum of understanding is expected to be signed before India’s upcoming parliamentary elections in April; Mongabay-India said in its news report.

“The MOU will lead to jointly agreed actions in the transboundary landscape with reciprocal commitments,” Yadav, who has worked at India’s National Tiger Conservation Authority and the Global Tiger Forum, told Mongabay India. “It will lead to better conservation of tigers, elephants and rhinos. It can also help immensely in tackling illegal trafficking due to improved information sharing.

Nakul Chettri, a senior biodiversity specialist with the International Centre for Integrated Mountain Development (ICIMOD), based in Kathmandu, Nepal, said the MOU would be a welcome step.

“It is better late than never,” Chettri told Mongabay India. “It is very much needed in terms of facilitating transboundary cooperation for conservation work. India and Nepal are already collaborating on a number of wildlife-related issues, but this will cement the bilateral cooperation and strengthen the management of important transboundary wildlife habitat. It will be a win-win for both.”

Man Bahadur Khadka, director-general of the department of national parks and wildlife conservation at Nepal’s Ministry of Forests and Environment, recounted numerous examples of close cooperation between the two nations in which wildlife that strayed across the border were sent back safely. “Nepalese and Indian authorities are already working in close coordination including sending the animals that stray to the other side. The MOU will only improve this work,” Khadka said.

“We are looking at signing the MOU soon — this month or early next month,” Khadka added. “All work regarding that is complete. The effort is to find a suitable time for officials of both countries. The idea is to do it before India’s elections are announced because otherwise it will be delayed by several months.”

He stressed that the MoU would focus on biodiversity conservation, wildlife habitat management, tiger conservation and protection.

A senior official at India’s environment ministry, who spoke on condition of anonymity, told Mongabay India that the MOU had been in the works for several months and was ready to be signed by both sides. “We hope that it is signed soon — before elections. A suitable date is being worked out,” the official said.

The elections are expected to be held in April and May.

The MOU is expected to put an emphasis on cooperation for the conservation and protection of the tiger, India’s national animal. India is home to 2,226 tigers, according to the 2014 tiger population estimation, up from 1,411 in 2006. Similarly, the latest estimates put Nepal’s tiger numbers at around 235, up from 120 in 2009. India’s latest tiger estimate is expected to be published later this year.

The cooperation of the two countries on the issue of tiger conservation is important as both have seen a steady rise in the tiger population in the last 10 to 12 years. At the same time, the tiger remains an endangered species, threatened by poaching and human-wildlife conflict. Khadka said the MOU would have a significant focus on tiger conservation.

“As per the 2018 estimate, which was done using scientific methods, our tiger population is 235,” he said. “But we are planning to cross-check with the Indian authorities about the population of tigers moving across the border to get a clear estimate.”

Yadav said tiger corridors, which allow the big cats to move between habitats, were vital for the survival of species.

“For the survival of tigers, corridor connectivity is very important and for many of the tiger reserves in northern and eastern India, that can only happen via Nepal through the Terai landscape,” he said. “So from both India’s and Nepal’s point of view, this agreement will be critical in maintaining the tiger corridor.”

“In other parts of the world, such transboundary tourism circuits have become a symbol of inter-country cooperation for cross-border socioeconomic development as well as for long-term peace and stability,” the report said.

KATHMANDU, Oct 22: A Joint Technical Committee of Joint-Secretary of Nepal and Jordan is to be formed for the implementation... Read More...