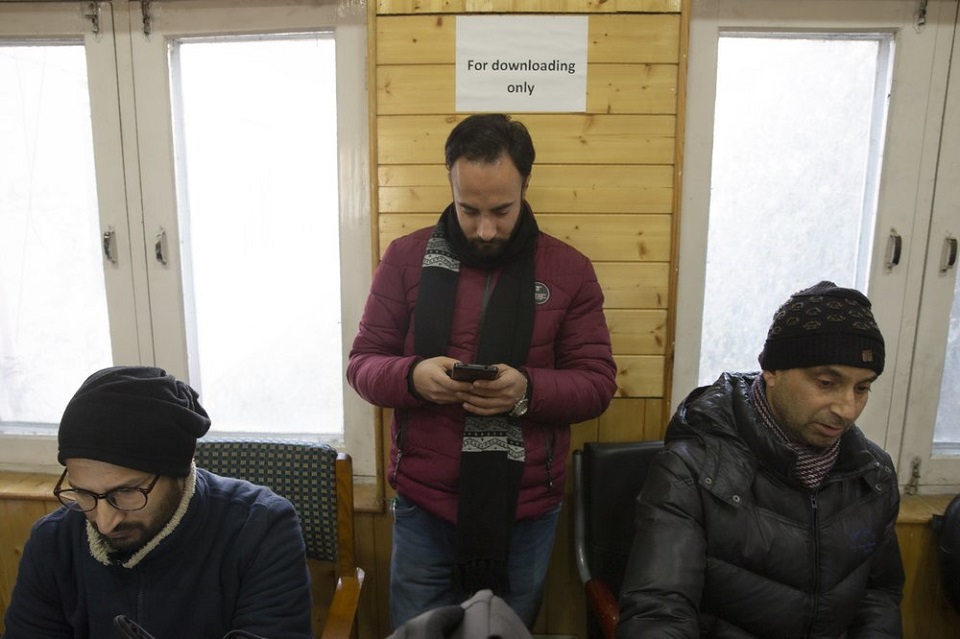 In this Jan. 30, 2020, photo, a Kashmiri journalist, center, browses the internet on his mobile phone inside the media center set up by government authorities in Srinagar, Indian controlled Kashmir. Six months after India stripped restive Kashmir of its semi-autonomy, enforcing a total communications blackout, it has restored limited internet at slow speeds with access only to government-approved websites. Since Modi came into power in 2014, the internet has been suspended more than 365 times in India, according to the global digital rights group Access Now. (AP Photo/ Dar Yasin)

NEW DELHI, Feb 14: Six months after India’s government stripped restive Kashmir of its semi-autonomy and enforced a total communications blackout, it is heralding the restoration of limited, slow-speed internet as a step toward normalcy.

But for the Himalayan region’s 7 million people, the reality is far different. They are only allowed to access government-approved websites. Popular social media platforms such as Facebook, WhatsApp and Twitter remain blocked. And while users can access YouTube and Netflix, the internet service is too slow to stream video.

Some Kashmiris are evading censors by using virtual private networks, or VPNs, which are widely employed globally to access restricted websites, but Indian authorities are looking for ways to clamp down on those, too.

“Frankly, let’s call it what it is: It’s still an internet shutdown and a blanket censorship of the internet,” said Nikhil Pahwa, a New Delhi-based digital rights activist. “Can you imagine this being done to Delhi?”

The portion of the divided Kashmir region that India controls was already one of the most militarized places in the world before the government scrapped its semi-autonomy and statehood last summer, began pouring in more troops and imposed harsh curbs on civil rights and information, including a blackout on the internet, cellphones, landlines and cable TV.

The government said it was necessary to ban the internet to head off anti-India protests by rebels who have fought for decades for independence or unification with Pakistan, which administers the other part of Muslim-majority Kashmir. Both countries claim the Himalayan region in its entirety.

“The internet clampdown in Kashmir is far worse censorship than anywhere in the world. It even surpasses China’s,” said Pranesh Prakash, an affiliated fellow at Yale Law School’s Information Society Project. “It is a step toward demolishing democracy in India.”

Since the internet ban was partially lifted on Jan. 25, some Kashmiris have shared access to banned sites through VPNs with neighbors and friends and taken to the web to denounce the government’s actions in the region.

“They made us silent for six months. Now they’ve opened a window,” said Shoaib Rassol, a student. “We’ll tell the world what India has done to us.”

Internet shutdowns are a favored tactic for the government of Hindu nationalist Prime Minister Narendra Modi. During protests in New Delhi against a citizenship law passed late last year that fast-tracks naturalization for immigrants of all South Asia’s major religions except Islam, internet and cell service were frequently disrupted.

Since Modi came into power in 2014, the internet has been suspended more than 365 times in India, according to the global digital rights group Access Now.

In January, government official Shaleen Kabra said terror groups operating in the region and anti-national elements were using the internet to “propagate terrorism” and spread rumors to “cause disaffection and discontent.”

Recently, internet service was suspended in areas of New Delhi, in the eastern state of West Bengal, the northern city of Aligarh and the entire state of Assam during protests after the contentious citizenship law was passed in Parliament.

In Kashmir, internet bans have been more frequent. More than a third of India’s internet bans of the last six years have imposed there, some lasting months.

In 2017, Indian authorities blocked 22 social media sites, including Facebook and Twitter, and cut 3G and 4G mobile data services for one month in the region in an effort to calm tensions after protests fueled by videos depicting the alleged abuse of Kashmiris by Indian forces.

United Nations experts at the time said the ban had “the character of collective punishment.”

On Wednesday, four U.S. senators wrote to U.S. Secretary of State Mike Pompeo, expressing concern about the curbs on the internet in Kashmir and calling for its full restoration. President Donald Trump is to visit India later this month.

For Kashmiris, the internet shutdowns are more than an inconvenience. They have a grave human cost.

A successful telemedicine consultancy operated by a group of Kashmiri doctors who shared thousands of patients’ medical reports with a pool of doctors in the U.S. and Europe for their opinions on treatment had to close down.

The internet lockdown also hurt Kashmir’s economy as tens of thousands of artisans became jobless when their handicrafts couldn’t be sold online. Local tech companies had to close or relocate to other areas of India, suffering heavy losses.

“We’ve little expertise to keep track of countless applications added to the digital world every day,” said the official, who spoke on condition of anonymity because he was not authorized to talk to media. He said authorities have privately said they won’t restore regular internet broadband service until VPNs can be blocked. Officials at the region’s police, home and telecommunications departments said they wouldn’t comment.

In a government order on Jan. 31, Kabra said authorities reviewing internet activity after the blackout was partially lifted found VPNs were being used “for coordination of terror acts, transmission of rumors and targeted messages to spread ideologies inimical to the interest of the state.”

Analysts say the clampdown could spearhead a new level of government control over information allowing it to crack down on freedoms in Kashmir and elsewhere in India.

“Given that this is a norm that has been established: that it is legal for the state to ask internet service providers to start filtering out most of the internet, nothing stops the government of India from doing something similar. There’s no accountability, no transparency,” said Pahwa, the digital rights activist.

Only 70 samples tested on an average per day after lockdown

KATHMANDU, April 5: Although the World Health Organization has been urging the countries across the globe to 'test, test, test'... Read More...

Govt yet to trace all passengers on board three aircraft

KATHMANDU, April 1: Although the government has claimed that it has been able to track down more than 80 percent... Read More...

POKHARA, March 26: A total of 145 foreign and Nepali trekkers stranded in Mustang district have been rescued and sent... Read More...

An open letter to Ram Narayan Bidari
21 hours ago

Are we falling prey to the tech world?
20 hours ago

Trading via Tatopani and Rasuwagadhi still closed despite government assurance: Importers
18 hours ago