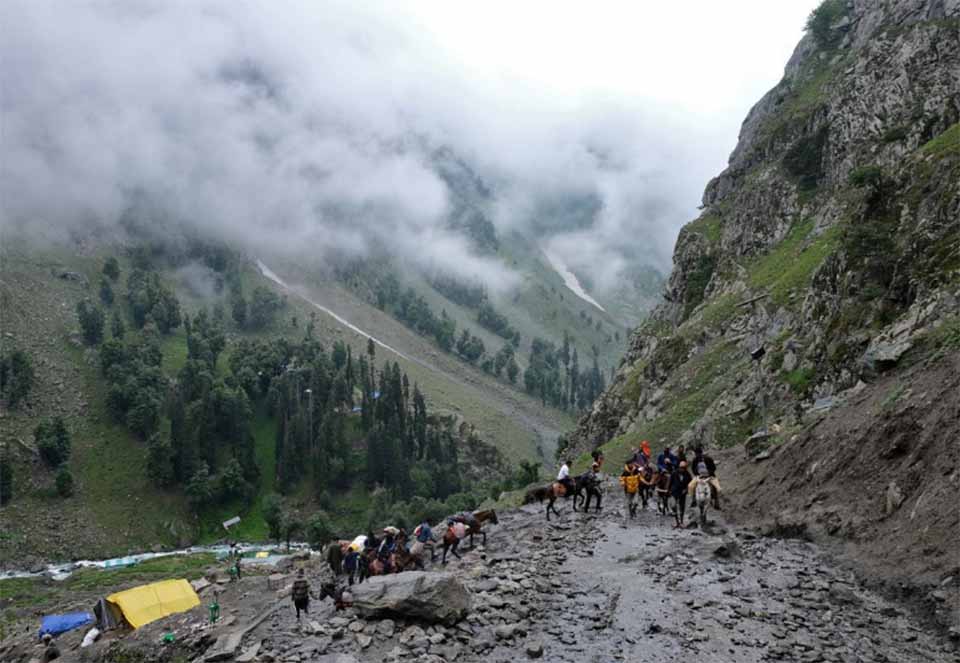 Hindu pilgrims trek through mountains to reach the holy Amarnath cave shrine, where they worship an ice stalagmite that Hindus believe to be the symbol of Lord Shiva, near Pahalgam in the Kashmir region, July 27, 2019. REUTERS/Alasdair Pal

PAHALGAM, July 28: India is hailing a Hindu pilgrimage to a holy cave high in the snow-capped mountains of contested Kashmir as an example of communal harmony, in a region where the Muslim-majority population is overwhelmingly hostile to its rule.

India and arch-rival Pakistan have fought two wars over Kashmir, and came close to a third in February after a suicide-bomb attack by Pakistan-based militants on Indian paramilitary police near the pilgrimage route.

For the Amarnath Yatra pilgrimage in the Pahalgam area, the Jammu and Kashmir state government has spent a record $72 million on preparations for the six-week event that began on July 1.

“It is a perfect example of religious harmony,” said Anup Kumar Soni, additional chief executive of the Amarnath Ji Shrine Board, which organizes the pilgrimage.

Amarnath Cave, covered by snow almost all year round, contains an ice stalagmite that is considered a physical manifestation of Lord Shiva, a Hindu god.

Saffron-clad Hindu ascetics, some barefoot and with photos of the cave around their necks, trudge the 46 km (28 mile) route to the cave across glaciers and waterlogged trails.

Muslim Kashmiri villagers in long woolen coats clear the way of snow and ice, and thousands of Indian troops are deployed to guard against attacks by Muslim militant groups.

The route is arduous. One in four of the 300,000 pilgrims who have visited this year have required medical treatment, and 24 have died, mainly from heart attacks and hypertension, according to government statistics.

While thousands of Kashmiris work to clear the path, thousands more rent ponies and palanquins to the pilgrims, and tents for them to sleep in.

“Everyone is always friendly, there is no hostility here,” said a Hindu pilgrim who give his name as Abhhinav, hiking up a steep track in driving rain to one of the passes on the route that reaches nearly 4,500 meters (15,000 feet) in places.

The pilgrimage has been attacked repeatedly by militant groups - the last time in 2017 when eight pilgrims were killed in an ambush.

This year, the government has set up a bar-coding system, allowing only registered people onto the trail.

Separatists in Muslim-majority Kashmir have been campaigning against the government of Hindu-majority India for years, including a campaign of violence by militants, and an Indian security force response that Kashmiris often condemn as heavy handed.

“There is no private sector here, and so educated youth and many other Kashmiris are depending on the Yatra,” said Firoz Ahmed Wani, a history graduate and part-time tutor renting out two tents to pilgrims paying 200 rupees ($2.90) a night, at a camp along the route.

“We’re ordinary people. The conflict is something for the politicians to decide.”

Violence against women sees spike in Suklaphanta Municipality
39 minutes ago