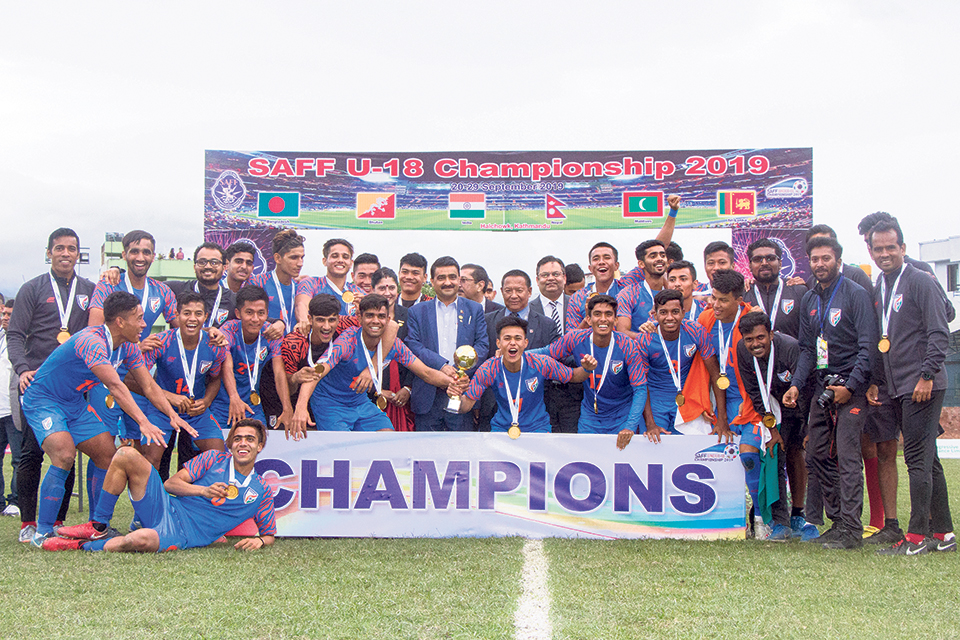 Members of India U-18 football team pose for a group photo with the trophy as they celebrate after defeating Bangladesh in the final of the SAFF U-18 Championship at the Halchowk Stadium in Kathmandu on Sunday. Photo Courtesy: ANFA

KATHMANDU, Sept 30: Goal celebration cost Bangladesh the title of SAFF U-18 Championship, as it gave away the final game to India after being limited to nine players when the scorer was shown a second yellow card of the game.

Bangladesh lost the game 2-1 at the hands of India in Kathmandu on Sunday.

In the final match at the Armed Police Force (APF) Club’s Halchowk Stadium, Bangladesh, who lost on head to head with Nepal in the 2017 edition, suffered yet another loss this time.

India was the runner-up of the first edition losing 5-4 on penalties after a 1-1 regulation time draw against Nepal in 2015.

With the third edition win, India has become the first team to win the title after Nepal.

In a competitive final, Bikram Pratap Singh gave India the early lead in the second minute, while Bangladesh got a goal back in the 38th minute through Yeasin Arafat. India won the game after scoring a first injury-time minute goal with Ravi Bahadur Rana scoring for the team.

The game became very competitive as three players were shown red cards. The referee Kabin Byanjankar showed red cards to India’s Gurkirat Singh and Bangladesh’s Mohammed Ridoy in the 22nd minute as the players were embroiled in a brawl.

But, Bangladesh came back on level terms with a 39th-minute goal from Arafat, but he was shown the second yellow card after he took off his jersey while celebrating the goal. The loss proved costly for Bangladesh as it went on to lose the match in the injury time.

India took a while though, to get its winner with a stern Bangladesh side refusing to give away the game. The Bangladesh resistance was broken when Rana stunned the team with a goal.

Likewise, in the third-place match earlier on the day at the All Nepal Football Association (ANFA) Complex, the Maldives defeated Bhutan 1-0 with Ibrahim Imran scoring a 75th-minute winner to guarantee the third place.