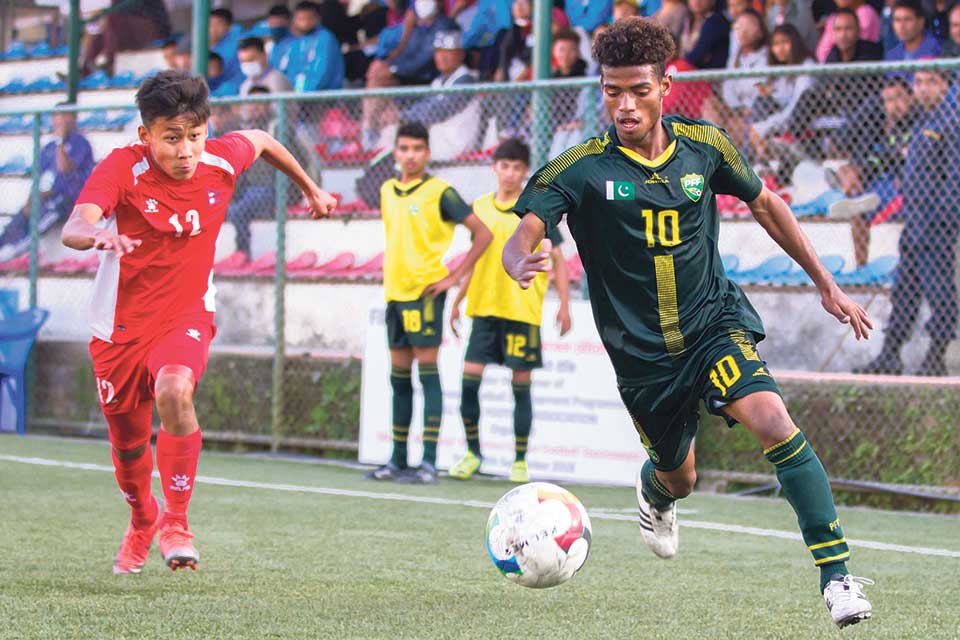 Nepal’s Pramesh Gurung and Pakistan’s Mudassar Nazar in action during a SAFF U-15 Men’s Championship semifinal football match at the ANFA Complex in Satdobato, Lalitpur on Thursday. Photo Courtesy: ANFA

KATHMANDU, Nov 2: The defending champion India and the runner-up of the last edition Nepal have both lost in their semifinal clashes in the ongoing SAFF U-15 Men’s Championship in Lalitpur on Thursday.

At the All Nepal Football Association (ANFA) Complex in Satdobato, Bangladesh defeated the defending champion India 4-2 on tiebreaker, while Nepal was thrashed 4-0 by Pakistan, who had not participated in the last two editions prior to this.

Nepal held Pakistan to a goalless draw in the first half, but conceded four goals in the second half.
Pakistan got a gift of a goal from Nepal for its first in the 54th minute, while it scored its two other goals in penalties and one through a header.

Pakistan scored its first goal of the game as defender Jaan Limbu put the ball into his own net trying to defend it despite Nepal presenting a comparatively good performance in the first period. The goal proved out to be the turning point and Pakistan went on to score its second just six minutes after that from the spot.

Mohib Ullah converted the first penalty for Pakistan. The referee had awarded Pakistan the spot kick after Pakistan’s Osama had carried the ball forward after a mismatched defensive performance from Nepal, and Limbu fouled him inside the box. Limbu was showed red card, and 10-man Nepal just could not cope with the Pakistani attack line.

Pakistan got another spot kick nine minutes after that as Nepal’s Niwas Phuyal fouled Pakistan’s Mudassar Nazar inside the box. Ullah scored his brace from the spot to make it 3-0.

Pakistan then added its fourth goal in the 77th minute as Moin Ahmed headed the ball in from a cross near the corner.

Pakistan will now take on Bangladesh on Saturday for the title.

In the other match of the day, India suffered a loss against Bangladesh failing to protect its 17th minute lead in the latter part of the game. Bangladesh had scored the equalizer in the injury time to pull the game back in track.

Nepal head coach Sanoj Shrestha complained about the lack of combination between the midfield and the attack line for the loss.

“Nepal could not withstand the pressure after scoring an own goal and conceding a penalty. The Pakistani team looked stronger physically as well,’’ Shrestha said. “The combination between the striker and the midfield was not good for us. We had made a tactics of playing the short passing game rather than the long one and this worked well in the first half. But, it could not be implemented in the second half,’’ Shrestha added.

Pakistan head coach Roberto Portella said that the game against the host team was really hard.
“It was very difficult to play for us as Nepal had kept us under pressure in the first half,’’ Portella said, adding, “Our players played really well. Specially, the defense line gave no chances to Nepal’s attack. After leading the game by a goal, it was comparatively easier for us.’’

Nepal will now play against India in the third-placed playoff earlier on the same day of the final.

Newly-appointed ministers to be sworn in today
15 hours ago

Nepse loses 23.85 points on Monday as investors rushed to book profits
9 hours ago