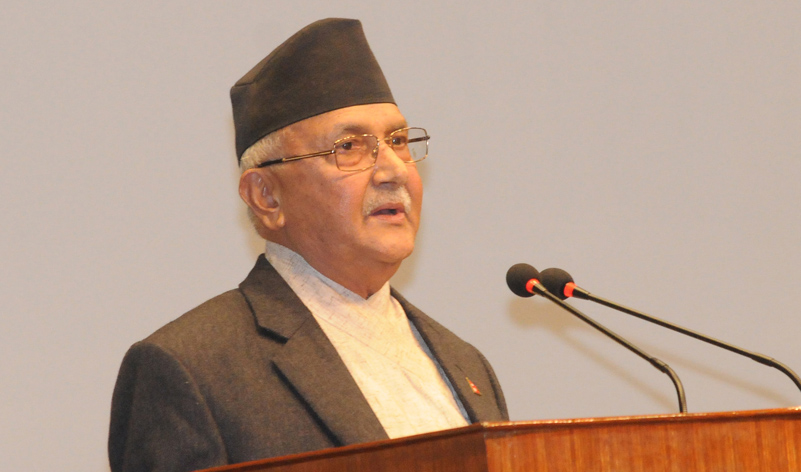 KATHMANDU, June 29: Prime Minister KP Sharma Oli has asserted that the incumbent government cannot afford to be a failure in any sector and is not willing to fail either.

PM Oli made the remark while responding to the queries raised by the lawmakers in today's meeting of the House of Representatives (HoR) that dwelt on the issues relating to the Office of the Prime Minister and Council of Ministers (OPMC), National Planning Commission Secretariat, Office of the President and Office of the Vice-President under the Appropriation Bill-2075.

Referring to the National Investigation Department and other agencies bringing under the OPMC in a bid to run the incumbent government in a new manner, Oli said that efforts were made to grant more authority to the governmental agencies so as to render services to the public to the optimum.

According to him, the move is aimed at institutionalizing the rights of the citizen enshrined in the new constitution.

The PM was of the view that since the country was willing to move ahead in a new manner and state structure were moving in a new way, it was natural for some people not understanding this fact.

The PM further said that an emphasis had been laid on expediting the post-earthquake reconstruction works and a Nepal-India joint government team had been mobilized in the Terai region to find ways for the control of the problem of flooding there. Talking about the progress of so far in the post-quake reconstruction of historic and cultural monuments, the Prime Minister said, "The renovation of historic Gaddi Baithak has been completed, the restoration of Dharahara ( Bhimsen pillar) is about to commence and reconstructions of other important historic heritages are going on."

All laws demanded by constitution by coming September 19

The Prime Minister informed the parliament that all laws required for the enforcement of the constitution would be brought by coming September 19. As he said, under the fundamental rights, 73 laws have been already enacted while 37 are under the process of formulation.

He took the time to express his belief for the occurrence of significant change in the country within the next few years, adding that sliding domestic share market would see a rise after sometimes. There was no doubt that rails would be seen in the country in the future.

PM Oli said any form of violence against women was not acceptable and thus would not be tolerated. "Violence against women is protested. Women's dignity will be guaranteed. Perpetrators in VAW incidents will be booked," he said. "The tendency of protesting at public places like hospital is bad. It is wrong to trouble others for one's sake. All should abide by the Law. So does the government." RSS