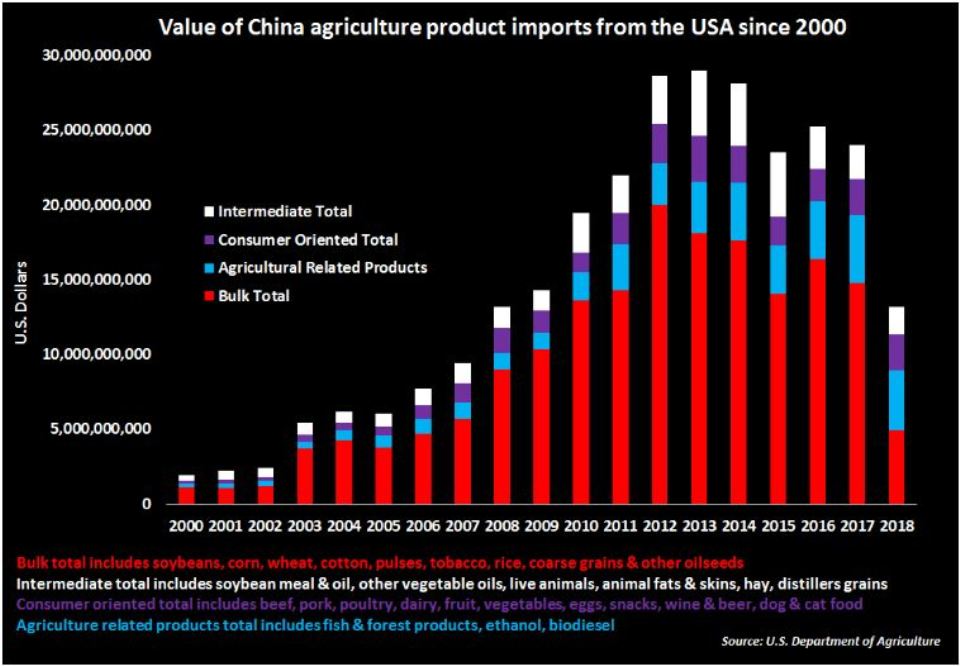 WASHINGTON/BEIJING, Oct 30: U.S. President Donald Trump’s demand that Beijing commit to big purchases of American farm products has become a major sticking point in talks to end the Sino-U.S. trade war, according to several people briefed on the negotiations.

Trump has said publicly that China could buy as much as $50 billion of U.S. farm products, more than double the annual amount it did the year before the trade war started.

U.S. officials continue to push for that in talks, while Beijing is balking at committing to a large figure and a specific time frame. Chinese buyers would like the discretion to buy based on market conditions.

“China does not want to buy a lot of products that people here don’t need or to buy something at a time when it is not in demand,” an official from a Chinese state-owned company explained.

If U.S. agricultural products “enter China in a concentrated way, it might be hard for the domestic market to digest,” the Chinese official added.

Oversupply of agricultural products in China would hit local prices really hard, he said, “and break the supply-demand balance.”

Moreover, a massive outbreak of African swine fever has decimated the pig herd in China, battering demand for soybeans, a key feed ingredient and the biggest agricultural import from the United States.

Chinese agricultural buyers, representing a mix of state and private enterprise, typically import from the cheapest source. The U.S. demand that China commit to buying a huge volume of products, regardless of whether they were economical or in demand, would require state intervention to be implemented.

That contradicts a core demand the United States is making of China in the current trade war, and a U.S. policy goal for decades: that China become a more market-based economy and stop subsidizing state companies and favoring local firms at the expense of foreign competitors.

The upside-down nature of the situation is striking, some trade experts say.

“The U.S. government doesn’t normally regulate the pricing or timing of ag exports — a private sector role — but in this case the president has already taken this step,” said Miriam Sapiro, former acting U.S. Trade Representative under Barack Obama and advisor to President Bill Clinton, now a senior vice president at Sard Verbinnen.

“It is ironic that China is pushing back, saying ‘We want the market to address this,’” said Nicole Lamb-Hale, a former assistant secretary of Commerce and a managing director at Kroll, a risk management firm.

The hefty agricultural purchases Trump is asking for are market distortive, Lamb-Hale said. China is telling Trump they are “just not feasible.”

Asked specifically about concerns that the administration’s push for big agricultural buys contradict the longer-standing U.S. free trade message, a White House spokesman said: “The president has been clear that he wants real structural changes that yield actual, verifiable, and enforceable results, leading to fairer trade, more efficient markets, and increased prosperity for both countries.”

Commerce ministry spokesman Gao Feng told reporters on Oct. 17 that China would “increase U.S. farm purchases based on domestic demand and market principles, while the U.S. would provide favorable conditions.”

A U.S. administration official said Tuesday that the two sides might not agree to a “Phase One” deal by the Asia Pacific Economic Cooperation meeting in Chile in mid-November.

In recent weeks, China has purchased large amounts of soybeans from Brazil, after prices of U.S. soybeans jumped as investors bet on big China buys.

China to ask U.S. to remove tariffs in exchange for ag buys in talks Friday: sources

BEIJING, Aug 20: China and the United States have agreed to hold trade talks “in the coming days” to evaluate... Read More...

TEL AVIV – Nobody should be surprised that US President Donald Trump’s Middle East peace proposal is heavily tilted toward... Read More...