As the trade war continues 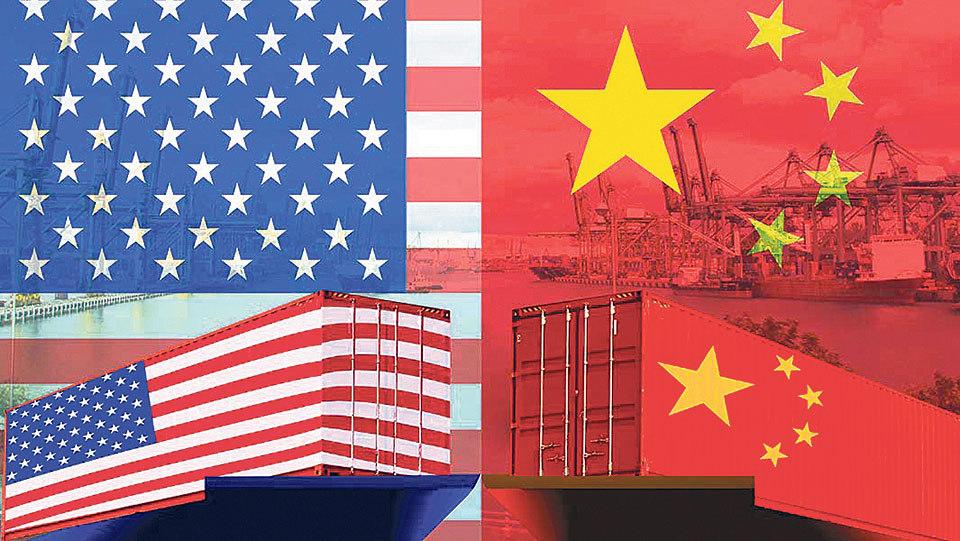 Petrol, gold and other luxurious items have become dearer due to trade war between China and the US. It will have a bad impact in our purchasing power

In its recent economic and fiscal outlook, International Monetary Fund (IMF) warned that the two greatest potential dangers to global growth in 2019 were a no-deal Brexit and an escalation of trade war between the US and China. The first looks unlikely but the second has brought the whole world into a course of dilemma about the world economy.

Until now, the world thought that there is no backing from globalization and liberalization. But ongoing trade tussles and tariff attacks between the US and China have raised the question on future of globalization and relevance of protectionism. It has been claimed that public support for free trade is shrinking and the long-standing political consensus that trade liberalization is beneficial is under attack. The US has shifted to protectionism by imposing tariffs and continuously threatening its largest trading partners, the EU and China. Brexit, too, is partly driven by a protectionist attitude. Although the UK intends to enter into Free Trade Agreements (FTAs) with other countries, the move away from the single market is itself a rejection of free trade within the EU.

Throughout history wars and economic depressions have led to increase in protectionism, while peace and prosperity have tended to encourage free trade and globalization. The European monarchies favored protectionist policies in the 17th and 18th centuries in an attempt to increase trade and build their domestic economies at the expense of other nations.

During the 18th and 19th centuries, Europe benefited enormously from protectionism. The most popular methods of protectionism include quotas and tariffs on imports. Tax cuts or subsidies for domestic companies are also protectionist measures. Free trade policies were more successful in promoting GDP growth than protectionism during the 20th century.

Trump’s trade war began in January 2018, when he ordered tariffs on solar panels and washing machines, followed by duties on steel and aluminum with exemptions for some countries. Then came the March in 2018 when President Trump announced tariffs on all imports of steel and aluminum, including metals from China and imposition of 25 percent  tariffs on $50 billion worth of Chinese goods accusing China of unfair trading practices and intellectual property theft.  Since then, the two countries stand affront in a hard and non-ending debate pointing fingers to each other as threatening the world order and free trade. In China, there is a perception that the US is trying to curb its rise as a global economic power. So far, the US has slapped tariffs on US$550 billion worth of Chinese products. China, in turn, has set tariffs on US$185 billion worth of US goods. Both sides have also threatened qualitative measures that could affect US businesses operating in China. It is to be noted that the two countries share $660 billion in trade between them, according to the US Census Bureau.

Negotiations are ongoing but settlement seems remote. With neither Trump nor China’s President Xi Jinping willing to back down, it seems the trade war is way far from its conclusion.

The competition between China and the US has been going on for years. It did not begin with Trump. It has come to the front because China’s gross domestic product shot up from only 20 percent of the US GDP in 2000 to about two-thirds in 2018, and may catch up sometime in the 2030s if current trends continue.   Moreover, one of the grievances that the US has is it has not benefited enough from China-US economic relations. China has been able to lift 600 million of its citizens out of poverty, initially through the vast expansion of export-oriented jobs. American consumers have also benefited from two decades of low prices but not as much as China.

Ripple effects
The prolonged trade war is going to have long-lasting consequences for the world economy. The Financial Times claims that the global trade contracted in the first seven months in 2019 as political uncertainties intensified and the US-China trade war became more disruptive. In the first seven months, the US, Japan, Central and Eastern Europe as well as the Middle East and North Africa all reported an annual contraction in exports. The Euro Zone reported no growth.

This puts enormous achievements of the last decades at severe risk. In the short run, tariffs are supposed to give a competitive advantage to domestic producers lowering their product prices by comparison. As a result, they would receive more orders growing their business and adding more jobs. China does have some advantages too. One is the structure of its economy dominated by state enterprises. The majority of banks in China are also state-owned, making it easy for the government to generate a surge of cheap credit—and the subsequent investment that boosts growth. The second advantage is the structure of China’s political system. China could also further cheapen the value of its currency to offset US tariffs. Theoretically, China can stimulate a flagging economy by ordering a burst of investment that boosts gross domestic product growth in the short term. But this would probably generate more bad loans in an already fragile banking system.

On the other hand, some analysts say that the United States is in a good position to make up for the misguided policies of the past, which resulted in millions of lost jobs and thousands of shuttered factories. As an immediate result, the stock market and the currency value have increased in the US while the unemployment rate has gone all time low. The US goods deficit with China has shrunk 11 percent for January-July 2019 versus the same period in 2018. This means the US is on track to experience its smallest goods trade balance with China since 2012. However, global growth in trade is lagging behind general economic growth for the first time in decades.

The United Nations Conference on Trade and Development (UNCTAD) released a study, Trade and trade diversion effects of United States tariffs on China according to which, the biggest fallout of the trade war has been the trade-diversion effect—trade being diverted to other countries to fill the vacuum left by the absence of Chinese exports to the American market. In the medium run, it is sure that both the countries as well as the whole world will suffer. The trade war between China and the United States could cost an increasingly fractured global economy about US$700 billion, or 0.8 percent of gross domestic product, by 2020, according to Kristalina Georgieva, International Monetary Fund chief.

More than two-thirds of the consumer goods the United States imports from China now face higher taxes. The US administration had largely avoided hitting consumer items in its earlier rounds of tariff hikes. But with prices of many retail goods now likely to rise, the Trump administration’s move threatens the US economy’s main driver: consumer spending.

Impact on Nepal
The trade war between the two largest economies of the world could have an adverse impact on the exports of the developing and also the least developed countries (LDCs) like Nepal.

Nepal has been granted tariff-free, quota-free facility to export to the United States under the Generalized System of Preference facility. Similarly, China has granted duty-free, quota-free facility to 8,030 products for LDCs like Nepal. As China and the US are in the loggerheads to raise tariff and discourage imports from each other, Nepal, having a weak export base and being granted duty-free quota-free access to various exports, is still to feel the brunt of this war.

However, as the US dollar rises in value, our imports have skyrocketed and the rise in value of remittance due to rise in the USD can’t be considered sustainable.

Petrol, gold and other luxurious items have been dearer due to this war and it will have a bad impact in our purchasing power. As many other nations have been able to exploit this trade war as the US and China look other areas to balance their international business and economy, Nepal can strengthen internally and promote comparatively advantageous products to these country as much as possible, though the volume will remain negligible for these giants. Nepal has high trade concentration with India and the United States and China both have not increased duty on imports from India.

Nepal’s trade dependence with India is rising as 66 percent of total imports and 57 percent of exports take place with India. So, Nepal can only hope to end this war soon as the global economic slowdown will surely have impact on Nepal and other poor countries in the long run.

The author is a section officer with Ministry of Foreign Affairs. Views are personal

Brexit and the Future of Europe

Brexit will open the floodgates for other anti-European forces within the Union. Indeed, no sooner was the referendum’s outcome announced... Read More...

People above 50 years to get COVID-19 vaccines for four more days in KMC
22 hours ago
More than half of bottled drinking water is unfit for consumption: Govt report
6 hours ago