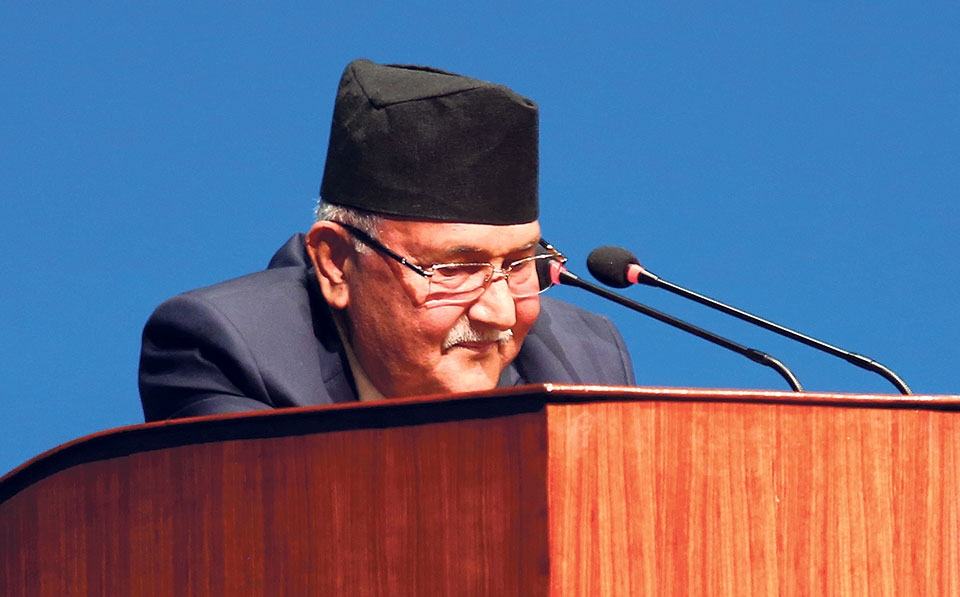 KATHMANDU, June 19: In a tug-o-war between the main opposition Nepali Congress (NC) and the government over credit for withdrawal of the controversial Guthi Bill, parliament’s meeting on Tuesday couldn’t proceed.

As the opposition tried to take credit for compelling the government to withdraw the bill, NC lawmakers obstructed parliamentary proceedings, demanding that NC President Sher Bahadur Dueba be allowed to speak in the House prior to Prime Minister KP Oli.

The prime minister had to wait at the rostrum for around eight minutes and turn back without speaking. Opposition lawmakers encircled the rostrum and kept on chanting slogans demanding that Deuba be allowed to speak before the prime minister. Speaker Krishna Bahadur Mahara then adjourned the meeting to Wednesday.

Informed about the government’s plan to announce the bill withdrawal during the prime minister’s address in parliament, the opposition which has been demanding the withdrawal sought time for Deuba to make his address.

“It was more a political issue between ruling and opposition parties than a technical point of who spoke first,” said a senior NCP leader. “They wanted to speak first and take the credit for the withdrawal of the controversial bill.”

Following the NC obstruction, neither Oli nor Deuba was able to address the House. Prime Minister Oli then convened a press meet at his office and accused the opposition of un-parliamentary conduct.

NC lawmakers chanted slogans accusing the House speaker of siding with the ruling party and failing to maintain parliamentary decorum. “It would have been quite practical to plan the prime minister’s address after the opposition leader spoke for the agitations across the country against various bills,” reads a statement issued by the NC after the House obstruction.

According to interlocutors, NC Chief Whip Balkrishna Khand and Whip Pushpa Bhusal spoke with Speaker Mahara on Tuesday morning to demand that Deuba be allowed to address the House at the beginning. “Speaker Mahara had suggested to the NC leaders to plan Deuba’s address for Wednesday, citing the prime minister’s address already being slated for Tuesday,” said an NCP leader.

NC leaders had insisted on the main opposition leader being allowed to speak prior to the prime minister as Oli’s address would be a response to their concerns expressed in the House, but Mahara didn’t agree.

“It was clear the NC was out to obstruct the House after both sides stuck to their demands during informal negotiations prior to the meeting,” said an official at the speaker’s secretariat.