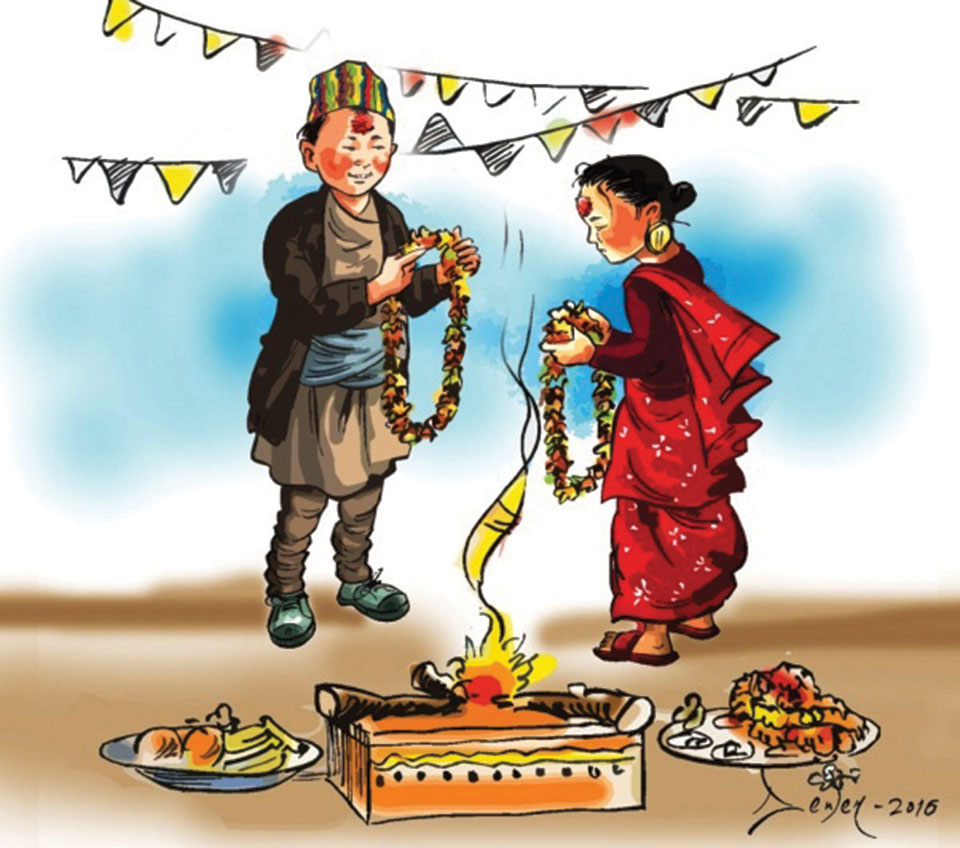 DHANGADHI, May 19: Sabitri Ghimire is 21 years old and she already has three kids. A resident of Ghiya village of Tikapur Municipality – 3, she married a man who was a year elder than her when she was 16. “I was studying in ninth standard. I fell in love with a man from a neighboring village, and subsequently we got married,” she recaps.

Ghimire and her to-be-husband would ‘date on Facebook’. They would chat on messenger for hours. “Even till late night, we would keep chatting. It felt like days were shorter, and nights are shorter. It would never be enough for us no matter how much we would talk,” she said.

Excess engagement on Facebook affected her studies. She would have a lesser interest in other works. “Due to this, my studies were badly affected. And I would have a hard time answering question paper during examinations at the school.”

The couple could not handle it well. And soon after decided to tie the knot. This brought Ghimire’s education to an end. “We decided to get married. Maybe it was too early to do that, but we could not think of another way around,” Ghimire explains.

The next year of marriage, she delivered a baby. Just in a gap of one and a half year, another baby was on the way. Yet again, she conceived. In only four years, the couple became parents of three children.

“Life changed drastically. It is challenging to look after children, to provide for them,” Ghimire laments. “Even he is not here to help me at home.”

Ghimire’s husband has left for India recently. After financial woes started striking the family, he had no other way than to make the hard choice. According to Ghimire, it was not his choice but a compulsion to go abroad.

“What else can we do. As he has to earn to feed our large family, he thought he could earn better in India and left home for it.”

In another case, a 15-year-old girl and 14-year-old boy in Narayanpur town of Tikapur Municipality – 6 were ‘nearly’ married recently. The couple had also grown intimate on social media sites. They connected on facebook and instagram and came close to each other while chatting on it. The couple stated that they reached to a point where living without each other became difficult. They shared the matter with their respective families only to get married a few days later.

However, this did not last long. Child Welfare Council (CWC) of Tikapur intervened. After counselling parents and the children, they were sent back to their respective families. They were suggested to tie the nuptial knot again, only after reaching the legal age to marry.

“We told them that they would regret in future if they start living like husband and wife from now. We also counselled their parents. They agreed, and we were able to stop them from formalising the marriage,” said Tara Thapa, coordinator of the CWC, Tikapur. “Early marriage is a curse,” he added.

Thapa himself is a victim of child marriage. He was a school going boy when he got married. After marriage, life became hell for him; he shared.

“Children might feel left out if they are not provided with mobile phones or access to social sites. But if they are provided with such facilities, there is a danger of developing a romantic relationship online. And when such relationships are developed untimely, life gets ruined,” he said. He added that almost everyone in villages and towns uses mobile these days and have access to internet service.

“The problem is not just the use of technology. The society is yet to get mature. It does not tolerate open friendship between a girl and a boy. And in search of a haven for their bonding, they decide to get married rather,” Thapa explained.

Dhana BK, 16, agrees. She is a mother of two already. While child marriage was a social culture in the past, it is happening due to social networking sites these days, said BK, who had also married her facebook friend.

According to woman right activist Kamala KC, the lack of sex education is a huge problem. “It is essential to talk openly with children about sex and educate them. This alone prevents unwanted situations in their life,” she said.

Also, according to DSP Shiva Bahadur Singh of Area Police Office, Tikapur, the growing use of social networking sites is creating an unsafe environment for children. “Things are not in control of parents anymore. There is a serious need to address this issue,” he noted. He added that unmonitored use of mobiles and the internet has forced youths even to commit suicide.

Among those who come for a pregnancy test at the Tikapur Municipality in the current fiscal year, 15 per cent of girls were below 20 years of age. “Mother and child health is not guaranteed when the mother is too young. Early motherhood is a big problem here,” said Balbahadur Rawal, Chief of Tikapur Health Unit.

Infographics: Where Do People Spend More Time on Social Media