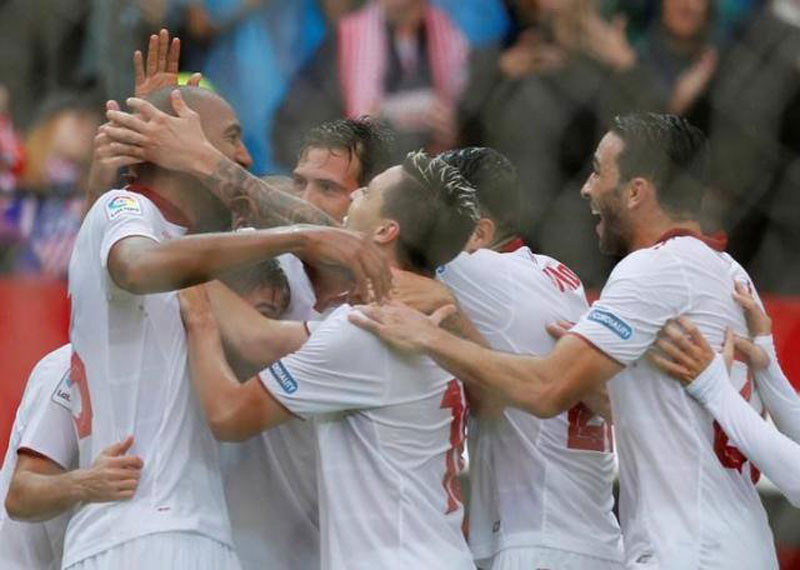 MADRID, Oct 24: Coach Jorge Sampaoli felt Sevilla needed a big win against a top opponent to establish itself as a true contender in Spain.

He got just that on Sunday as his team defeated previously unbeaten Atletico Madrid 1-0 to stay near the top of the Spanish league.

French midfielder Steven N'Zonzi netted the winner in the 73rd minute at a packed Ramon Sanchez-Pizjuan Stadium to give the hosts their third straight win.

"It was an important game to consolidate ourselves against a team that looked unbeatable," Sampaoli said. "We did well against one of the best teams in the world. This victory makes me proud."

Sevilla, which has won six straight at home, reached 20 points from nine rounds, one point behind Real Madrid, which is top after a 2-1 home win against Athletic Bilbao.

Barcelona, which defeated Valencia 3-2 Saturday thanks to an injury-time penalty kick converted by Lionel Messi, is third with 19 points.

"It's going to be tight like this the entire season," Real Madrid coach Zinedine Zidane said.

There had been some early doubts about Sampaoli as Sevilla lost in the Spanish Super Cup to Barcelona and the UEFA Super Cup to Real Madrid. But after the up-and-down start, the Argentine coach has finally been able to put Sevilla on track. As well as contending in Spain, the Andalusian club is also in a good position to advance to the knockout stages of the Champions League.

Atletico, which had the lead coming into the weekend, dropped to fifth place, three points behind Madrid.

Diego Simeone's team played with 10 men from the 77th on Sunday because of a second yellow card shown to midfielder Jorge "Koke" Resurreccion.

Sampaoli made key adjustments at halftime, allowing his team to take control of the game and earn the hard-fought victory under pouring rain in Seville.

N'Zonzi scored the winner on a fast breakaway, speeding past two defenders after receiving a great throughball from striker Luciano Vietto. The Frenchman entered the area and calmly sent a low shot into the far corner as Atletico goalkeeper Jan Oblak charged from the net.

Karim Benzema put Madrid ahead just seven minutes into the game at the Santiago Bernabeu, but Sabin Merino equalized in the 27th and held on for most of the match.

Morata, celebrating his 24th birthday, scored from close range less than 10 minutes after replacing Benzema. Athletic goalkeeper Gorka Iraizoz made the initial save but Morata persisted and found the open net off the rebound.

It was Madrid's second straight win after three consecutive draws in the league.

Madrid and Villarreal are the only unbeaten clubs in the league after nine rounds.

Athletic is sixth on 15 points, six behind Madrid.

French striker Cedric Bakambu scored the winner in second-half injury time for Villarreal, but it was Las Palmas' Kevin-Prince Boateng who attracted all the attention with a remarkable goal before halftime.

Boateng's side volley from inside the area came after a mid-air, back-heel pass by Pedro Tana, who flicked the ball across the area for Boateng to shoot firmly into the corner.

Still unbeaten in the league this season, Villarreal has won three of its last four games and is in fourth place with 19 points.

Celta Vigo rebounded from two consecutive losses with a comfortable home win over Deportivo La Coruna behind a pair of goals by striker Iago Aspas.

After a 4-3 loss to Barcelona and a 5-0 defeat against Villarreal, Celta cruised to victory against struggling Deportivo to move to eighth place with 13 points.

The teams were tied 1-1 when Aspas converted a 60th-minute penalty kick. Chilean midfielder Fabian Orellana added to the lead in the 78th and Aspas closed the scoring in the 83rd at the Balaidos Stadium.

Deportivo, which has lost four of its last five games, dropped to 17th in the 20-team standings.

Iniesta returns as Spain seeks to avenge loss to Italy

MADRID, Sept 30: Andres Iniesta will lead Spain in its World Cup qualifying matches against Italy and Albania after returning from... Read More...

Shaunae Miller looked more like a Major League Baseball player trying to avoid a tag at home than an Olympic... Read More...

Sickle Cell anemia rampant among Tharus in Western Terai, 11% of the indigenous community have the disease
29 minutes ago