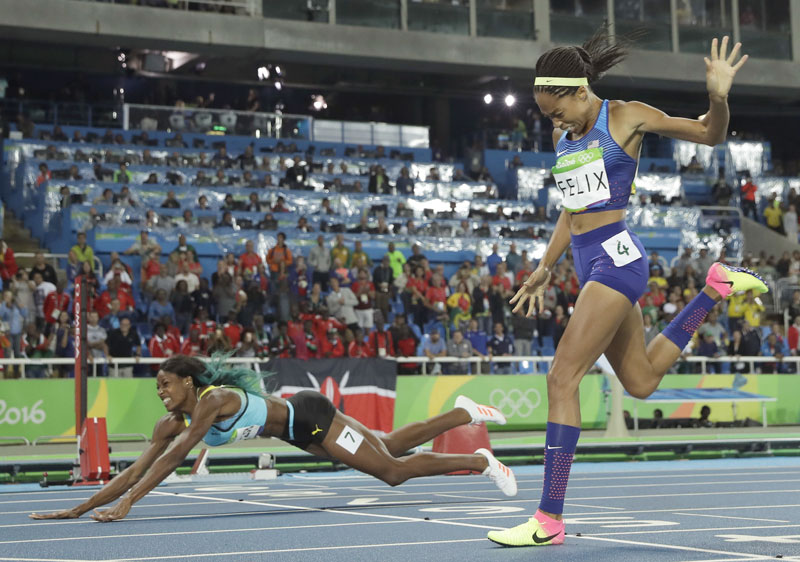 Shaunae Miller looked more like a Major League Baseball player trying to avoid a tag at home than an Olympic runner as she launched her body at the finish line in the 400 meters, diving to edge Allyson Felix for the gold medal.

It worked perfectly. And it was perfectly legal.

A couple of strides before the finish, Miller,  a 22-year-old from the Bahamas ,  threw herself head-first toward the line with both arms stretched out in front of her, landing on the blue track as four-time gold medalist Felix of the U.S. kept running.

Miller was timed in 49.44 seconds; Felix in 49.51 for the silver. They finished in the opposite order at the world championships in Beijing last year.

A runner is allowed to dive the way Miller did. Here's what past U.S. Olympian Lolo Jones said about it on Twitter:

Ppl are mad Miller won with a dive but most pro's at one point have used that tactic to win. Miller didn't cheat Allyson, she won fair.

As for how a photo finish works, though, Miller's extended arms didn't help her win. Her torso had to beat Felix's to the line. And it did.

Section 2 of Rule 164 in the International Association of Athletics Federations' competition rules entitled "The Finish" says "the athletes shall be placed in the order in which any part of their bodies (i.e. torso, as distinguished from the head, neck, arms, legs, hands or feet) reaches the vertical plane of the nearer edge of the finish line."