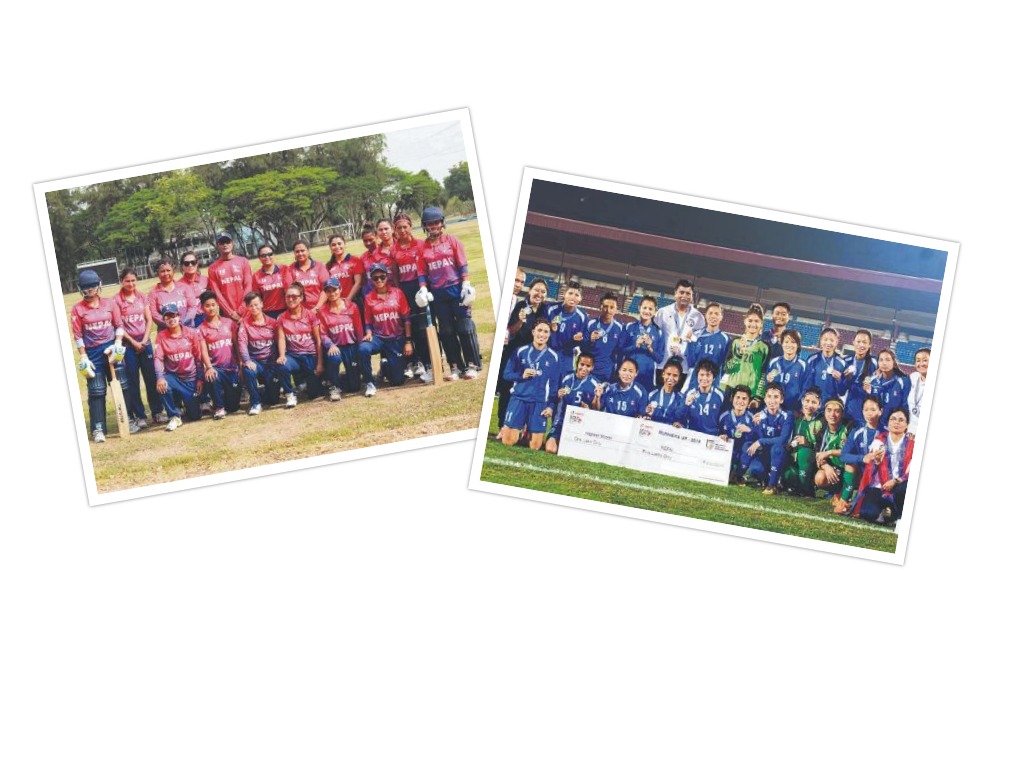 KATHMANDU, March 8: Nepali women athletes have made significant achievements in sports over the years.

Some of them are:

NATIONAL WOMEN’S CRICKET TEAM
Breaking the long-standing hiatus from lack of matches and tournaments, women’s cricket team rose like a phoenix from the ashes after they finished runner-up twice in a gap of months during its participation in Thailand T20 Smash subsequently followed by an inspired performance in ICC World Qualifiers.

In both occasions, Nepal failed to beat better-prepared and well-equipped Thailand. Backed by its board Cricket Association of Thailand, the host team for the T20 smash and favorites during the qualifiers has been progressing in leaps and bounds.

The same administrative body which is suspended in Nepal and the Nepal Sports Council being exposed in its struggle to balance the same attention it gives to men’s cricket. “We were shocked to not see any official upon the arrival at the international airport. We felt humiliated,” said Rubina Chhetri, the captain of Nepal’s national women’s cricket team. None of the officials or managers of the women cricket team were present at the national team’s arrival at Tribhuvan International Airport after its participation in ICC World Cup Qualifiers.

Not long ago, Nepal’s women cricket team was considered equally talented as men’s team. But women’s cricket hit sabbatical most from the CAN suspension in 2016. 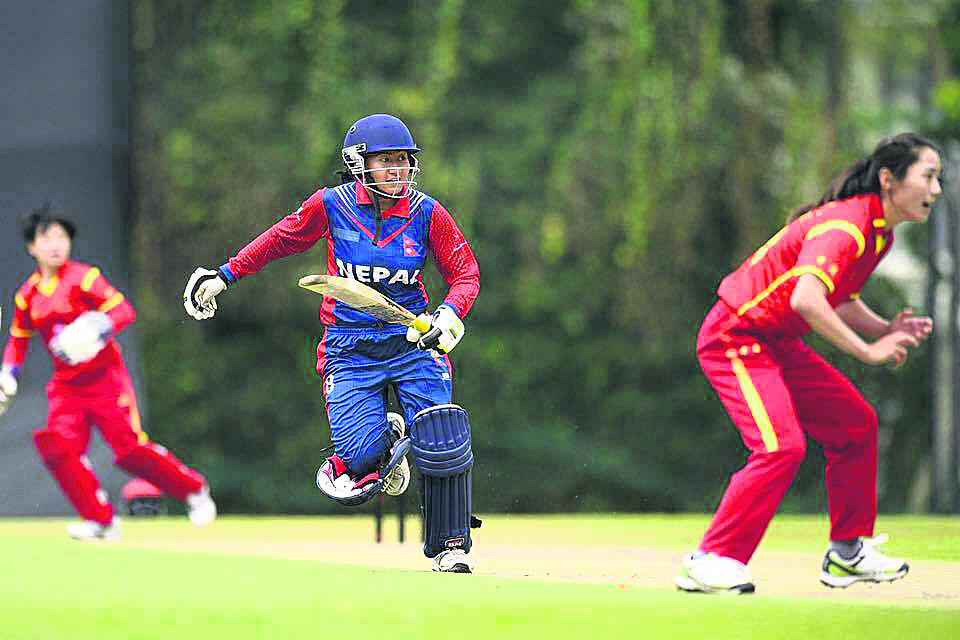 SITA RANA MAGAR
The vice-captain of national women cricket team Sita Rana Magar was honored by Cricketer (Women) of the Year 2019 in NCCS CPAN cricket awards held in Kathmandu on Tuesday. Her contributions in Thailand T20 Smash and ICC World Cup Qualifiers were pivotal for Nepal to finish runner-up in both tournaments.

“Cricket is my passion but slowly it is becoming a profession too. If nothing, it motivates me to do better in cricket,” said Magar in conversation with Republica.

She credits current vice-captain of national men’s cricket team Gyanendra Malla and Coach Sudhir Maharjan as her inspiration to take up the sports. She also thanked her family for the support and believes hard-work and grit can bring you success. “I feel glad that my family has supported me in my journey so far. I believe if you are hard-working, committed and gritty enough the success follows you.”

Lastly, she remains aware of the societal rhetoric regarding women and aims to improve the situation further with her contributions for nation. “We should not suppress ourselves as women. Times are changing and we are the reason the situation in the society is improving as well. We need to aim for more and contribute further for the nation.”

NATIONAL WOMEN’S FOOTBALL TEAM
Nepal saw men’s football rejuvenation in the form of multi-division leagues hosted by All Nepal Football Association but women footballers kept feeding in scraps. But it didn’t stop Nepal from reaching the final of Hero Women’s Gold Cup in Odisha, India last month.
Nepal national women’s football team suffered a humbling 3-1 defeat at the hands of Myanmar in the final but a clear message was delivered that women footballers need equal opportunities to make their mark at the international stage.
In the summit clash at the Kalinga Stadium, a brace from Yee Yee Oo and a strike from Win Theingi Tun helped Myanmar win the match, despite Manjali Kumari Yonjan hitting a superb volley to equalize for Nepal before the second half. Nepal was praised for its attacking game and nullifying Myanmar’s attacks from the flanks.
Nepal that is preparing for the SAFF Championship and the Olympic Qualifiers performed better than the expectation-beating higher-ranked teams like India and Iran.
Nepal lost the first match of the group stage against Myanmar 3-0. But, it made a comeback superbly winning the last two matches against India and Iran to finish second and reach the final. It recorded a historical win over India 2-1 and defeated Iran 3-0 to reach the final.

KANCHHI MAYA KOJU
The departmental team Armed Police Force (APF) Club’s Kanchhi Maya Koju recently won the half marathon title of the third Pinkathon Marathon in Kathmandu. With the win, she managed to win the tournament three times in a row. To win the title, Koju clocked 1 hour 21 minutes and 44 seconds.
Koju, who has been one of the best performers in Nepali running, says that the reason behind her success goes down to playing continuously and having a will to move forward.

“I think continuing the running is an important element to achieve success. Self-motivation is very crucial to move forward and I have taken that into consideration in my career,’’ Koju said, adding, “But, not only that, the support from my friends, my family, the coach and the well-wishers have also helped me move forward. All these things are necessary when you move forward.”

At the age of 38, she has already represented Nepal at the 2014 Athens Olympics and the 2010 Asian Games in Guangzhou, while she holds three national records so far. Adding to the Pinkathon Marathon win for a straight third time, Koju also won the Kantipur Marathon in May of 2018.

At the age when most would prepare for retirement, Koju continues to run with a great zeal and she says that everything starts with running and ends with running to her.

“I have been running for 23 years now. There have been a lot of ups and downs, but I did not stop running. For me, everything starts and ends with running,’’ Koju expressed. “You need to have the will to keep continuing and the motivation to move forward.’’  She has already set targets for the upcoming Eighth National Games. “I have been keeping in mind the Eighth National Games and what I want to achieve in that tournament. Since there are no other tournaments, I have targeted a medal,’’ Koju finished. 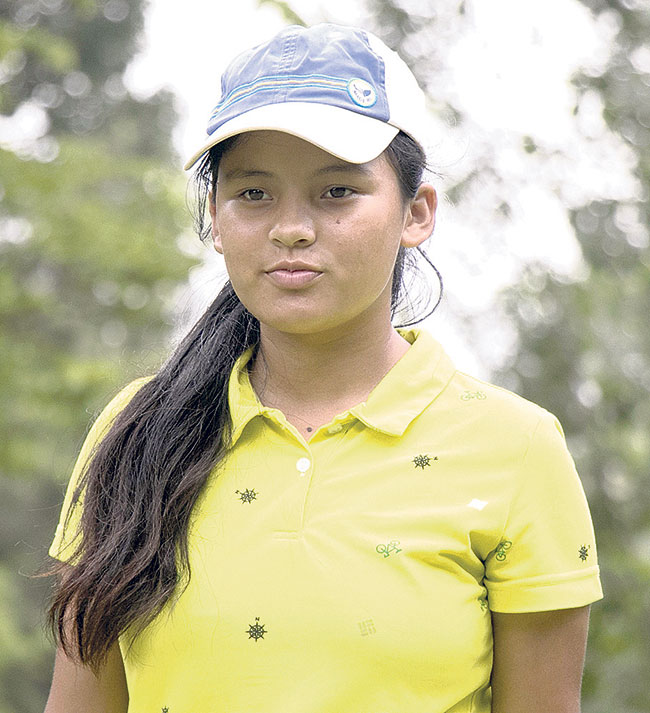 PRATIMA SHERPA
Nepal’s No 1 woman golfer Pratima Sherpa, who rose from hut to putt, stole international limelight after ESPN prepared a film ‘A Mountain to Climb’ about her and Nepal Golf Cup. At the same time, encouragement letter from former World No 1 pro Tiger Woods was one of the inspiring things that happened to Nepal’s young golfer Sherpa.

She earned immense popularity and one of the biggest causes would be to get lesson from her idol Woods as she got the chance to meet the American golfer in Florida.

She spent 30 minutes with Woods at the Woods Medalist Golf Club in Jupiter. Sherpa got the opportunity when she went to USA to attend the premier of the film – ‘A Mountain to Climb.’
Sherpa, the first Nepali woman golfer to participate in the Surya Nepal Golf Tour Qualifying School, won around 30 trophies in 2018 apart from defending the title of the Faldo Series Nepal Championship that helped her travel Vietnam for the grand finals.

KATHMANDU, April 14: The Nepali year of 2075 BS was a memorable time for Nepali sports, with Nepal national cricket... Read More...