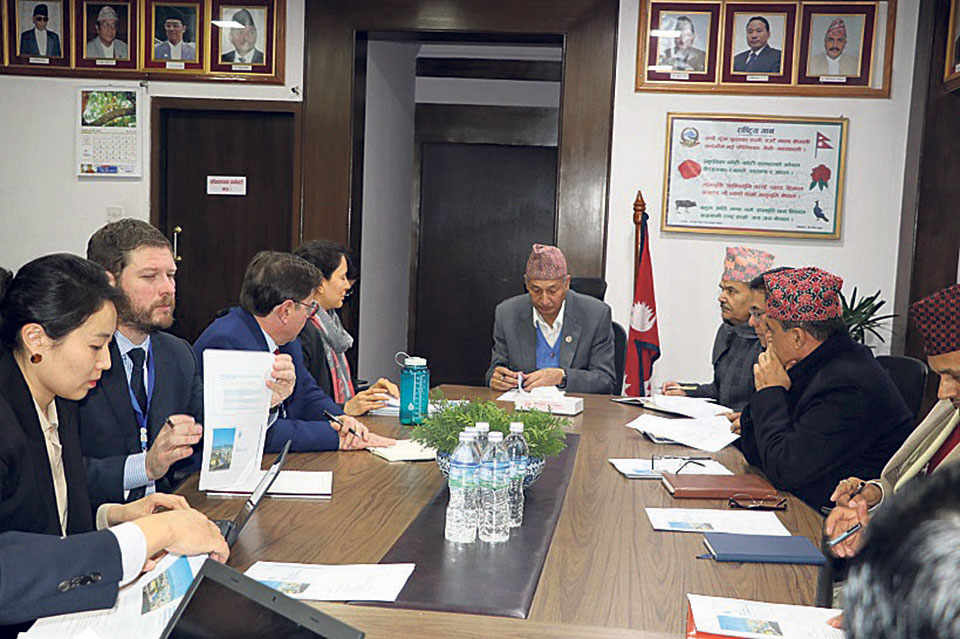 In this photo provided by the Ministry of Finance, the IMF Article IV Mission is seen holding consultations with Minister for Finance Yuba Raj Khatiwada (center) and other senior officials of the ministry. Photo: Ministry of Finance Handout/Republica

KATHMANDU, Jan 18: The International Monetary Fund (IMF) has said that the economic growth of Nepal will moderate to 6% in the current fiscal year 2019/20.

While terming the projected lower growth rate still strong, the Fund has recommended the government to focus on cementing the growth and avert possible risks that can derail the economy later on.

Organizing a press briefing to make public its preliminary findings of the 'Article IV Consultation' in Nepal, the visiting IMF's mission chief Laura I. Jaramillo Mayor said that the recent slowdown of Indian economy, fall in the agricultural production and sluggishness in remittance inflow could moderate the growth of Nepal in the current fiscal year  – FY2019/20 to 6%.

“Economic growth in recent years has been above the long-term average thanks to the stable political environment, reliable electricity supply and also the ongoing reconstruction efforts after the 2015 earthquakes,” said Jaramillo Mayor.

While the growth in the current fiscal year is projected to be lower than the last fiscal year as well as the government's target of 8.5%, the IMF mission says that it expects the pace of the growth still to be 'strong'.

“We expect the economic growth to remain healthy. But, we do see the signs of moderation. And, that's because there been slowdown in India given the linkages to trade, remittances and investment. Remittance has been sluggish and that is likely to affect consumption in Nepal. Agricultural production is expected to be weaker this year than it was one year ago,” she said.

Following the consultation meetings, the IMF mission seems to have been impressed with progress on some indicators of the economy.

“We noticed some notable improvements on other fronts that put the economy on a safer footing,” said Laura I Jaramillo Mayor, IMF Mission Chief to Nepal. “We see the current account deficit has been narrowing and gross forex reserve has been stabilized at adequate levels in recent months. Credit to the private sector remains substantial at about 85% of the GDP, but it's not growing at the cautious level. This will help limit risk in the financial sector,” she added.

The IMF mission has also recommended the government to focus on maintaining the soundness of the financial sector, preserving fiscal prudence as the transition to fiscal federalism advances and bolstering private investment.

Policies needed to cement the growth 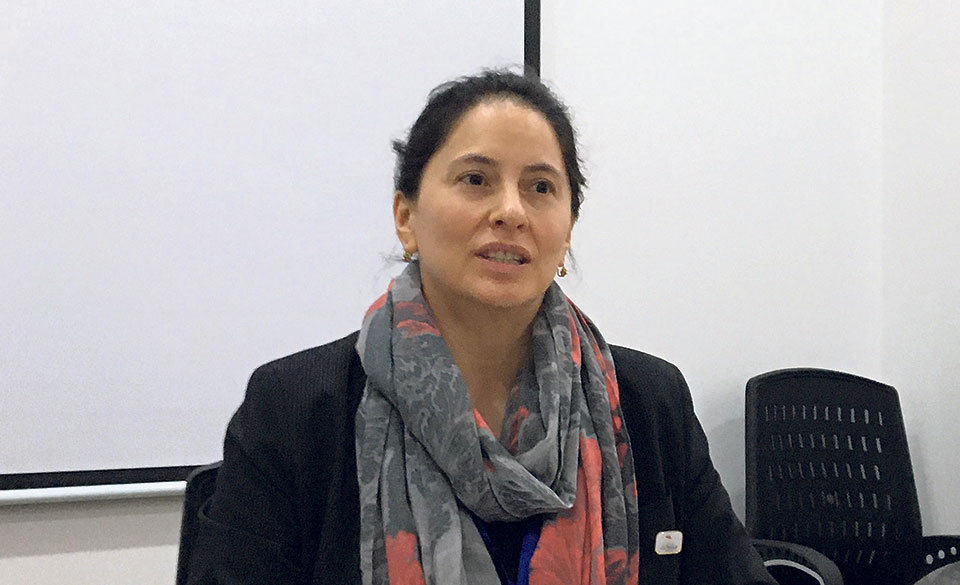 Laura I Jaramillo Mayor, IMF Mission Chief to Nepal
What's the economic outlook for the current fiscal year – FY2019/20?
Growth in Nepal has been high in recent years due to greater political stability, improved electricity supply and reconstruction activities after the earthquake. Growth will still continue to be strong in Fiscal Year 2019/20, but some of the elements that were in the past year will not be there. In particular, the slowdown in India is going to affect the economy. The slower remittance will also affect the economy because remittances play a very important role in consumption. And, then the agricultural production will be lower than one year ago. We think the growth will moderate. I want to emphasize it still is healthy. Now policies are needed to cement the growth while averting risks that could derail the economy later on.

What is the mission's assessment on financial sector?
International experiences show that when the credit growth is excessive, the economy can end up in a bad place. That is why it is crucial to maintain a sound financial system. We support the NRB's implementation of policy to contain the credit growth. We agree with the measures that encourages more prudent assessment by banks of their borrowers' credit capacity. We also welcome the activation of counter cyclical capital buffer that will require banks to maintain higher level of capital adequacy. These measures in place will strengthen the financial system. They will foster higher quality lending that doesn't compromise the economic stability.

How do you see Nepal's transition to federalism?
I want to emphasize the need to preserve fiscal prudence as the transition to fiscal federalism advances. We welcome the upgrade to the tax system to the customs and this will help raise revenue to support the priority spending. The transition to the federalism is a monumental challenge. It needs to be carefully managed, in particular to protect the fiscal stability and sustainability. The overall expenditure envelope for provincial and local governments should match the resources available. We also underscore the need to have tight limits on any borrowings at these levels of governments. On spending, we recognize that some important steps have been taken to improve public financial management and further efforts are needed to ensure that spending of high quality is executed in a timely manner.

Your say on the government's efforts to attract foreign investment?
The authorities have made some progress in this front, particularly in the legislative front. But now the legislations need to be supported by a more enabling implementation environment. Further efforts are needed to ensure that high quality investment projects move forward in a clear and in a timely manner. This calls for adequate staffing, matching of skills of the staffs with their roles and aligning incentives within the ministry and across ministries to move these important projects forward.

High levels of remittances can spark a vicious cycle of economic stagnation and dependence ... Read More...

Fossil fuel-based vehicles should be converted into electric ones: Minister Jhakri
42 minutes ago