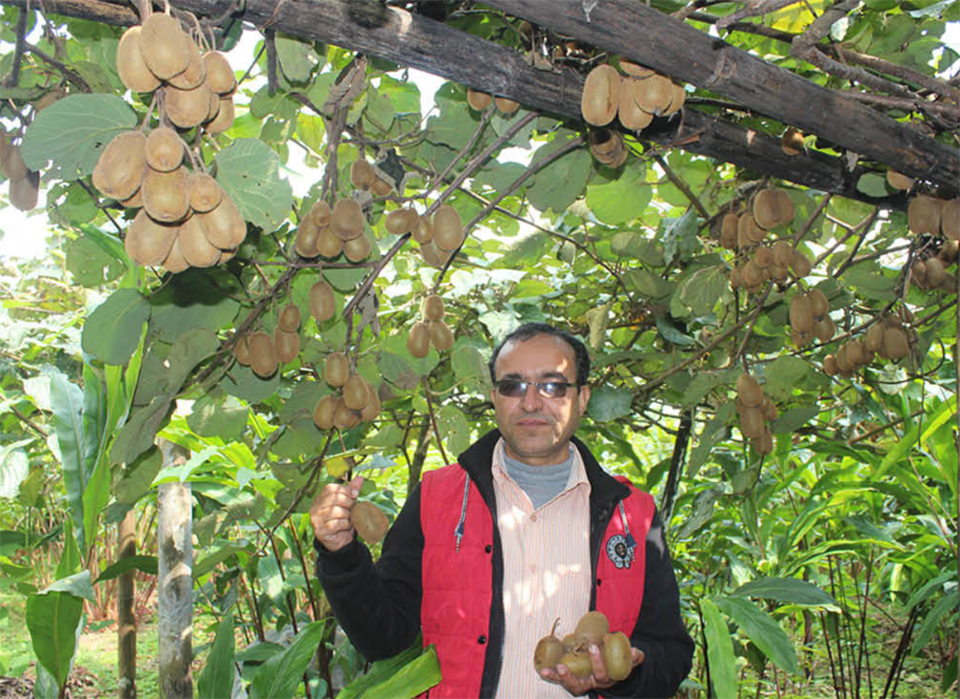 Tara Mani Khatiwada in his farm at Sulubung of Ilam. Photo: Bhim Chapagain/Republica

ILAM, Sept 5: Farmers of Ilam are expecting a better harvest of kiwi fruits this year thanks to favorable weather conditions.

Local farmers say they have also benefited from 'Kiwi Zone Program' which was implemented by the government this year to promote commercial kiwi farming. Under the program, farmers received training as well as necessary farming tools.

"Production will increase this year as weather has remained favorable so far," Khatiwada, a pioneering kiwi farmer in the district, told Republica. "Not only in my farm, production will increase in all the farms in the village," he said, adding that some 50 households in Sulubung are involved in commercial farming of kiwi fruits.

Local farmers start harvesting kiwi fruits after mid-November. However, red kiwi fruits are ready for harvest, according to Khatiwada. "I had grown some 500 kg of red kiwi fruits last year. This year, the production is likely to double," he added. "Rid kiwi fruits ripen faster than other kiwi varieties."

Though production of kiwi fruits is likely to increase in Sulubung, production is expected to fall in other parts of the district due to hailstones, said Khatiwada.

Kiwi fruits produced in the district fetched farmers as high as Rs 600 kg in the initial years. It is traded at Rs 100 to Rs 250 per kg these days.

Ganga Bista, a farmer from Sakhejung, is also expecting good harvest this season. "Production is expected to increase this year as the kiwi zone program has helped farmers a lot. Local farmers have received trainings starting from production to processing," he added. Bista sells around Rs 2 million worth of kiwi fruits and Rs 1.2 million worth of saplings every year.

IILAM, May 16: Four-year-old Swastika Rai of Mai Municipality-8 in Kalkatte, Ilam is desperate to see her mother since a long... Read More...