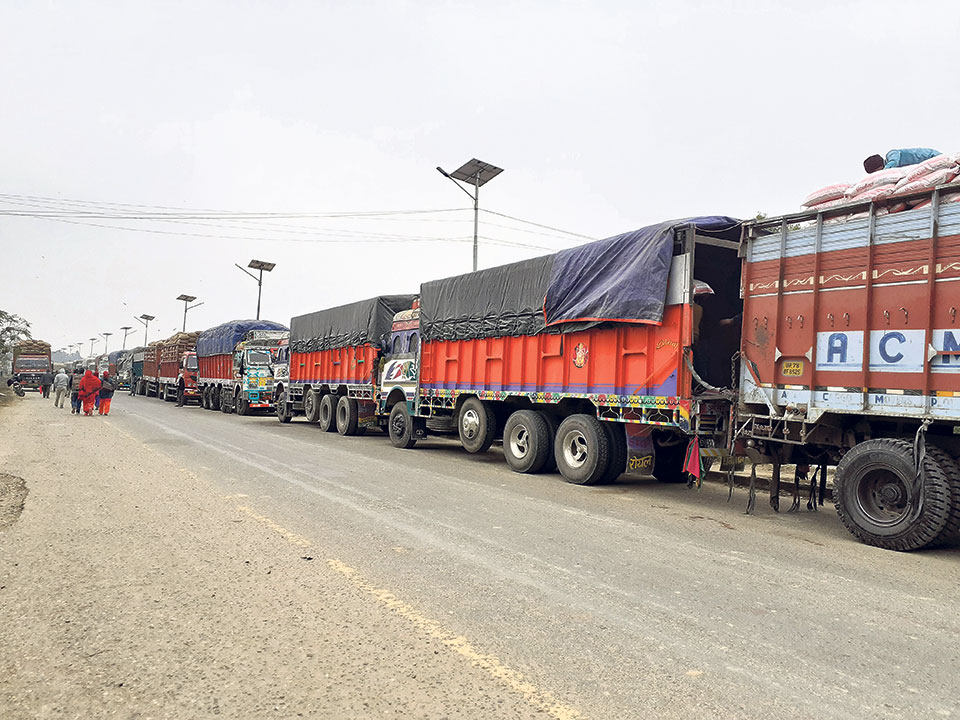 NEPALGUNJ, Jan 5: With delays in construction of the Integrated Check Post (ICP), the customs check point has become chaotic in Nepalgunj, the main border point of western tarai.

These vehicles are parked along the four-lane road of Nepalgunj-Jamunaha. According to Nepalgunj Customs Office, due to lack of enough space for examining the vehicles, they are kept in the road. The customs office finds it hard to run smoothly for this reason.

“As the ICP is not constructed on time, it is creating problem in examining the vehicles. These vehicles loaded with materials are halted on the road. According to rules, the vehicles need to be parked in the yard of customs office, but due to lack of enough space here, it is not possible,” said Shanti Ram Niraula, chief of the office.

After construction of the ICP, entrepreneurs will get all official works done from one place. The ICP will house customs office, bank, animal quarantine, plant quarantine, and the office of food technology and quality control within the same premises.

According to Homnath Bhusal, engineer of Nepalgunj Urban Development and Building Construction, the Indian side is causing delays in the construction. “The ICP will be constructed by the Indian government, but I don't know why it is getting delayed, we are unaware about it,” said Bhusal.

SURKHET, Aug 31: Nepalgunj Sub-metropolitan city has received one hundred cows back on Friday night which were left stranded in... Read More...

NEPALGUNJ, July 21: Excessive heat has taken its toll in this city in Banke, affecting daily activities of the locals. Read More...

Tiwari is new DG of Department of Industry
8 hours ago