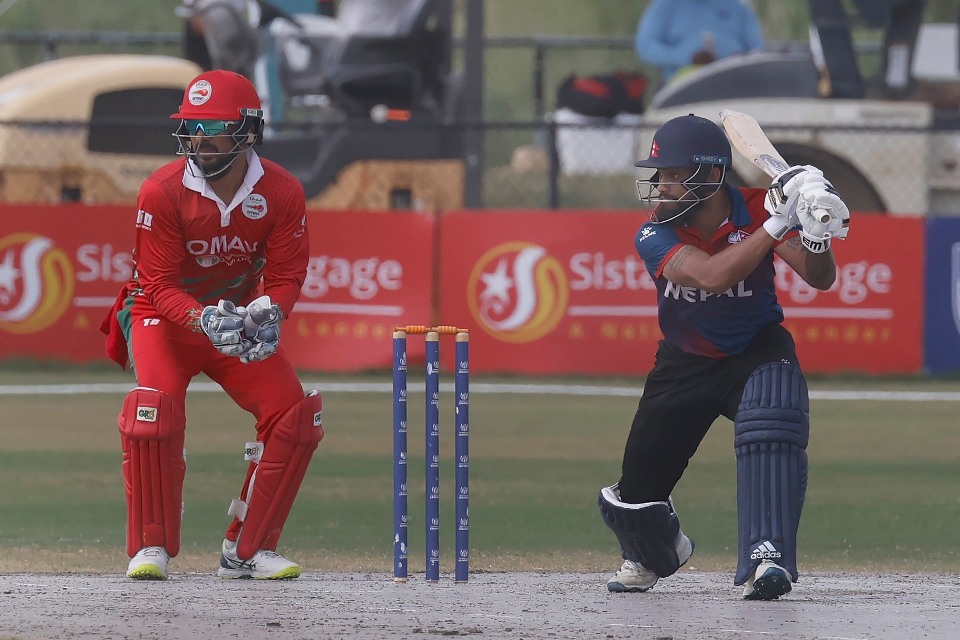 KATHMANDU, June 15: Nepal has registered an easy win over Oman in the ICC World Cup Cricket League -2. Nepal defeated Oman by seven wickets in the match held at Moosa Stadium in Houston, Texas of the United States of America.

Nepal's Karan KC alone took five wickets for registering a smooth win over Oman. Oman elected to bat first after winning the toss. It managed to collect 163 runs losing all its wickets in 46.5 overs.

Nepal met the 164-run target in 33.1 overs at the loss of three wickets. Opener batsman duo of Nepal, Kushal Bhurtel and Asif Sheikh partnered for a century for Nepal. Bhurtel made 56 runs with the help of five fours facing 75 balls while Sheikh collected 62 runs including one six and seven fours in 86 balls.

Similarly, Dev Khanal made 10 runs including one four in 12 balls and vice-captain Rohit Kumar Poudel made 26 runs, not out, in 21 balls. He hit one six and one four. Dipendra Singh Airee, who was also not out, made seven runs.

Toward bowling, Fayyaz Butt of Oman took two wickets while Khawar Ali took one wicket. Oman, batting first before this, was confined to 163 runs in the allotted 50 overs. Captain Zeeshan Maqsood played a half-century partnership. He collected 52 runs including three fours facing off 100 balls. Similarly, Sandeep Goud made 47 runs including one six and three fours while facing 91 balls.

With this win, Nepal has climbed to the fifth position in the score table. It has collected 15 points by winning seven of the 15 matches it has played so far. Nepal will play against the host team USA at 9:15 tonight in its next match.

Nepal to play its opening match with Oman

ASIA CUP QUALIFIERS: Nepal puts 221 runs on board against Oman

KATHMANDU, Aug 29: Nepal has set a target of 222 runs to Oman in its first Asia Cup Qualifier match... Read More...

President Bhandari emphasizes on role of law education for promotion of rule of law
8 hours ago
Rs 10,000 fine slapped on Rajpur's mayor for not providing information
8 hours ago