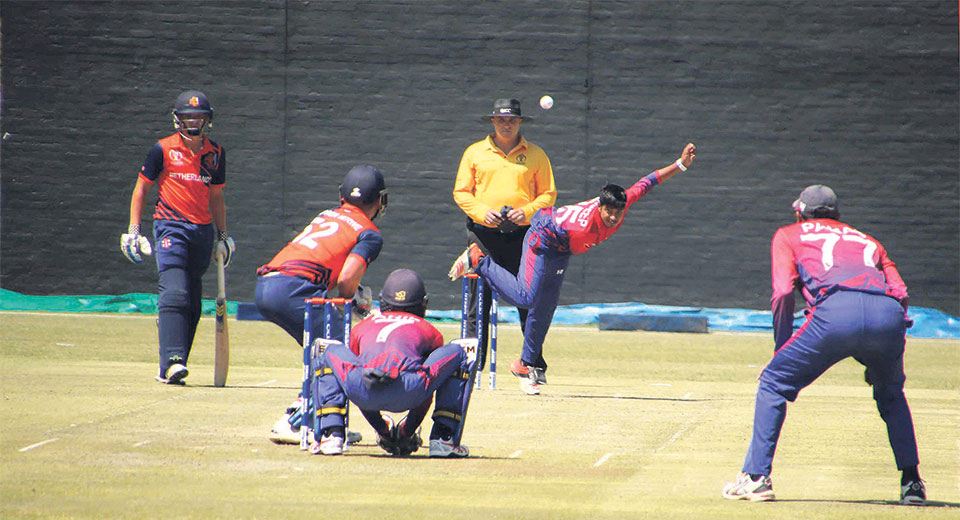 KATHMANDU, March 21: The national cricket team ended its ICC Cricket World Cup Qualifier 2018 campaign last week with a historic achievement of securing the One Day International (ODI) status and an eighth-place finish in Zimbabwe above two fellow associates Papua New Guinea (PNG) and Hong Kong. This is the first time Nepal has been recognized as an ODI team in the cricket world.

There were plenty of good performances from both the batsmen and the bowlers who helped Nepal achieve the elite division. While there were forgettable displays too that need to be addressed in the days to come with Asian Cricket Council’s Asia Cup, to be organized soon, being the main focus.

Here are some hits and misses of the tournament:

When it comes to batting, skipper Paras Khadka’s name seldom fails to come on top of the list. Khadka again showed his prowess with his bat scoring 241 runs in six matches.

He maintained the strike rate of 87.83 with the highest score of 75 runs in a six-wicket defeat to Afghanistan. He hit 34 boundaries and two sixes in the tournament.

Despite a fairly inconsistent spell in both the Division Two matches and the qualifiers, the U-19 captain just did enough to feature in the second place of the batting hits of the tournament.

He made 143 runs in six matches with a strike rate of 70.79 including 12 fours and four sixes in the tournament. His individual best came against the cross-over playoff against the Papua New Guinea (PNG) when he hit an unbeaten 50 to propel Nepal to a commanding six-wicket win.

Despite limited to bowling duties, spearheading the Nepali bowling attack, Sompal Kami continued to make significant contributions with the bat.

He became one of four Nepali players to reach the three digits figure followed by Aarif Sheikh, as he got 112 runs in six matches with a 64.73 strike rate. He hit a total of 11 boundaries and a six in the tournament and his highest run was unbeaten 37 in a five-wicket victory over Hong Kong in its last group stage match.

His 36, the highest in the match for Nepali batsmen against Netherlands, went in vain as Nepal lost the seventh-place finish.

The teenage sensation Sandeep Lamichhane continued to make headlines one tournament after another. He claimed 13 wickets in six matches in 57.4 overs he delivered in the tournament. He maintained the economy of 4.10 with the best bowling figure of 29/4 against PNG in an important match for the ODI status.

Sompal Kami
The three usual suspects in any bowling charts of Nepal always includes Sompal Kami as one of the top-trio. Sompal remained Nepal’s best allrounder in recent tournaments making the both batting and bowling lists.

The first international tournament for Lalit Rajbanshi in senior colors went convincing as he claimed five wickets in the six matches he played.

With an economy of 4.31, Rajbanshi bowled 41 overs and had the best bowling figure of 38/2.  He played all the group matches ahead of veteran Shakti Gauchan and kept his place in the XI making crucial contributions for the team.

A part of three mainstays of Nepali batting in last decade or so, vice-captain finds himself among the flops of the tournament second time in a row scoring 73 runs in six matches with an unfathomable strike rate of 39.45.  His best 32 came in a 116-run defeat at the hands of the host Zimbabwe in Nepal’s first group stage match. Five players in the team scored more runs than him including youngsters Sheikh and Rohit Kumar Paudel who bat at 6 and 7 respectively.

Playing as an opener in few games, Anil Kumar Sah simply failed to provide any oath with his bat. In the light of the four games he played in, Sah scored just 50 runs with a strike rate of 55.55.

He hit seven boundaries and had the highest of 26 against Hong Kong. A lot was expected from him after a poor run of form by Dilip Nath, but he failed to deliver at an unnatural position.

After failing to impress in the two games he played in, wicketkeeper-batsman could not contribute much with his bat in Zimbabwe. He scored six runs in two opportunities he got at the start of the group stage.

Bowling
Paras Khadka
Captain Khadka had the most notable impact with the bat for Nepal, but his bowling weathered off on qualifiers.

Mostly dependable, Khadka struggled to fetch any wickets in four innings of the six matches he played in the tournament and gave away 106 runs in 18 overs. His economy rate of 5.88 was the worst recorded by any Nepali bowler in the tournament.

KMC to run free ambulance service during Dashain
25 minutes ago