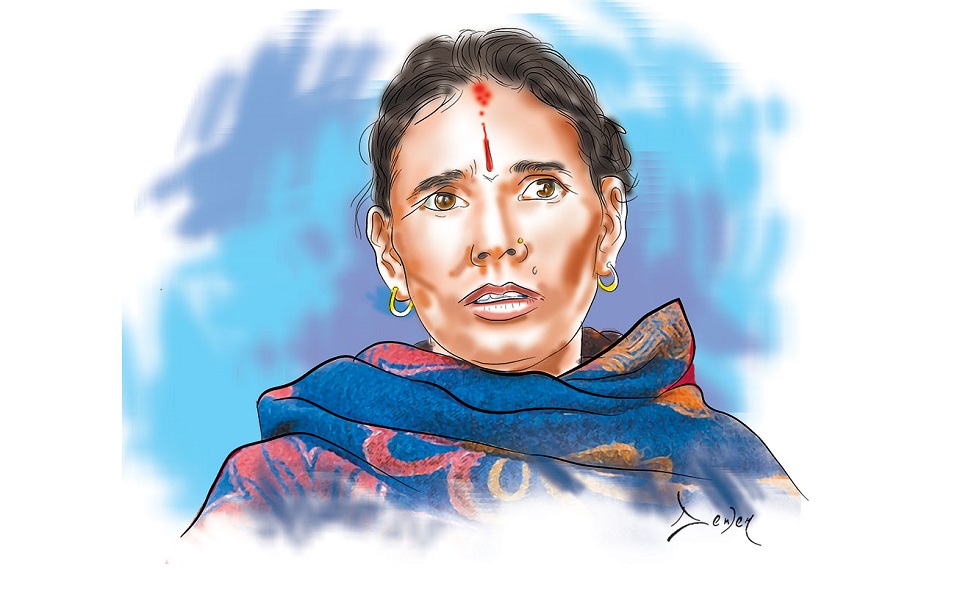 KATHMANDU, July 31: Durga Devi was getting ready for work at Bhimdatta Municipality when she received a call early this morning. Eight police officers, against whom she had filed a case for tampering with evidence in the rape and murder of her 13-year-old daughter Nirmala Panta, got a clean chit from the district court yesterday. This is a rare case where the complainant celebrates victory of defendants. Durga Devi was happy to hear of the court verdict. “I was not aware of the details of the complaint back then, but a sense of guilt later bothered me,” she told Republica.

"I am happy about the verdict. But justice has not yet been delivered, I wish that will be done soon," said Durga Devi. "If they did not intentionally do anything wrong, why should they suffer? I wanted to withdraw the case, but then these court cases are complex. Despite my appeal, the case did not end easily," she added.

According to her, 'Indra Prasad Aryal, Badri Prasad Bhushal had come from Kathmandu and she signed the paper due to their pressure. A case against the eight police officers was registered at the local police station on December 18, 2018, and was filed at the district court on march 6, 2019.

"Activist Sharada Chand and others came. The advocates had come all the way from Kathmandu. They told me that I should sign the paper, as that would pave a way for justice. I was not aware about the details of the complaint, but they wrote some lies as well," she reports, adding that she never knew Inspector Jagadish Bhatta, but the case details that she went to his house.

The tragic incident that happened on 27 July, 2018 in Bhimdutta Municipality, Kanchanpur had devastated Durga Devi. Her daughter's dead body was found in a sugarcane field. It made her a soft target of many interest groups. “I stopped talking to many people,” said Durga Devi.

After watching a few video clips of Dilip Singh Bista, 42, where he had confessed the crime, Durga Devi started to think of the case differently, though DNA reports still put her in a dilemma. As the case matured, the experts ruled out DNA's credibility, and suggested that the police look for circumstantial evidence. Durga Devi took that in a positive note. But when the same was not acknowledged by Nirmala's father, she was disheartened.

While she blames the police, administration, and the media for the delayed course of justice, the biggest culprit in her eyes is Yagyaraj, Nirmala's father. "He was not honest. We all came to know later that Dilip was a sick man, with all ingredients to hatch the crime. He talked about Nirmala's torn trouser, cycle chain and the 20 rupees note," she fumes.

She added that it was due to Yagyaraj's firm stand in support of Dilip that things got derailed. "Others say politics, but in my eyes, he (Yagyaraj) played the biggest politics," she said.

Yagyaraj and his second wife briefly came to the scene during the Justice for Nirmala movements. But they disappeared after the protests. Things had gone from bad to worse between Durga Devi and Yagyaraj after the former took a compensation amount from the government. Yagyaraj had thrashed and beaten her.

With the eight police personnel getting clean chit from the court, the case is expected to take a judicial course without delays. The government lawyers had earlier stated that a court case against the police officers was a hurdle against free and fair follow-up. "There would be two parallel cases with contradictory claims. It was challenging for the judiciary to move ahead with it. Now things are easier," said DSP Angur GC, one of the eight police officers acquitted on Thursday.

KATHMANDU, Nov 28: The 16 days of activism against gender-based violence is currently unfolding in over 180 countries, and Durga... Read More...

As the world, including Nepal, marked International Day for the Elimination of Violence against Women on Sunday, and as the... Read More...