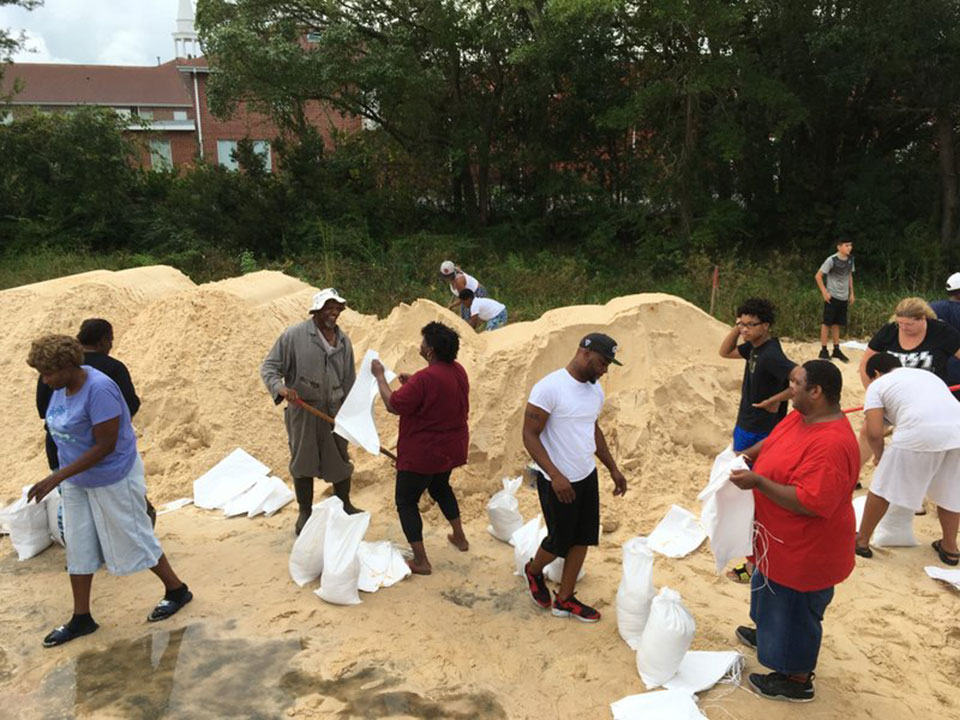 NEW ORLEANS, Oct 8: Hurricane Nate came ashore on a sparsely populated area at the mouth of the Mississippi River on Saturday and closed in on Mississippi, pelting the central Gulf Coast region with strong winds and heavy rains.

Nate was forecast to make its second landfall near Biloxi, Mississippi, and threatened to inundate homes and businesses.

The center of the storm passed to the east of New Orleans, sparing the city its most ferocious winds and storm surge. And its quick speed lessened the likelihood of prolonged rain that would tax the city’s weakened drainage pump system.

The city famous for all-night partying was placed under a curfew, effective at 7 p.m., but the mayor lifted it when it appeared the storm would cause little problems for the city. Still, the streets were not nearly as crowded as they typically are on a Saturday night.

Along the Mississippi coast, cities such as Gulfport and Biloxi were on high alert. Some beachfront hotels and casinos were evacuated, and rain began falling on the region Saturday. Forecasters called for 3 to 6 inches (7 to 15 centimeters) with as much as 10 inches (25 centimeters) in some isolated places.

Nate weakened slightly and was a Category 1 storm with maximum winds of 85 mph (137 kph) when it made landfall in a sparsely populated area of Plaquemines (PLAK’-uh-minz) Parish. Forecasters had said it was possible that it could strengthen to a Category 2, but that seemed less likely as the night wore on.

“If it floods again, this will be it,” said Larry Bertron as said as he and his wife prepared to leave their home in the Braithwaite community of vulnerable Plaquemines Parish. The hurricane veterans lost one home to Hurricane Katrina in 2005 and left the home they rebuilt after Hurricane Isaac in 2012.

Governors in Louisiana, Mississippi and Alabama declared states of emergency. The three states have been mostly spared during this hectic hurricane season.

“This is the worst hurricane that has impacted Mississippi since Hurricane Katrina,” Mississippi Emergency Management Director Lee Smithson said Saturday. “Everyone needs to understand that, that this is a significantly dangerous situation.”

Officials rescued five people from two sailboats in choppy waters before the storm. One 41-foot sailboat lost its engine in Lake Pontchartrain and two sailors were saved. Another boat hit rocks in the Mississippi Sound and three people had to be plucked from the water.

Louisiana Gov. John Bel Edwards urged residents to make final preparations quickly and stressed that Nate will bring the possibility of storm surge reaching up to 11 feet in some coastal areas.

“It’s going to hit and move through our area at a relatively fast rate, limiting the amount of time it’s going to drop rain,” Edwards said. “But this is a very dangerous storm nonetheless.”

Streets in low-lying areas of Louisiana were already flooded. Places outside of levee protections were under mandatory evacuation orders and shelters opened there.

Some people worried about New Orleans’ pumping system, which had problems during a heavy thunderstorm on Aug. 5. The deluge exposed system weaknesses - including the failure of some pumps and power-generating turbines - and caused homes and businesses to flood. Repairs have been made but the system remained below maximum pumping capacity.

On Alabama’s Dauphin Island, water washed over the road Saturday on the island’s low-lying west end, said Mayor Jeff Collier. The storm was projected to bring storm surges from seven to 11 feet near the Alabama-Mississippi state line. Some of the biggest impacts could be at the top of funnel-shaped Mobile Bay.

“Hurricane Nate is expected to bring life-threatening storm surges, strong winds and tornados that could reach across the Panhandle,” Scott said. The evacuations affect roughly 100,000 residents in the western Panhandle.

“This is the worst hurricane that has impacted Mississippi since Hurricane Katrina.” Mississippi Emergency Management Director Lee Smithson.

At 11 p.m. EDT Saturday, Nate was about 35 miles (56 kilometers) southwest of the mouth of the Mississippi River. The storm was expected to quickly weaken as it cuts a path through the Southeast on its way to the Mid-Atlantic and Northeast regions, which could see impacts from Nate early next week.

In New Orleans, ahead of Saturday night’s curfew, some bars were closed in the French Quarter but music blasted from others.

“We’re down here from Philly and we’re not going to just stay in our hotel room,” said Kelly Howell, who was drinking with friends at The Bourbon Street Drinkery.

PORT-AU-PRINCE, Oct 5: Hurricane Matthew roared into the southwestern coast of Haiti on Tuesday, threatening a largely rural corner of the impoverished... Read More...

COVID-19 risk in Nepal is beyond prediction: Minister Gyawali
20 hours ago

An open letter to Ram Narayan Bidari
8 hours ago

Trading via Tatopani and Rasuwagadhi still closed despite government assurance: Importers
5 hours ago

Trading via Tatopani and Rasuwagadhi still closed despite government assurance: Importers
5 hours ago