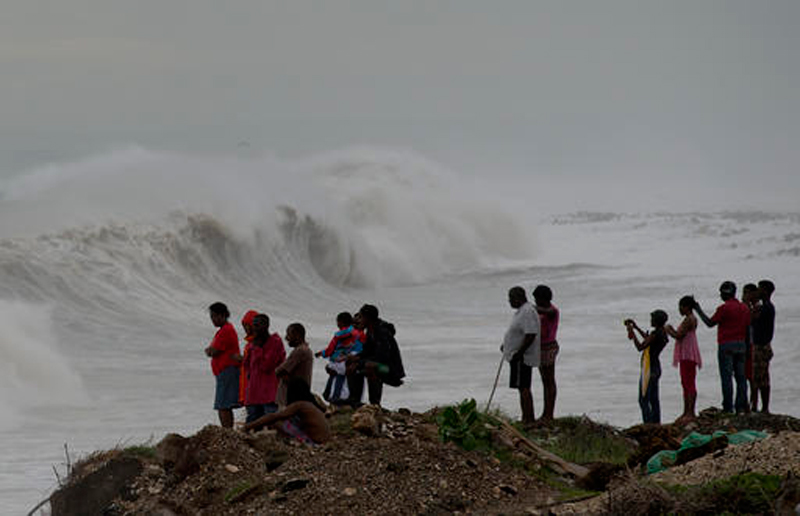 PORT-AU-PRINCE, Oct 5: Hurricane Matthew roared into the southwestern coast of Haiti on Tuesday, threatening a largely rural corner of the impoverished country with devastating storm conditions as it headed north toward Cuba and the eastern coast of Florida.

The dangerous Category 4 storm made landfall around dawn on Haiti's southern peninsula, where many people live along the coast in shacks of wood or simple concrete blocks that are ill-suited to the force of the system's maximum sustained winds of 145 mph (230 kph).

Matthew was causing major damage though the extent was not immediately known, according to Marie Alta Jean-Baptiste, the director of the country's Civil Protection Agency.

"It's much too early to know how bad things are but we do know there are a lot of houses that have been destroyed or damaged in the south," Jean-Baptiste told The Associated Press.

Haitian authorities had tried to evacuate people from the most vulnerable areas ahead of the storm but many had been reluctant to leave their property. Some sought shelter only after the worst was already upon them.

"Many people are now asking for help, but it's too late because there is no way to go evacuate them," said Fonie Pierre, director of Catholic Relief Services for the Les Cayes area, who was huddled in her office with about 20 people.

Matthew was expected to bring 15-25 inches of rain, and up to 40 inches (100 centimeters) in isolated places, along with up to 10 feet (3 meters) of storm surge and battering waves, said Dennis Feltgen, a meteorologist and spokesman for the U.S. National Hurricane Center in Miami.

"They are getting everything a major hurricane can throw at them," Feltgen said.

The storm was moving along the Windward Passage between Haiti and Jamaica, where it was also dumping heavy rain that caused flooding in parts of the country. It was headed for southeastern Cuba and then into the Bahamas.

The hurricane center said it would likely issue a tropical storm watch or hurricane watch for the Florida Keys or the Florida peninsula and that it could create dangerous beach conditions along the East Coast later in the week.

As dawn broke, people in the south coast tourist town of Port Salut described howling winds and big waves slamming the beaches and washing over the coastal road.

"The winds are making so many bad noises. We're just doing our best to stay calm," said Jenniflore Desrosiers as she huddled with her family in her fragile cinderblock home, which had sprung numerous leaks from pelting rain.

Haiti's civil protection office said a number of south coast towns partially flooded overnight. Landslides and downed trees on roadways were preventing movement in numerous areas. The few places that were on the electrical grid had apparently lost power and cellphone service was spotty.

Haitian officials spent Monday trying to persuade shantytown residents to take advantage of shelters being set up, but many refused.

"If we lose our things we are not going to get them back!" said Toussaint Laine, an unemployed man who lives with his family in a shack in Tabarre, a suburb of Port-au-Prince, the capital.

In an unregulated sprawl of shacks built on hillsides near the northern edge of the capital, some poor families did what they could to reinforce their tin-and-tarp home and hoped for the best.

"I know my house could easily blow away. All I can do is pray and then pray some more," Ronlande Francois said by the tarp-walled shack where she lives with her unemployed husband and three children.

Haiti's civil protection agency earlier reported one death, a fisherman who drowned in rough water churned up by the storm. That raised Matthew's death toll to at least three. One man died in Colombia and a teen was killed in St. Vincent and the Grenadines as the storm moved through the Caribbean.

Cuba's government declared a hurricane alert for six eastern provinces and workers removed traffic lights from poles in the city of Santiago to keep them from falling when the storm hit.

At one point a Category 5 storm, and the region's strongest hurricane since Felix in 2007, Matthew was expected to make landfall in Cuba about 50 miles (80 kilometers) east of the U.S. Navy base at Guantanamo Bay, where authorities flew out about 700 spouses and children of service members.

MIAMI/NEW YORK, Aug 30: Florida residents were bracing for a hurricane on Thursday that was threatening to smack into the... Read More...

The plus side of being thick-skinned

When you were a kid, did you cry and go home every time someone yanked your hair or did you... Read More...