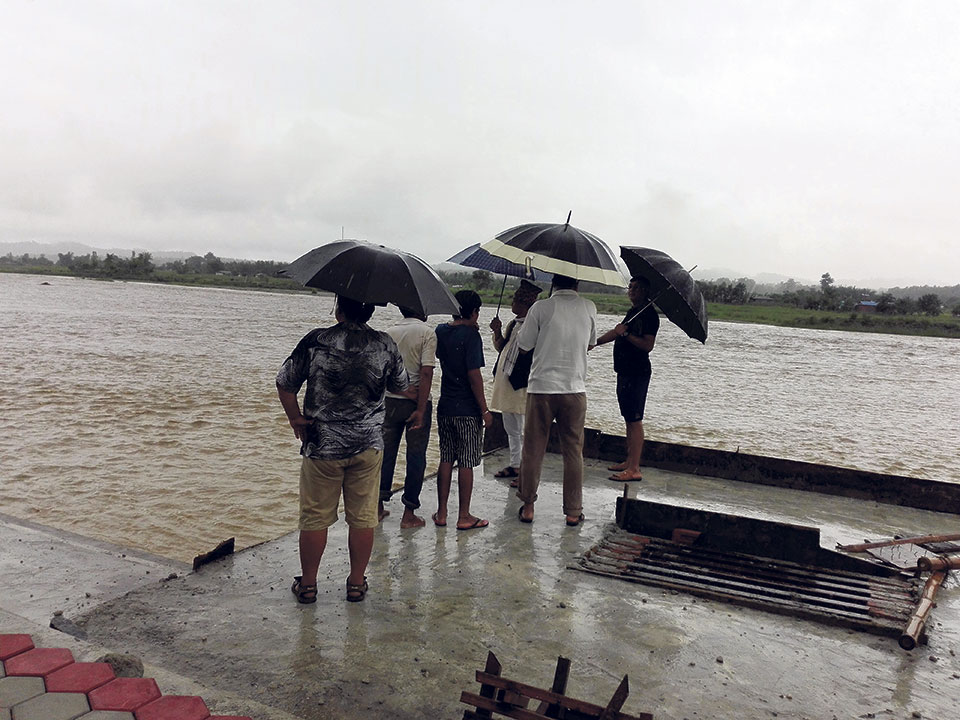 Udayapur district officials observe the flooding caused by the Triyuga River in Gaighat, the headquarters of the district, Tuesday. Photo: Maheshwar Chamling Rai/Republica

BAJURA, July 4: With the rise in the incidents of monsoon-triggered disasters, hundreds of households across the country face the risk of being displaced. The risk is high in Banke, Bajura, Dolpa, Sarlahi and Udayapur, among other districts.

Dozens of settlements in Banke are living in the fear of displacement after frequent land erosion. Incessant rains for the past few days have led to erosion of weaker land and mounds.

Meanwhile in Bajura district, the increasing risk has forced the locals to stay awake at night. Around 50 households in Sudada and six households of Saptad Chhededaha Rural Municipality of the district are living in constant fear after road tracks were opened down the settlements using excavators.

“We have been living in animal sheds ever since it started raining,” said Deepak Nath, a local of Naina. The village has around 30 households. Among them, 12 families are already displaced by disasters from the previous monsoon.

Mane Bista, another local, said landslides have started taking place right in front of their houses. “It all started getting worse after the road construction,” he added. Landslides of previous year had displaced his family.

Engineer Prayag Raj Joshi blamed it on road construction without proper planning and research on environmental impacts. Steep hills and high altitude are also the major reasons behind the landslides, he said.

Landslides have damaged a section of Bhetti-Motipur road in Dolpa district. Around 10 meter-long stretch of the road at Thulibheri Municipality remains badly damaged for the past three weeks. The landslide debris obstructing the road has not been cleared yet, forcing commuters to take risky alternative routes.

“The failure to repair and operate the road on time has forced public vehicles to take a risky alternative route. Dozens of jeeps take the risky route every day, endangering the lives of hundreds of passengers,” said Amar Singh Kathayat, a local of Motipur.

Local entrepreneur Khamba Kathayat said boulders and landslides fall down from the hills without a warning. “As the roads are narrow, there is little space to dodge it in case of such events. Incessant rainfalls have made the road very risky.”

The locals accused the administration of doing nothing to reopen the damaged roads. However, Ganesh Bahadur Shahi, chief of Thulobheri Municipality, said they have made a field visit to the site but they do not have much options to reduce the landslide risks as big boulders continually fall from the hills.

Similarly, poor drainage system has led to inundation in various parts of Nepalgunj Sub-metropolitan City of Banke district. Although locals have raised the issue of poor drainage time and again, the authorities concerned have been turning a blind eye to the problem.

“Our drainage system is pathetic. All the canals are filled with garbage, preventing the draining of rain water. This has been inundating many parts of the sub-metropolis time and again,” said Lokraj Timilsina of Nepalgunj-9.

Another local, Ramesh Regmi of Nepalgunj-5, said the blocked drainage pose risks of fatal accidents. According to him, there are increased risks of children falling in ditches and canals. “Most of the canals and ditches don’t have covers. Children can easily fall into them and get drowned. But the sub metropolis has not bothered to address the problem.”

The Integrated Urban Development Project supported by a grant from the Asian Development Bank has been going on in the district for the past two years. Under the project, road and canal construction works are ongoing in various areas of the sub-metropolis. Haphazard work and management of the project has also been a major cause of inundation.

15 households at risk of displacement

LALITPUR, Aug 4: As many as 15 families are at high risk of displacement in Lalitpur district due to landslide... Read More...