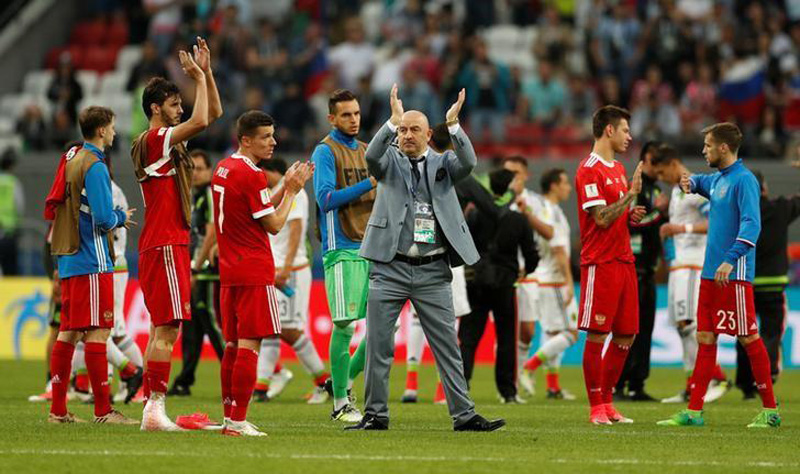 Russia's early Confederations Cup exit has sparked a wave of concern among fans as the 2018 World Cup hosts scramble to avoid another embarrassment at next year's finals.

Stanislav Cherchesov's side slumped out of the World Cup warm-up event on Saturday with a 2-1 loss to Mexico that featured shaky goalkeeping and missed chances.

With less than a year to the World Cup finals, Russia are left with few options to add depth to their squad and unlike other countries fighting for a spot in the tournament, they will not have the chance to gauge their strength in qualifying.

Russia's Confederations Cup elimination adds to a long list of poor performances on the international stage, including early exits from last year’s European Championship and the 2014 World Cup finals, tournaments in which they failed to win a match.

President Vladimir Putin suggested this month that the presence of foreign players in the Russian Premier League could be thwarting the development of homegrown talent and conceded the country had not paid enough attention to youth development.

Russia also has work to do to increase participation levels.

Some 2.7 million people -- approximately 1.8 percent of the population -- play football in Russia, the RFU said this year.

In comparison, just over 11 million people in England, or about 20 percent of the population, say they play some form of football, according to a 2015 report by the English FA.

For some Russian officials, only time can turn the tables for their national team, which slipped to a record low of 63rd in FIFA's world rankings this month.

“Youth sport collapsed in the 1990s,” lawmaker Dmitry Svishchev, who serves on the Russian parliament’s sport and physical culture committee, told Reuters, referring to the decade of political and economic instability following the Soviet Union’s collapse.

“This system started working again in the early 2000s, and I hope the results of this will show in the next five years.”

All the players in Russia’s Confederations Cup squad play in the domestic league, a situation some pundits say has sheltered them from high-calibre competition and ultimately hindered their development.

“Our domestic championship does not produce good enough players for us to even think we can contend for anything,” former Soviet national team player and commentator Yevgeny Lovchev told Reuters.

“The league is weak. CSKA (Moscow), Spartak (Moscow) and Zenit (St Petersburg) only play among themselves and players have no opportunities to learn," he added, referring to the clubs who dominated the Russian championship last season.

In European competition, only two Russian clubs have reached the Champions League quarter-finals, with CSKA Moscow exiting in the last eight in 2010, 14 years after Spartak Moscow reached the same stage.

With the possible exception of 21-year-old CSKA Moscow midfielder Aleksandr Golovin, who has been linked by British media with a move to Arsenal, few Russian players look capable of playing at top European clubs.

“No one abroad wants our players,” Lovchev said.

After Russia’s Confederations Cup elimination, Cherchesov said his players had made a “qualitative leap” since last year’s dismal Euros and he hoped they could learn from the experience.

Not everyone was so upbeat, however.

“We shouldn’t have expectations,” Lovchev said. “We should only expect that our guys step onto the pitch and fight for their country.”

Nepal records 845 recoveries, 136 new cases and one death on Saturday
14 hours ago