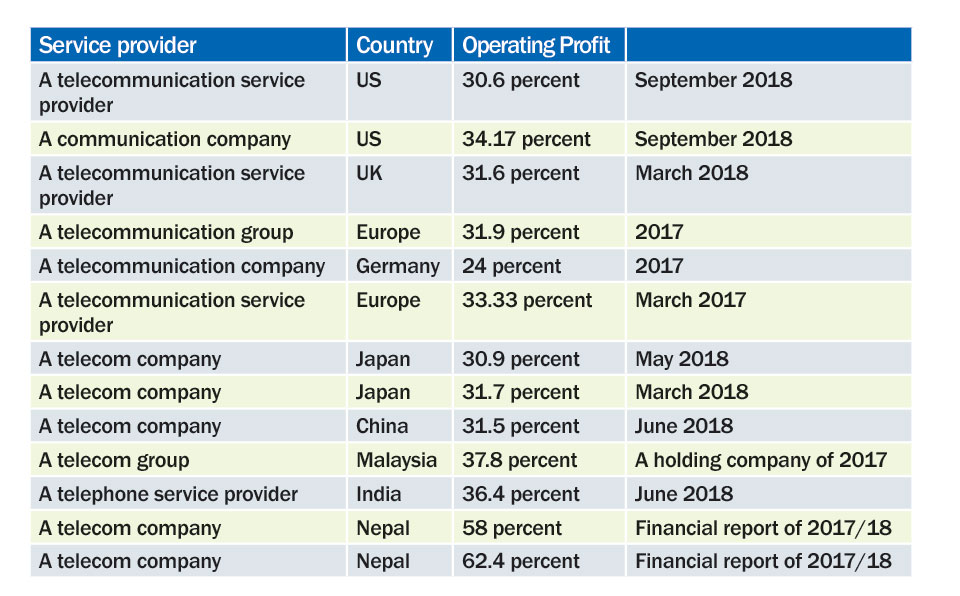 KATHMANDU, April 14: Telecommunication service providers in Nepal are charging exorbitant tariffs and prices to consumers for mobile and telephone services, according to the audit report of Office of the Auditor General (OAG).

The high profitability of telecommunication service providers has raised the eyebrow of the supreme audit institution of the country which has concluded in its annual audit report that they are operating at huge profit margin at the expense of consumers.

Comparing the operational profit of Nepali telecommunication companies with some unnamed service providers in other countries, the OAG has concluded that Nepali consumers are compelled to pay exorbitant charges.

There are two telecommunication companies in the country that provide mobile and telephone services across the country while services of three companies are in operation in certain parts of the country.

The OAG has taken high operating profit as a measure to conclude that telecommunication companies are reaping high amount of profit by charging heftily to their consumers.

“As the operating profit of Nepali telecommunication companies has remained between 58 percent to 62 percent compared to 24 to 37.8 percent of operating profit of their peers in other countries that we have studied, the share of profit in the charge of the services of domestic companies to consumers is very high,” said Auditor General Tanka Mani Sharma (Dangal), while releasing the audit report on Friday, calling for the price regulation of telecommunication services in the country.

The concern of the OAG over the high profitability of telecommunication service providers comes in the wake of growing complaints that the tariffs and service costs have not gone down much despite rising competition in the market.

In its report, the OAG has said that the consumer interest has not been protected as the people have to buy telecommunication services at high cost.

PM Oli's remarks on Ayodhya not linked to any political subject and have no intention at all to hurt anyone’s sentiments: Foreign Ministry
28 minutes ago