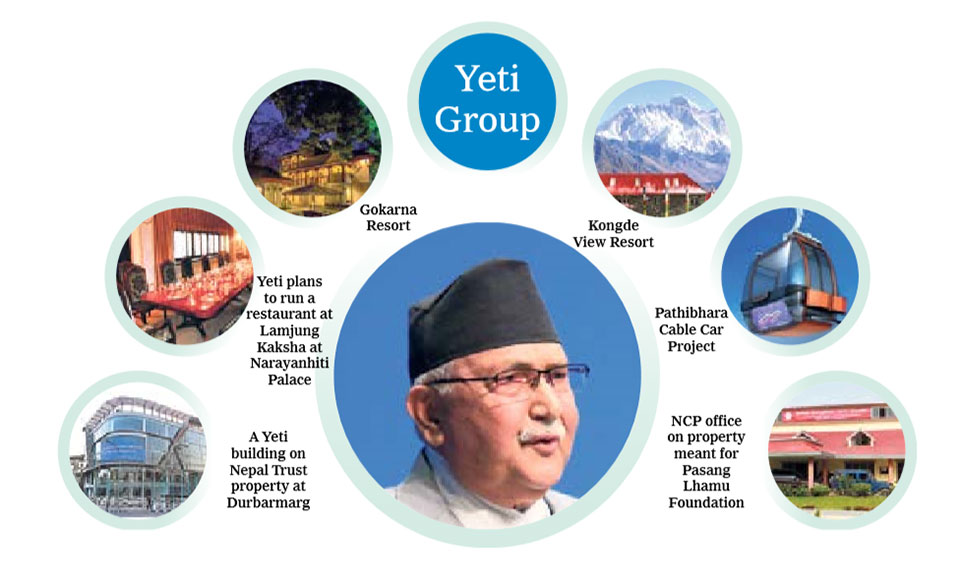 KATHMANDU, Dec 23: A chronology of the events showcases how Yeti Group, owned by late Ang Tshering Sherpa, has benefited from its political connections. Prime Minister KP Oli and Sherpa’s relationship goes back to decades. Prime Minister Oli’s close associates say he was “deeply pained” by the sudden death of Sherpa, along with Tourism Minister Rabindra Adhikari, in a helicopter crash earlier this year. The close “friendship” has finally paid off handsomely for the Yeti Group. The group has secured several prime public properties including Nepal Trust property worth billions of rupees over the last few years. The property locations range from Kathmandu proper to the Everest Base Camp.

STORY OF KONGDE RESORT
The Yeti Group has managed to transfer the ownership of land inside the Sagarmatha National Park to its name to establish Kongde View Resort. A total of 52 ropani [1 ropani is 5476 sq ft] of land inside the UNESCO World Heritage Site, was awarded to the group, as a Supreme Court decision made on Bhadra 5, 2074, was in their favor.

Earlier on Ashadh 23, 2066, the Commission for the Investigation of Abuse of Authority (CIAA), had instructed the Land Revenue Office, Solukhumbu to bring the land under government ownership. The ownership of the disputed land was transferred to Sonam Lakpa Sherpa, the chairman of Yeti Group, from Dadiri and Lakpa Tenzing Sherpa.

Pathibhara Cable Car
In its June issue, the Himal Khabarpatrika wrote, “It’s still unknown why late tourism minister, Rabindra Adhikari, flew to assess the feasibility of Chuhandanda Airport in Terhathum in February. Minister Adhikari and the team were flown to Terhathum in a helicopter of Dynasty Airlines, a subsidiary of the Yeti Group. Before the helicopter crash in Pathibhara, where all passengers and crew members died, Minister Adhikari had said in Chuhandanda, ‘I am here because the prime minister wanted.’”

It was reported that the Yeti Group wanted to apprise the minister of the 2.5 kilometers long Pathibhara Darshan Cable Car project, for which the group had secured permission. The 56th report of the Office of the Auditor General stated that the 80 years lease agreement was illegal.

Republica has found that Fungling Municipality of Taplejung granted permission to operate Pathibhara Devi Darshan Cable Car Pvt Limited, owned by the Yeti Group. The project joins Pathibhara Temple from Kaflepati. The municipality granted the award without publishing it in the local gazette. Clause 102 (3) of the Local Government Implementation Act 2074 requires that the local governments should publish locally-enacted laws in their respective gazettes and without the publication the laws cannot be implemented.

In Shrawan 2074, the first municipal assembly of the municipality had granted the permission. However, documents show that the company registered its application only on Jestha 9, 2075, ten months after the assembly decision. A letter of permission was issued on Jestha 14, 2075 for 80 years, with the current 40 years permission to be extended to another 40.

Yeti Group using its political influence also managed to shift the cable car project to the Ministry of Federal Affairs and General Administration (MoFAGA) from the Ministry of Physical Infrastructure and Transportation (MoPIT), according to a source at MoPIT.

The project was shifted to another ministry following an application of the company to the local government. Nepal Gazette of Asar 20, 2075, has empowered the MoFAGA to manage issues related to “Rajjumarga Cable car”.

Illegal appointment of board members at Nepal Trust
A provision in the Nepal Trust Act (Clause 7) clearly mentions that anyone with conflict of interest should not be appointed to the board. However, the Yeti Group’s Sita Ram Sapkota was appointed to the board on Baishakh 17, 2076. Sapkota is marketing chief at Altitude Air Pvt Ltd, which is also a subsidiary of the Yeti Group. Another board member Yangzom Sherpa is also a close friend of late Ang Tshering Sherpa, according to a source at the Trust.

Before appointing the members at the Nepal Trust Board, the government amended the act, paving the way for such appointments. Deputy Prime Minister Ishwar Pokharel currently chairs the board with six other members, three of whom are appointed by the government. A secretary from the Office of the Prime Minister and Council of Ministers (OPMCM) and executive secretary of Nepal Trust, a joint secretary of the Trust who also acts as member secretary, are the ex-officio members of the board. As per the earlier provision, the board would be chaired by the home minister and the government’s chief secretary would be vice-chair and other members were secretaries from five different ministries, four members nominated by the government and executive secretary of the Trust, who also remained as member secretary.

Secretaries of the ministry had reportedly boycotted various board meetings in their silent resistance against the prime minister’s instructions, which prompted the prime minister to revisit the governing law of the Trust.

“The current provision allows the prime minister to appoint cabinet ministers and other independent members to the board as per his will,” says a highly-placed official at OPMCM.

The current members include Hari Poudel, secretary at the OPMCM, Gajendra Thakur, secretary of the Nepal Trust. The three independent members appointed by the government include Sita Ram Sapkota, Yangzom Sherpa and Prabin Raj Dahal.

The Saga of Gokarna Resort
The government has extended the lease period of Gokarna Forest Resort to Yeti Holdings Private Limited for another 25 years.

A cabinet meeting held last Monday extended the lease period of Gokarna Forest Resort for 25 years before the current lease agreement expires in 2025. The resort has been leased at a substantially cheaper rate.

However, Yeti Holdings had managed to buy 100 percent of its shares illegally after a meeting of the Executive Committee Board of Nepal Trust on February 9, 2014 decided to allow LM Suvir Brothers to sell away its entire share to Yeti Holdings against the terms and conditions of the agreement.

“The agreement was made between Department of Crown Property, Royal Palace and LM Suvir Brother, which is entitled to hold its 51 percent share until the expiry of the contract,” Karki said, adding, “It does not allow any changes for the Yeti holdings to extend the contract.”

UML HQs housed illegally
The translocation of the erstwhile UML party headquarters to Pasang Lhamu Foundation in Dhumbarahi also depicts the deep ties between Prime Minister Oli and the Yeti Group. The foundation is a property of Sherpa family and the land was provided to the Academy, which was established to honor Pasang Lhamu Sherpa, the first Nepali woman to scale Mt Everest. Pasang Lhamu is the sister-in law of late Ang Tshering Sherpa and wife of Lakpa Sonam Sherpa, the current chairman of Yeti Airlines.

It is against the existing laws to establish the offices of a political party on government-owned premises or premises provided by the government to the foundation’s exclusive use.

The government, in 2063 BS, provided 4 ropani and 5 ana of land to the Pasang Lhamu Foundation for its own use.

Clause 21 of the Political Parties Related Act 2073 BS states that political parties cannot take over or use public or community-owned property. “This is a blatant violation of the rules governing such land. It is illegal,” argued advocate Om Prakash Aryal. Such property cannot be used for any purpose other than the originally stated one,” he said.

Illegal lease of a prime land in Durbarmarg
In its June issue, Himal Khabarpatrika wrote, “… the Yeti Group is considered expert in making decisions in its favor with its strong political connections. The 77th report of the Office of the Auditor General has mentioned that it was illegal to award a prime land (one ropani and 14 ana) located in front of the Narayanhiti Royal Palace to the Yeti Group for 30 years, incurring a loss of Rs 5.5 billion to the national treasury. A committee headed by a secretary of the Trust to evaluate the financial proposal earlier suggested to the government to lease the land for 30 years at Rs 6.45 billion, but the final contract was made for just Rs 1.49 billion, which also includes the cost of the new building.

The weekly further added, “The government has not given due attention to the suggestions of the Office of the Auditor General. The CIAA also provided a clean chit to the deal saying no irregularities were found in the lease deal.”

“The Trust Act was amended to benefit the businessman with a new provision that allows the trust to utilize its property for the purpose of tourism and business,” the weekly wrote. The earlier provision in the Act allowed the use of property for academic and education institutions only.

It is an open secret that the promoters of the Yeti Group enjoy excellent relations with the top political leaders, the weekly reported.

Advocate Sushil Adhikari terms the deal as illegal. “A favorable law has been enacted to take decisions to favor a particular party,” he argued.

Gumba Connection
Prime Minister KP Oli managed his time to fly to Lumbini to inaugurate Ang Tshering Sherpa Gumba on Jestha 4 this year. According to highly placed source at Lumbini Development Trust, the 14 ropani of land was provided to the Sherpa family by a direct instruction of the Prime Minister, who is the patron of the Trust. This is a clear breach of the law and the public’s trust on the prime minister to protect, preserve and promote the best use of public property.

Final preparation to let Yeti open a restaurant inside Narayanhiti

Thamserku, a sister company of the Yeti Group, has started preparations to operate a restaurant inside the Narayanhiti Royal Palace, senior officials at the Ministry of Culture, Tourism and Civil Aviation informed.

They have proposed to operate a restaurant covering Lamjung Kaksha and surrounding areas, they said, adding that the Narayanhiti Museum is now managed by a development committee, upon the request of Thamserku. Lamjung Kaksha was used by the Royal family to organize banquets during the visits of foreign dignitaries.