How will it end? 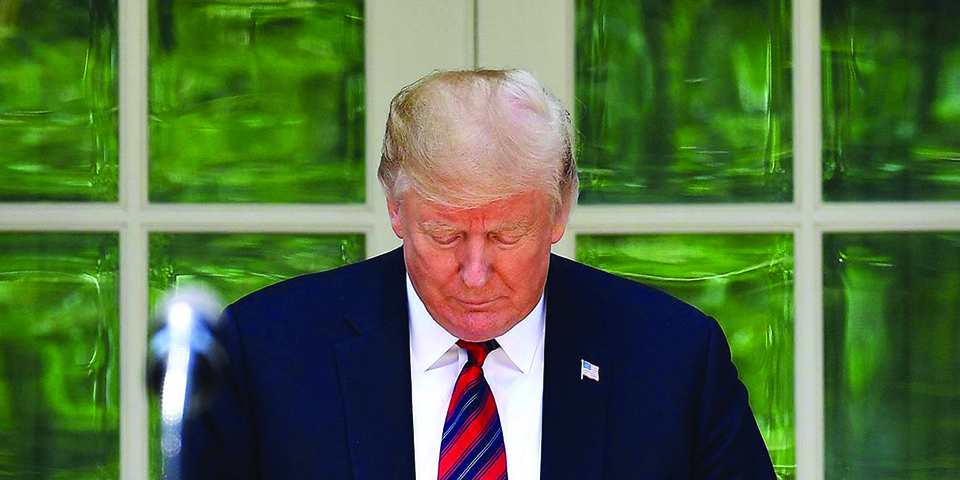 After 117 consecutive months of economic expansion, the US could soon find itself in a painful recession, owing to disruptions caused by Trump’s trade war

HONG KONG – Dashing hopes of a quick agreement on trade relations with China, US President Donald Trump’s administration has imposed punitive tariffs on another $200 billion of Chinese goods. Now that the Chinese government has responded with new tariffs on $60 billion of US products, the United States is threatening tariffs targeting yet another $300 billion of Chinese imports. Both sides are now digging in for a long fight—largely because Americans have yet to feel the pain of Trump’s policies.

China has understood Trump’s transactional style for some time. But it only recently began to appreciate fully the significance of Trump’s “America First” doctrine, which according to US State Department Policy Director Kiron Skinner, rests on four pillars: national sovereignty, reciprocity, burden-sharing, and regional partnerships.

National sovereignty and reciprocity are standard features of any country’s foreign policy. They form the foundations of the 1648 Peace of Westphalia, which recognized after the Thirty Years War that sovereign states have their own interests to defend, and must engage with other states on a reciprocal basis.

But the Trump administration often takes reciprocity too far, weakening America’s capacity to build and maintain partnerships, regional or otherwise. Indeed, under Trump, the US has undercut the interests of its closest allies for its own narrow benefit, even threatening to impose broad tariffs on automobile and auto-part imports from the European Union, Japan, and South Korea, claiming that they pose a national security threat.

In any case, the active ingredient of the Trump doctrine is burden-sharing. Skinner interprets this narrowly, focusing on the need for America’s NATO allies to increase their defense spending. What she does not acknowledge is that the US is also forcing the rest of the world to share the burden of its unsustainable structural savings deficit.

The US consistently runs both a fiscal deficit—with total expenditure (of which defense comprised 14.8 percent in 2017) significantly exceeding its income—and a current-account deficit. If those twin deficits run at a trend rate of over 3 percent of GDP per annum, net US debt to the rest of the world—currently at 40 percent of GDP—will double in less than 24 years.

The Trump administration insists that the only deficit to worry about is the bilateral trade deficit with China. But even if China bowed to US demands and eliminated the bilateral deficit, America’s imbalance of saving and investment would merely shift its external deficit—like water in a squeezed balloon—toward other surplus economies, like the EU, Japan, and South Korea (the targets of the threatened automotive tariffs).

For decades, the US saving shortfall seemed like a problem to be managed, not solved. Since the US started running structural deficits in the 1970s, there has been a kind of global “grand bargain” on the topic. The world willingly finances America’s current-account deficit in US dollars; in exchange, the US acts as a guarantor of free trade and global security.

The Trump doctrine upends that bargain. By weaponizing America’s economic leverage (including the US dollar), it aims to force the world to uphold its end, with no guarantee that the US will respond in kind.

This approach will end up costing virtually everyone—beginning with American consumers. With its trade war, the Trump administration is engaging in tax subterfuge. Historically, governments have addressed their excessive debts with tax increases, spending cuts, higher inflation (with negative real interest rates), or, in the case of the Roman Empire, conquest of creditors.

It seems to be politically impossible for the US government to raise taxes domestically. So the Trump administration has found a workaround: tariff increases end up serving effectively as consumption taxes, but because they can be blamed on foreigners, they are more palatable to the American public.

Where will it go?

But today’s prosperity hinges mainly on the temporary effects of budget-busting tax cuts and quantitative easing by the US Federal Reserve, which expanded its balance sheet by $3.6 trillion from 2007 to 2017 (it has since reduced that total by $391 billion). Historically low interest rates and liquidity-inflated asset bubbles financed the fiscal deficit and enabled the household sector to deleverage. It was thanks largely to QE that US net wealth increased by $33.6 trillion from 2010 to 2018.

That wealth was not, however, shared equally; on the contrary, the QE-centered approach has deepened domestic inequality. For example, every time the S&P 500 has dipped over the last decade, corporate share buybacks (amounting to $5 trillion from 2008 to 2018) provided a cushion. This was technically good for growth: the S&P 500 index rose by a total of 319 percent  from its 2009 trough to its March 2019 peak. But Trump’s trade war is threatening even those narrowly shared (and, for the Fed, costly) gains.

For the top 25 S&P companies—with a combined market capitalization exceeding $20 trillion—just under one-third of revenues come from China and Taiwan (weighted average), meaning that tariffs on Chinese imports will hit profits. Tech giants that depend on chips, components, and software sales to China—amounting to 20-65 percent of total revenue—will   face particularly high costs, as will US shoe importers.

The trade war seems not to have caused much pain yet, because financial markets assume (perhaps wrongly) that central banks will bail them out with more QE. But after 117 consecutive months of economic expansion—compared to an historical average of 48 months— the US could soon find itself in a painful recession, owing to disruptions caused by Trump’s trade war. Perhaps then it will be ready for a truce.

No matter how hard Abe tries, the US and Japan remain divided on the same issues as always ... Read More...