How relevant are DIs? 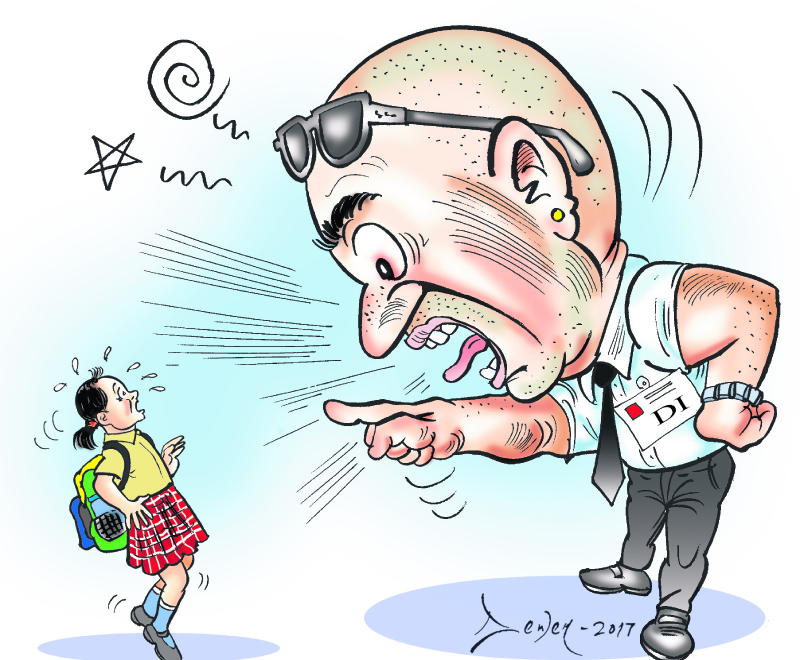 KATHMANDU, April 11: “The Discipline Incharge (DI) in my school used to beat me with a thick stick and usually pull my hair,” said 16-year-old Prashant*, an SEE-appeared student.

The fear of DIs among school-  and college-going students is   increasing as the trend of hiring DIs to “control” students has become a common practice among private schools and colleges.
Prashant had never thought that he would dread to go to school. School used to be his safe haven to hang out with friends until he started getting attention of his DI who only seemed to create trouble for him.

Soon he started making excuses not to attend classes which caught his parents’ attention. But when his parents complained to the school authority they only got an apology and promise that their son would now not be whacked with a stick but would still be punished if he failed to follow the rules.
This way, Prashant’s school dismissed the complaint and failed to reflect on the psychological impact the regular punishments of DI had on him.

“I would have understood if my DI had just talked to me instead of using a stick. And, it would have also saved me from the stress I had to face. In a way, my encounter with the DI ruined my school experience,” added Prashant.

Discipline can be defined as the practice of training people to follow or obey the rules but is it necessary to use violence, or fear, to make students follow the code of conduct? Respect and obedience becomes necessary to maintain discipline inside school premises. But is it a must to create fear among students so as to make them follow the rules?

“Discipline Incharge, in itself, is not a bad concept, but the way they are portrayed by schools is terrible,” said Binod Karki, a teacher at Radiant School, Kalanki. Discipline should be maintained everywhere, but not through fear but through respect. Students themselves should be made feel the necessity of following the code of conduct, instead of coercing them.

Karki, who has 14 years of teaching experience, believes one of the reasons the school authorities hire DIs might be because parents themselves are result-centric. Instead of hiring DIs, hiring counselors would have been fruitful.

In the flip side, there are some certain DIs who are loved by the students. “My DI was one of the nicest person I have ever met. Instead of whacking me, he used to listen to what I had to say and counsel me,” said Natasha, who is now an undergraduate student. While most of the DIs in Kathmandu seem to care only about the dress code, some tend to understand the students’ psychology and counsel them according to the situation.

This raises a question among other DIs who only seem to care about the code of conduct: does following a certain hair trend determine the capability and academic excellence of a student? From implementing the rules of middle parting hairstyle among girls to setting the measurement for the width of the pant, DIs seem to cause panic among students who find these rules unnecessary.
Punishment should not be used as a medium to create obedience and respect among students. To some extent, parents are also responsible. Why schools resort to threaten students to follow simple rules? Is it because there was something wrong in their upbringing?” said Usha Pokharel, a psychologist. She argued at times the parents need to retrospect when they find some problem in their children.

When students defy certain rules it means that they disagree with the system and they want to have a say.

Discussion with students about any new rules would help settle differences and misunderstanding between student, teachers and the administration. Many believe that introduction of new rules in consultation with all the stakeholders would be a better approach instead of just imposing one rule after another to maintain an order in school or colleges.

Pokharel also underscored that punishment doesn’t necessarily yield positive impact. Action taken by DIs is often found to have a negative impact on young students. Such actions may sometime result in untoward incidents.

She also reflected that young adults who are usually tormented at school by DIs for making mistakes should instead be allowed to do what they want because it’s only through mistakes that students and young adults learn. “What the schools need to do is to make students realize their mistakes,” added Pokharel.

Discipline is an important factor governing different aspects of life especially when you are a student. But discipline should never be imposed. Instead the person implementing it should be able to guide young adults in difficult journies of life.
*Name changed.

Indian ambassador hands over one million doses of COVID-19 vaccine to PM Oli
9 hours ago
Two edible oil producers slapped cash fine of Rs 300,000 each for charging exorbitantly high prices for their products
19 hours ago

Why is India dragged time and again into Nepal’s domestic politics?
7 hours ago