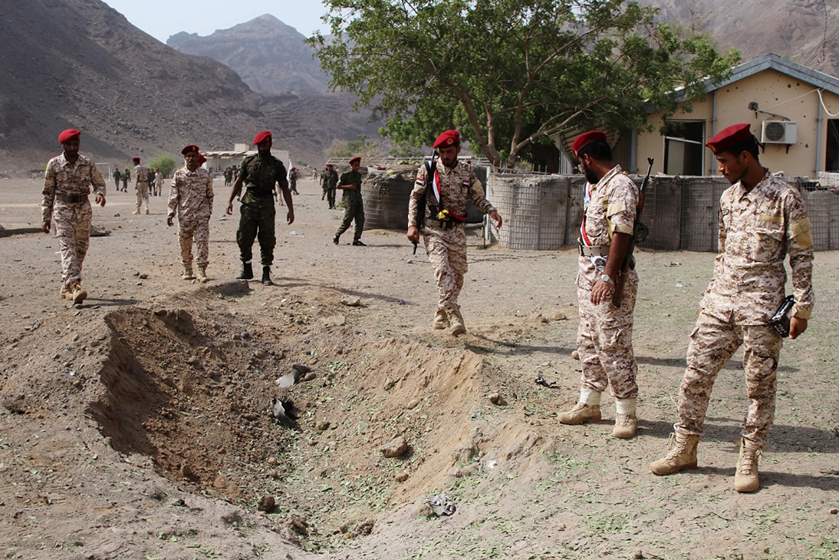 ADEN, August 1: Yemen’s Iran-aligned Houthi movement said it launched missile and drone attacks on Thursday on a military parade in Aden, the seat of the Saudi-backed government, that killed more than 30 people according to medical and security sources.

Soldiers rush to help the injured following a missile attack on a military parade during a graduation ceremony for newly recruited troopers in Aden, Yemen August 1, 2019. REUTERS/Fawaz Salman

A Reuters witness saw nine bodies on the ground after an explosion hit a military camp belonging to the Yemeni Security Belt forces backed by the United Arab Emirates, which is a member of the Saudi-led military coalition battling the Houthis.

The attack killed at least 32 people, including a commander, a medical and a security source told Reuters.

Soldiers screamed and ran to lift the wounded and place them on trucks. Red berets lay on the ground in pools of blood.

Medecins Sans Frontieres tweeted that tens of wounded were hospitalized in Aden after an explosion, but later said it was a separate one at a police station on Thursday in the southern port city. It said 10 people were killed and 16 injured there.

The Houthi’s official channel Al Masirah TV said the group had launched a medium-range ballistic missile and an armed drone at the parade, which is described as being staged in preparation for a military move against provinces held by the movement.

It did not mention the police station attack, which a security source said involved an explosives-laden car. It was not clear if the incidents were linked but previous car attacks have been carried out by Islamist militant group al Qaeda, one of Yemen’s many destabilizing forces.

A pro-government military source and security sources identified the commander killed in the military parade as Brigadier General Muneer al-Yafee, a leading figure of the southern separatists.

“The blast occurred behind the stand where the ceremony was taking place at Al Jalaa military camp in Buraiqa district in Aden,” the Reuters witness said. “A group of soldiers was crying over a body believed to be of the commander.”

Yafee had just stepped off the stage to greet a guest when the explosion took place. Flags of former South Yemen and those of leading coalition members were fluttering as the military band was waiting for its cue to start playing.

The Western-backed Sunni Muslim coalition led by Saudi Arabia and the UAE intervened in Yemen in 2015 to try to restore the internationally recognized government ousted from power in the capital Sanaa by the Houthis in late 2014.

The government of Abdu-Rabbu Mansour Hadi controls the southern port city of Aden. The Houthi movement, which says its revolution is against corruption, holds Sanaa and most of the biggest urban centers in the Arabian Peninsula nation.

The parade “was being used to prepare for an advance on Taiz and Dalea,” Al Masirah cited a Houthi military spokesman as saying.

There was no immediate comment from the Yemeni government or the coalition.

Last month the UAE said it was scaling down its presence in Yemen, pulling some troops from areas including Aden and the western coast deployed for operations against the Houthis in the main port city of Hodeidah, where a U.N.-brokered ceasefire has been in place since last December.

An Emirati official said the UAE would not leave a vacuum in Yemen as it had trained 90,000 Yemeni forces, drawn from among southern separatists, including Security Belt forces, and coastal plains fighters.

The Houthis have stepped up cross-border missile and drone attacks on Saudi cities and the coalition have responded with airstrikes on Houthi military sites, mostly around Sanaa.

Al Masirah said the Houthis launched a long-range ballistic missile on an “important” military site in Dammam in Saudi Arabia’s Eastern Province on Thursday. There was no immediate confirmation from the coalition or Saudi authorities.

The escalating violence could complicate U.N.-led efforts to implement a troop withdrawal in Hodeidah, the main entry point for Yemen’s commercial and aid imports, to pave the way for political talks to end the war amid mistrust among all parties and competing agendas of Yemen’s fractious groups.

The more than four-year conflict, widely seen in the region as a proxy war between Saudi Arabia and Iran, has killed tens of thousands and pushed Yemenis to the brink of famine.

ADEN, Aug 11: The Saudi-led coalition intervened in Aden on Sunday in support of the Yemeni government after southern separatists... Read More...

MAKWANPUR, March 13: Two people died and 22 others were injured when a bus carrying wedding attendants fell off a cliff... Read More...