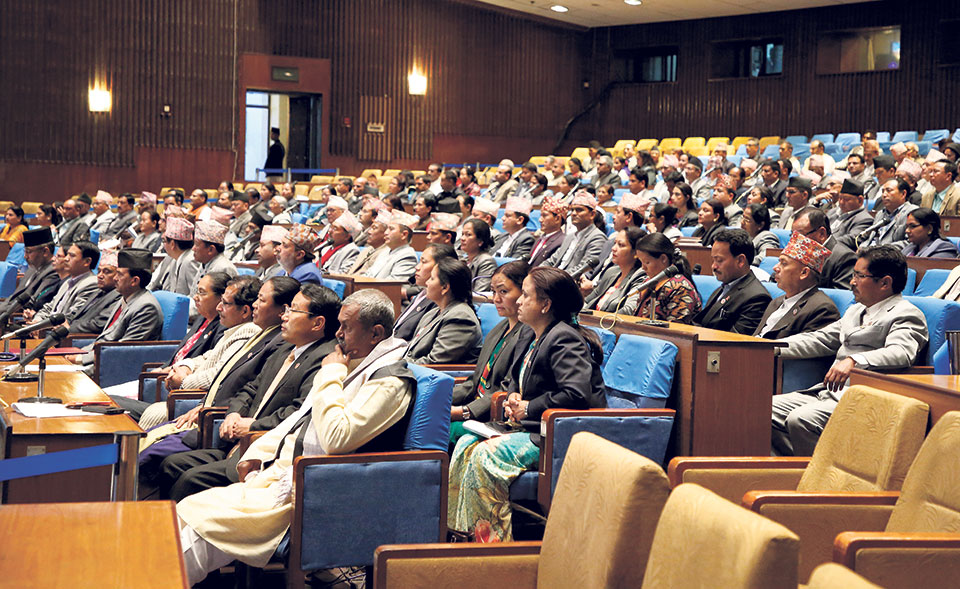 KATHMANDU, March 6: The historic first sessions of both houses of parliament began Monday by endorsing their respective interim working procedures.

The eldest members Tara Devi Bhatta, 69, and Mahantha Thakur, 75, respectively chaired the first meeting of the first session of the National Assembly (NA) and the House of Representatives (HoR) held at the International Conference Center in New Baneshwar on Monday. The parliament has formally begun its business three months after the parliamentary elections and a month after the upper house elections.

The federal parliament consists of a 59-member NA and a 275-member HoR.

The first meetings of the upper house and the lower house appointed lawmakers to conduct their businesses in the absence of the chairman and the speaker.

A letter sent by President Bidya Devi Bhandari summoning the first session of parliament was read out in the beginning of the first meeting of the federal parliament.

The next meeting of the federal parliament has been scheduled for 11 am Tuesday.

On Sunday, three months after the elections, majority of the members of the HoR and NA had taken oath of office and secrecy amid a special function.

The Parliament Secretariat has announced the schedules for holding the election for the House Speaker on March 10, the prime minister's vote of confidence on March 11 and election of the National Assembly chairperson on March 14.

KATHMANDU, March 5: The first meeting of the federal parliament is scheduled for Monday afternoon after the lawmakers took the oath... Read More...