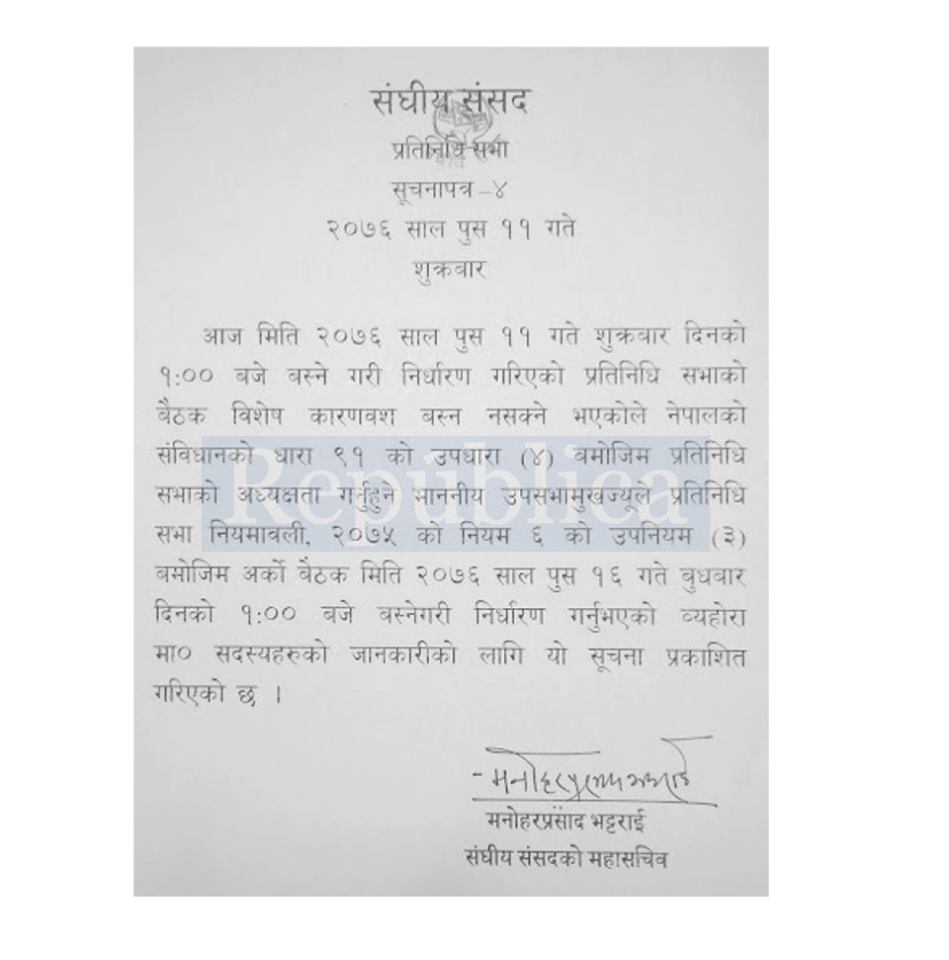 KATHMANDU, Dec 27: A meeting of the House of Representatives called for 1 pm today has been postponed to January 1.

In a notice to the parliamentarians on Friday, the general secretary of the Federal Parliament Manohar Prasad Bhattarai stated that the parliament meeting has been rescheduled due to special reasons.

It is learned that the meeting has been postponed as the ruling Nepal Communist Party has failed to pick its candidate for the post of speaker of the House.

The post has been lying vacant since October 1 following the resignation of Krishna Bahadur Mahara after being accused of attempted rape by an employee at the parliament secretariat.

With a few leaders from both former UML and former Maoist factions staking a claim for the post of speaker, the NCP leadership is in a fix over how to select a candidate. Leaders have warned this would affect the unity of the party’s rank and file during the by-polls.

Party chairman and Prime Minister KP Oli, who represents the UML faction and party executive chairperson Pushpa Kamal Dahal representing the former Maoist faction, have been planning to pick leaders loyal to them for the speaker’s post.

The Maoist faction has been mounting pressure on both Oli and Dahal to pick the candidate from the former Maoist side stating that the position was allotted to the same faction during Mahara’s appointment in 2018.

Agni Prasad Sapkota, Haribol Gajurel, Dev Gurung and Pampha Bhusal are in the fray from the Maoist side for the speaker’s position, according to the leaders privy to the matter.

Similarly, Deputy Speaker Shivamaya Tumbahamphe has been claiming the position stating that she has to quit the position for the sake of the party.

The NCP has asked her to resign from the position because the constitution bars the same political party to elect both speaker and deputy speaker.

House meeting put off for a week

KATHMANDU, Dec 14: The meeting of the House of Representatives (HoR) has been put off for a week. ... Read More...

KATHMANDU, Nov 6: The Communist Party of China (CPC) has extended sorrow over the demise of Sita Mahara, wife of... Read More...

KATHMANDU, Oct 3: Pressure is mounting on the ruling Nepal Communist Party (NCP) to launch an internal inquiry into allegations against... Read More...