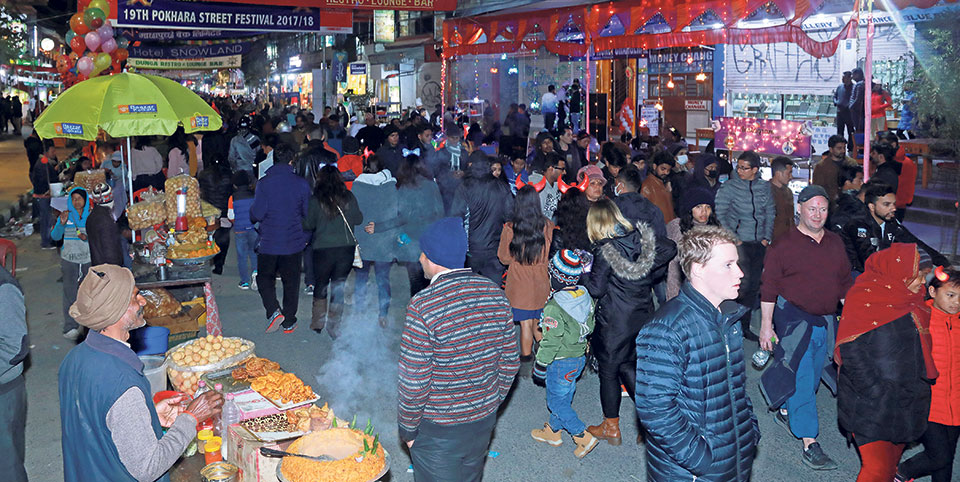 POKHARA, Jan 1: Temple Tree resort is gleaming with domestic tourists as full-fledged winter festivities kick on in Pokhara. Of its 68 rooms around 25 percent of the rooms are occupied by domestic tourists.

Businesses say that people who come for a short-term stay in the city typically spend a higher amount of money which has helped domestic tourists get recognition in the foreign-dominated playing field. “The domestic tourists spend on par with the foreign ones, which has helped in expanding opportunities in the market,” says a bright looking Bharat Raj Sharma, a tour operator.

“The cheaper hotels were financially secure during the offseason, but the recent trend shows that the higher-end hotel also has been bolstered by high spending domestic tourist during this time of the year,” Sharma further adds.

The annual Pokhara street festival has helped heat up the tourism sector in this season by attracting domestic tourists as winter cools down the frequency of foreign tourists in the region. The street fest organized by Restaurant and Bar Association of Nepal (RBR) to bring in domestic tourist during this time of the year has been a huge hit.

Gupta Giri, Residential Manager of the hotel, says, “We need tourist, whether they are domestic or residential does not matter to us.” He further adds, “We see a 25 percent increase in the flow of tourist during the street festival, especially the domestic numbers, which has helped to boost our confidence.”
Similarly, Krishna Acharya, manager of Temple Tree Resort, says, “The increase in domestic tourist in the off-season  over the year have deeply relived us financially.”

“The higher-end hotels have put up special events, which have them get traction to attract more customers,” said General Manager of Barahi Hotel. The general manager, Raj Kumar KC, further adds: “The domestic tourist are increasingly become more important by the year.”

President of Paschimanchal Hotel Association, Bikal Tuchal, says, “The frequency of Indian tourists is also increasing along with domestic ones in this time of year.”

“The numbers of tourist visiting the city has increased by about 25 percent,” claims Gopi Bahadur Bhattarai, Vice-president of Pokhara Tourism Council.” Bhattarai further adds, “The equal priority should be given to domestic tourist to expand the opportunities for the tourism industry.”

KATHMANDU, Dec 30: The Gurung community is marking the 'Tamu Lhosar' as the New Year from today by bidding adieu... Read More...