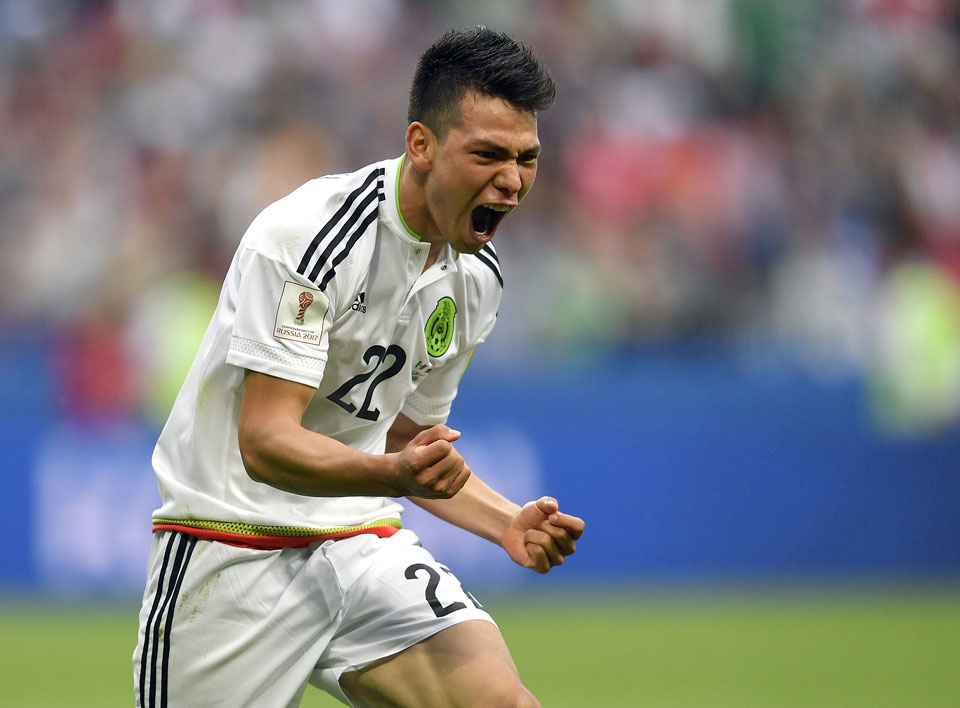 KAZAN, June 25: Host nation Russia fought valiantly but could not avoid early elimination at the Confederations Cup after a 2-1 loss to Mexico on Saturday, a result that secured the Mexicans a place in the semifinals of the World Cup warm-up tournament.

Needing a victory to advance from its difficult group, the hosts played well and took the lead with a goal by Alexander Samedov in the first half, but the experienced Mexicans equalized through Nestor Araujo before halftime and secured the victory early in the second with a goal by Hirving Lozano after a mistake by Russia goalkeeper Igor Akinfeev.

The Russians had plenty of chances, but poor finishing kept them from earning a better result. Several players missed clear scoring opportunities throughout the match in front of 41,585 fans at Kazan Arena.

Russian players gathered in the middle of the pitch to salute fans after the final whistle and were applauded by the crowd.

"We managed to show good football," Russia coach Stanislav Cherchesov said. "We are making steps in the right directions."

Russia played a man down from the 68th minute as Yury Zhirkov was sent off with a second yellow card, the first player in the tournament to be shown a red card.

Mexico had a second-half goal by defender Hector Moreno disallowed for offside after video review.

"We faced a rival that needed to win and had nothing to lose, and we competed very well against them," Mexico coach Juan Carlos Osorio said. "We are building a team that is showing that it can play against any opponent in any situation. It was an important victory for Mexican football."

Russia was the lowest-ranked team in the eight-nation competition among continental champions plus the World Cup winner and the host nation.

Advancing from the group with European champion Portugal and Gold Cup winner Mexico was seen as a difficult task from the start, but an opening victory against New Zealand had left Russia in position to make it to the semifinals despite a loss to Portugal in the second match.

The opening goal came following a blitz by the Russian attack in the 25th minute. After striker Fedor Smolov struck the post with a long-range shot and Zhirkov had his shot saved by Mexican goalkeeper Guillermo Ochoa, Russia kept possession and sent the ball back into the area, where Aleksandr Erokhin missed a chance before Samedov picked up his pass and sent a precise low shot into the far corner.

Mexico equalized five minutes later after Hector Herrera's long cross into the area found Araujo near the far post. The defender headed the ball into the opposite corner, over goalkeeper Akinfeev.

Akinfeev made a mistake that led to Mexico's second goal after a long clearance by Herrera from near the Mexican area. The ball took a high bounce and started to fall just at the edge of Akinfeev's box. The goalkeeper apparently wasn't sure if he could use his hands and ended up taking too long to commit to the ball with his feet, allowing Lozano to nip in and head it into the open net.

It had been a great start for the Russians, keeping Mexico from creating significant chances and threatening on counterattacks.

The hosts wanted a penalty after Zhirkov fell inside the area in the sixth minute, but he was barely touched by the Mexican defender and the referee let the play continue. They appealed for another penalty about 10 minutes later when Smolov went down in the box after getting tangled up with Araujo, but no penalty was given despite help from video. Play had continued for about 30 seconds before the game was stopped for the review.

Zhirkov had nearly opened the scoring for Russia just a few minutes before the play that was reviewed, but his low left-foot shot went just wide.

One of the best chances for Russia came in the 72nd when substitute Igo Smolnikov sent his shot over the crossbar from very close range.

The hosts had a goal by Samedov disallowed for offside just a few minutes into the second half.

KAZAN, June 19: Title contenders Portugal and Mexico fought out an entertaining 2-2 draw in the Confederations Cup on Sunday,... Read More...

First governor of NRB passes away
43 minutes ago