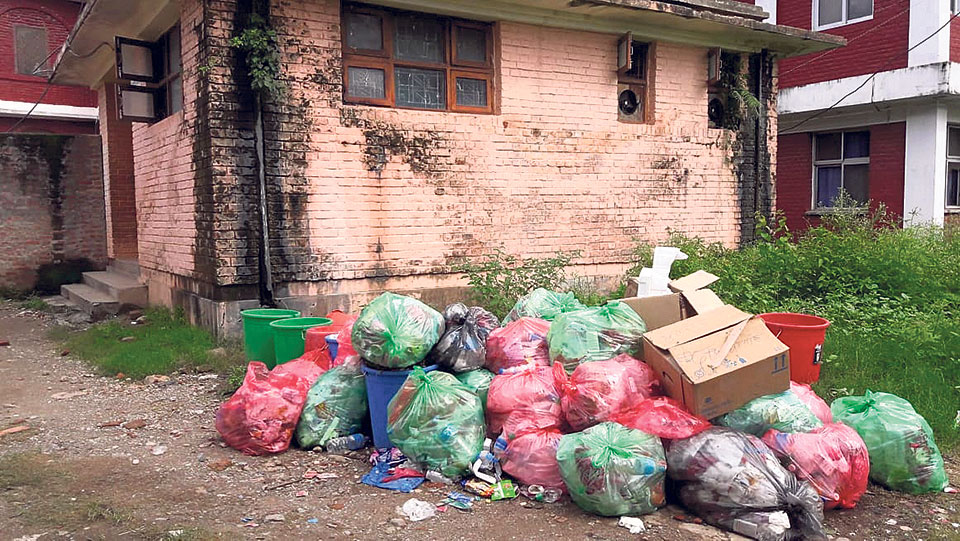 DANG, July 29: A heap of stinking garbage left unattended since days welcomes visitors of the Rapti Academy of Health Sciences in Dang district. Poor garbage management at the institution has badly affected the visitors and the patients alike.

"The hospital looks like a dumping site. When you enter it, you have to cover your nose," said Shaktiram Dangi, chairperson of Ghorani Sub-metropolitan City – 14.

The 'garbage zone' is just beside the maternity ward where newborns and nursing mothers are kept. The babies who have been just delivered have no choice but to breathe the polluted air.

Besides the garbage, the hospital has stinking toilets due to lack of water.

Sanitary pads used and thrown in the toilets are hardly picked and disposed off on time.

"It feels disgusting to see the used pads everywhere around. They don't collect it. Nobody comes to clean these toilets," said a paitent. "I had come for treatment,  but it seems I will get infected instead," she added.  There is a pond near the hospital. And it has not been cleaned for years. All this gives flies and mosquitoes a suitable habitat to thrive.

"This is not like a hospital at all. It is so filthy," said Somati Chaudhari of Sodiyar village who has been staying in the hospital for a few days to take care of her ill sister.  Meanwhile, the hospital's dean Dr Basanta Lamichhane says that the hospital is not that poor in garbage management.

"Such problems surface once in a while when the vehicle of the sub-metropolis does not arrive on time," he said.

KATHMANDU, July 11:Each family in Kathmandu district will in future have to pay Rs 219 per month for garbage collection,... Read More...