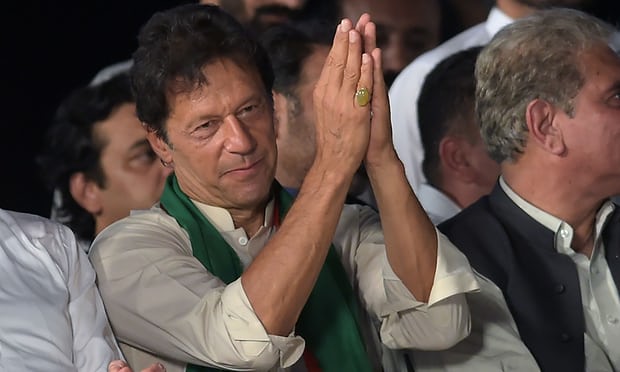 Imran Khan is expected to be the main opponent to Pakistan’s ruling PML-N party during the July election. Photograph: Aamir Qureshi/AFP/Getty Images

Pakistan will hold a general election on 25 July in what could be only the second democratic transfer of power in the nuclear-armed country’s history.

However, turmoil continues to rock the country after former prime minister Nawaz Sharif was ousted by the supreme court in July 2017 on corruption charges and later barred from politics for life.

Sharif was the 15th prime minister in Pakistan’s seven-decade history – roughly half of it under military rule – to be removed before completing a full term. After Sharif was ousted, Shahid Khaqan Abbasi took over the premiership.

Pakistan completed its first ever democratic transfer of power after elections in 2013, when PML-N took over from the Pakistan People’s party following a landslide victory.

“This is the second consecutive parliament to complete its tenure and we are now looking forward to go to the people to get their verdict on our performance,” the finance minister, Miftah Ismail, said.

While PTI is vowing to clean up the country’s rampant corruption, and invest in education and healthcare, PML-N continues to boast of its investment in the country’s rickety infrastructure and courting billions of dollars in Chinese investment.

Since he was ousted, Sharif and PML-N have become increasingly vocal in their confrontation with the country’s military establishment and courts, claiming they are victims of a conspiracy.

Despite the numerous court rulings against PML-N, the party has won a string of recent byelections. It continues to enjoy significant support in the country’s most populous Punjab province, but will enter the election under increasing pressure.

In April, a Pakistan court disqualified the foreign minister, Khawaja Asif, for violating the country’s election laws, while the interior minister, Ahsan Iqbal, was shot in the arm in a suspected assassination attempt in early May by an Islamist gunman.

Sharif also sparked a firestorm earlier this month after suggesting Pakistani militants were behind the 2008 Mumbai attacks, approaching what is seen as a red line in the country by touching on criticism of Pakistan’s armed forces.

Pakistan congratulates Oli on his election as new PM

KATHMANDU, Feb 16: Pakistan has congratulated Nepal on the formation of new government led by K P Sharma oli after the... Read More...